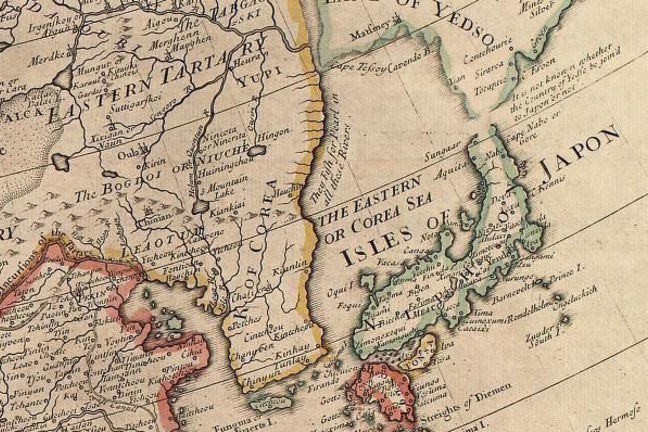 Northeast Asia in 1715, where [Sea of Japan] was once referred as "Eastern Sea."

The next six weeks

Six weeks flies by. However, in our broad study of China and Korea, if we keep to certain focal points while remaining alert to overarching themes, we can cover a lot of historical ground– and that’s what Lips and Teeth is designed to do.

The main focal point, and angle of study, is war. Although this course is not a military history per se, we use the history of conflict on and around the Korean Peninsula to illuminate, through the sudden flash of light created by war, the nature of the China-Korea relationship over time.

The first war, the focus of this week, takes place in the 1590s, when China helps Korea repulse a Japanese invasion.

The second war takes place in the 1890s, when China fails to stop a Japanese invasion of not only Korea, but also China’s own northeast provinces.

The third war, probably most familiar to you, occurs in the 1950s, when China pushes an American-led military coalition out of northern Korea, and re-establishes the division of the Korean Peninsula at the 38th parallel.

So, three wars, like flashes of light in a night sky, will reveal fundamental features of Lips and Teeth.

But our course is not just about battles.

In week two, we will take the long view of how China and Korea interacted during the two centuries of relative peace in between the Manchu invasion of Ming China in 1644 and the British invasion of Qing China in 1839 (better known as the First Opium War).

And in the final two weeks, after having studied the Sino-Japanese War of the 1890s and Korean War in the 1950s, we will examine the fragile peace of the Cold War and current era. The action here is diplomatic and economic, rather than military– although the danger of conflict spiraling out of hand is never far away.

Over the course of our six weeks together, you will meet some of the most colorful men and women of Chinese and Korean history– tough, ingenious generals like Yi Sun-shin and Peng Dehuai, refined Confucian scholars like Pak Che-ga and Huang Zunxian, romantic reformers like Ahn Jung-geun and Sun Yat-sen, cunning, brutal leaders like Mao Zedong and Kim Il Sung. You will also have a chance to peer into original records of the past created by or about such figures, the primary sources out of which scholars weave the “tangled skein” of history, as Henry Adams called it, into a meaningful pattern– a tapestry.

During the course you will also probably run into two young people, one from Korea and one from China, who are very much alive and well. Seulmi Im (from Korea) and Lu Yao (from China), talented graduate students in Yonsei University’s Graduate School of International Studies (GSIS), have worked tirelessly to help build our course. Going forward, Seulmi and Yao will help shepherd you along over the weeks to come, and we are fortunate to have this pair of thoughtful, energetic “sherpas” helping to guide the path to the peak.

Each week, a pair of quizzes will allow you to see how well the course material is sticking with you, and in weeks 3 and 6, a short test will similarly give you a way to check your understanding. If you attempt all test questions, and complete at least 50% of all steps in the course, you can purchase a Statement of Participation.

Hopefully over the next six weeks, you will find answers to questions that feed your curiosity about China and Korea. But be forewarned: the most powerful gift that historical knowledge provides is the capacity to ask better questions. The course will of course impart knowledge, but we will also use the knowledge acquired in order to ask new questions, and create a space in which you can discuss and debate those questions with your fellow students. That, anyway, is the ideal on which social learning is based. Let’s try our best to make the ideal reality.