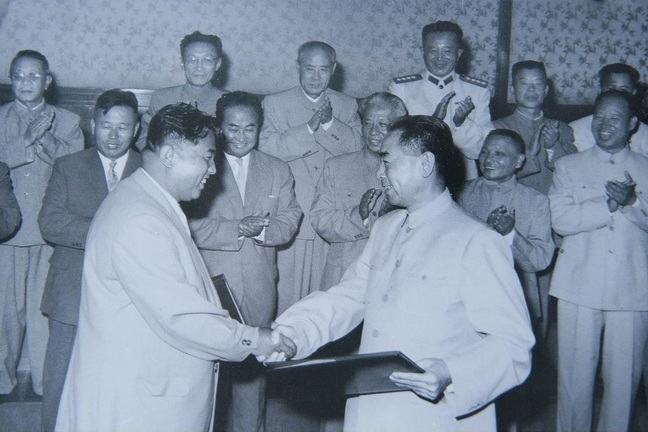 In the years following the withdrawal of Chinese People’s Volunteers from Korea, a great schism erupted that would divide the Communist world for the next four decades. The so-called “Sino-Soviet split” was a Cold War within the Cold War, and North Korea—one of the unfortunate countries neighboring both Communist powers, and with intimate ties to Beijing and Moscow—was profoundly affected. Kim Il Sung had to reinvent his country’s foreign relations strategy, and readjust it constantly based on the intensity of hostility between the PRC and USSR.

Kim visited Beijing in May 1960, with the split now in the open, and the Chinese lobbied hard to woo Kim to their side. Upon his return, Kim evidently was leaning toward Mao. A senior North Korean official later confided in the Soviet ambassador to Pyongyang, “the Chinese tried to win [Kim and other leaders] over and manipulated them in the direction the Chinese needed.” (See the related file for the original source, and explore the rich collection created by the Wilson Center Digital Archives of which it is a part.)

Soviet leader Nikita Khrushchev struck back the following month by inviting Kim to Moscow, where he showed Kim documentation of Mao’s criticisms against the North Korean leader during the tense summer of 1956, when Kim purged rivals aligned with China and Russia. Seeing Mao’s slander of four year’s prior, Kim was furious—or at least convinced the Soviets of his outrage. Back in Pyongyang, “Kim Il Sung spoke with great indignation about the dishonest attitude toward him by the Chinese unbefitting Party members [nepartiynoe], especially by Mao Zedong… Speaking of the policy of the Chinese with respect to Korea, Kim Il Sung declared that they want to turn Korea into a colony of China.”

Was Kim genuinely outraged by Mao’s criticisms of four years past, or was he merely showing the Soviets what he knew they wanted to see?

Wooed by Beijing and Moscow, Kim had to walk a tightrope of remaining friends with mortal enemies. In the summer of 1961 he moved to formalize the bonds by concluding a Treaty of Friendship, Co-operation and Mutual Assistance in Moscow on July 6, and then in Beijing on July 11. Signed by Premier Zhou Enlai and Kim Il Sung, the PRC-DPRK treaty affirmed China’s beloved five principles of peaceful co-existence (mutual respect for state sovereignty and territorial integrity, mutual non-aggression, non-interference in each other’s internal affairs, equality and mutual benefit, and mutual assistance and support). The meat of the treaty was article two, worth reading in full since it remains in effect to this day: “The Contracting Parties undertake jointly to adopt all measures to prevent aggression against either of the Contracting Parties by any state. In the event of one of the Contracting Parties being subjected to the armed attack by any state or several states jointly and thus being involved in a state of war, the other Contracting Party shall immediately render military and other assistance by all means at its disposal.”

As Charles Armstrong points out in his book Tyranny of the Weak, it was precisely the same period when Kim Il Sung began to espouse a national philosophy of “self-reliance”, or Juche, that he was also ironically, and rather effectively, manipulating the Sino-Soviet schism in order maximize security and economic benefits from the two rival capitals of world communism. Beijing ended up with its first—and still today its only—defense treaty ally.