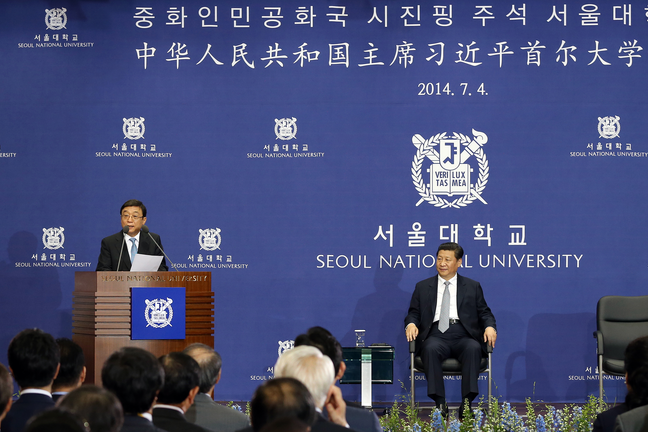 When Park Geun-hye arrived in Beijing for her state visit in June 2013, it was not the first time meeting Xi Jinping.

Back in 2005, when Xi was a mere provincial party chief of prosperous Zhejiang, he visited Seoul and lunched with Park, then head of the embattled conservative party. According to a Park aide present at the lunch, Xi expressed interest in Park’s father’s rural development project in the 1970s known as the Saemaul (New Village) movement. Xi had began his own career in the Communist Party in a remote, impoverished village of northwest China at the very time Park’s father was pushing a nationwide rural modernization campaign. And like Park’s father, Xi’s father was a major figure in Chinese politics—revolutionary hero of the 1930s, rising star in the 1950s, victim of Maoist radicalism in the 1960s, champion of Dengist pragmatism in the 1970s and ‘80s.

In 2013, dining in Zhongnanhai, Communist Party headquarters just west of the Forbidden City in downtown Beijing, Presidents Xi and Park, the princeling and the princess, could shared a common sense that their nation’s past and their family’s history were somehow fused into one.

A year later, Xi reciprocated Park’s visit with a two-day state visit to Seoul, reinforcing the close relationship with the South Korean leader. Media coverage tended to exaggerate the significance of Xi coming to Seoul over Pyongyang as a “snub” of Kim Jong Un—after all, the key factor was that Kim had not raced off to Beijing after taking over from his father in the way Park had after her election. No way in hell was Xi going to Pyongyang before the young North Korean leader came to Beijing. Nonetheless, it was true that the ties between Xi and Park looked that much closer given Kim’s studied distance from China and Xi’s palpable annoyance at Kim’s behavior.

During his brief stay in Korea, Xi tried to match Park’s performance in China and tap into broader public sentiment with a speech at Seoul National University (watch the whole thing, with dubbed English translation, via the related link). Unlike Park, however, Xi could do no more with the Korean language than butcher the phrase for ‘Good afternoon”. And his litany of classical allusions to symbolize the close ties between “lips and teeth” came off as overdone. Most damaging of all was the gaping hole in Xi’s selective historical narrative of Sino-Korean relations. Addressing the students, reporters, and luminaries assembled in the crowded hall, Xi began his speech, like us in Week One, with the Black Dragon War, stressing Ming-Joseon cooperation:

“In history, whenever facing calamities and foreign invasions, Chinese and Korea people helped and comforted each other when in trouble. More than 400 years ago, the Japanese invaded the Korean Peninsula, the peoples from our two countries had the same enemy and same hatred and fought side by side. Both General Deng Zilong of the Ming Dynasty and General Yi Sun-shin of the Choson Dynasty died at their posts at the Battle of Noryang. Today there are still descendents of the commander of the Ming army, Chen Lin, in South Korea.”

So far so good. Next, President Xi jumped to the Sino-Japanese War and Anti-Japanese War—our week three.

“In the first half of the last century, Japanese militarism waged barbaric wars of aggression against China and Korea. It annexed the Korean Peninsula and invaded and occupied half of China, plunging Chinese and Korean people into misery and suffering, and breaking up the two countries.”

But next, after brief mention of the Korean provisional government in Shanghai and Korea Restoration Army in Xi’an, Xi leapfrogged right over the Korean War, as if our week four never happened, as if the PRC and ROK were not once enemy combatants on the battlefield. In Xi’s speech, everything from 1945 to 1991 is a void, an awkward silence. “Since establishing ties in 1992…” he continues drolly.

For President Park, Xi’s visit to Seoul was a diplomatic triumph, and South Koreans generally approved her moves to strengthen ties to Beijing. But President Xi’s attempt to rewrite Sino-Korean history by leaving out the hardest chapter to write flopped.