This content is taken from the University of Birmingham's online course, Metabolomics: Understanding Metabolism in the 21st Century. Join the course to learn more.
View course 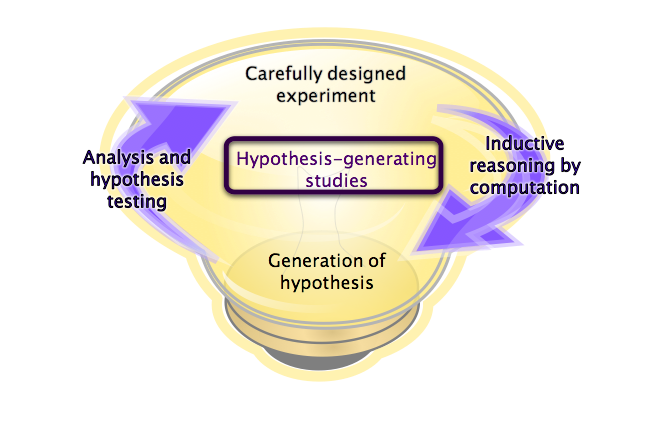 The cycle of knowledge

There are three analytical chemistry strategies applied in metabolomics – untargeted, semi-targeted and targeted.

The objectives of a study define which of the three analytical strategies are applied.

Sample preparation in untargeted studies typically involves the extraction of the metabolites from the biological sample in to a suitable solvent for the analytical analysis. The extracted sample is analysed by an appropriate analytical method (for example, reversed phase liquid chromatography mass spectrometry). The peak area of each metabolite (determined in the liquid chromatography mass spectrometry analysis) is used as the parameter in the statistical analysis to define the concentration differences between the different biological samples being measured. This is referred to as relative quantification as there is no comparison to calibration curves constructed with chemical standards. The use of calibration curves is required for full quantification. The biological importance of each metabolite is determined during data analysis and metabolite identification, and biological interpretation is performed at the end of the experimental pipeline. The chemical identity of each metabolite in the study is not known at the start of the study. Data acquired during the data acquisition is applied to identify metabolites after data acquisition.

Currently, one of the major limitations in untargeted approaches is the identification of metabolites. It may not be possible to identify the metabolites highlighted in the statistical analysis as significantly changing between the biological classes in the study. Metabolite identification is currently one of the hot topics in metabolomics.

The sample preparation in targeted studies applies methods that can be optimised to retain the metabolites of interest and to remove other biological species and analytical artefacts which are not carried through to the downstream analysis. The analysis of the data and interpretation of biological significance is much simpler in targeted studies.