In “The Visual Display of Quantitative Data,” Edward Tufte called for improved visualization and graphic integrity. In “Visually-Weighted Regression,” Solomon Hsiang presents a specific tool researchers can use to improve transparency in their graphics. In “Let’s Practice What We Preach: Turning Tables into Graphs,” Andrew Gelman, Cristian Pasarica, and Rahul Dodhia discuss how to turn large tables into more visually compelling graphics.

Hsiang points out two major issues in data interpretation that can be addressed by improved visualization. First, readers with insufficient statistical training often overlook statistical uncertainty and instead focus on point-estimates or statistical significance, which “are particularly vulnerable to misinterpretation since sampling error can introduce large but statistically irrelevant structures in a regression.” Second, edge effects, or “when data becomes sparse near the edge of the data’s support” present another significant problem because they “distract readers from the central region of the support, where the quality of estimates and inference is actually higher.”

In response to this, Hsiang proposes a method of intuitively communicating to readers what parts of a regression are uninformative due to imprecise data. He also calls for readers to pay more attention to regions of a graph where there is the most informational content.

The most widely used approach to addressing these issues of misinterpretation is to present precise quantitative information by plotting confidence intervals or standard errors using curves, shading, or error bars. Unfortunately, Hsiang argues, these practices actually have an opposite effect on readers, directing them to focus more on uncertain regions with more colors and attention grabbing lineage, than on the more certain regions. See the difference between figure 2A and 2B below. 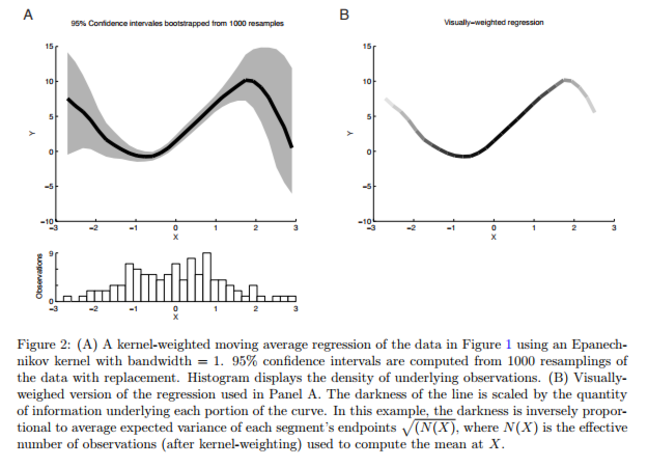 This phenomenon is defined as visual weight – “the amount of a viewer’s attention that a graphical object or display region attracts, based on its visual properties.” Unsurprisingly, the larger, interestingly shaped, colored, high contrast visuals in a graph grab the most attention. Hsiang says,

“The primary goal of visually-weighting a regression display is to align readers’ level of attention and feelings of certainty with actual statistical confidence, [allowing] for observational density and confidence to be displayed without needing to introduce additional graphical elements that clutter graphics and confuse readers.”

To combat this, Hsiang proposes that “graphical ink and contrast [be] removed when results become more uncertain” so readers can pay more attention to the regions containing more valuable information. See Figure 4 from Hsiang’s article below. 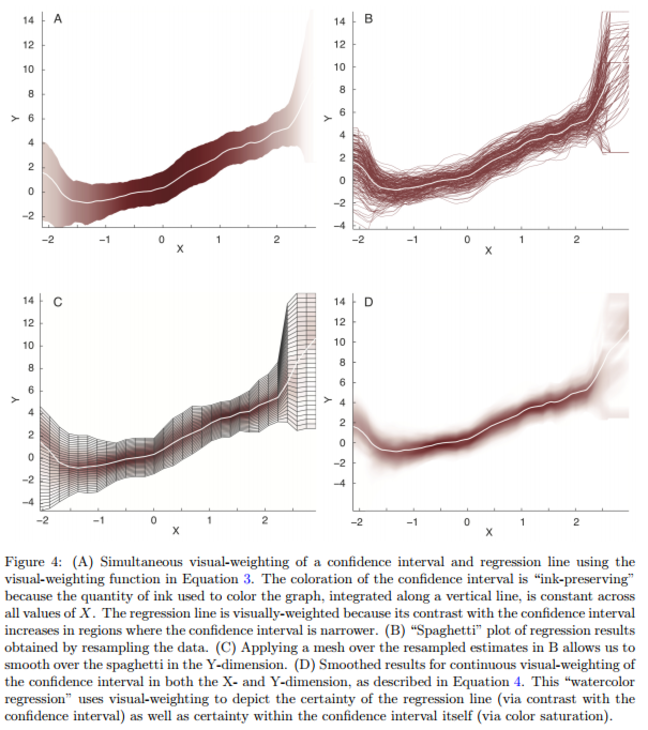 Similarly, Gelman, Pascarica, and Dodhia acknowledge the effectiveness of a good graph and examine an issue of Journal of the American Statistical Association (JASA) to consider the motivation of tables, as well as consider how they could be made into graphs. They believe well-designed graphs are superior to tables and offer suggestions about the placement of graphs, use of labels, and more, specifically considering multiple repeated line plots.

Tables, however, are not completely useless. Gelman and his colleagues believe they are effective for reading off exact numbers. In a statistical paper, however, readers are often more interested in comparisons. This focus on comparisons is the framework for statistical graphics.

The authors’ main goal is to show that graphs, while “requiring a greater initial investment effort,” can display all numerical data. And once understood, these graphs can be utilized to show comparisons that tables cannot.

Do you agree with the approach of altering a graphs visual aspects to enhance understanding? Have you experienced the effects of visual weight before?

Read the article by Gelman, Pasarica, and Dodhia.