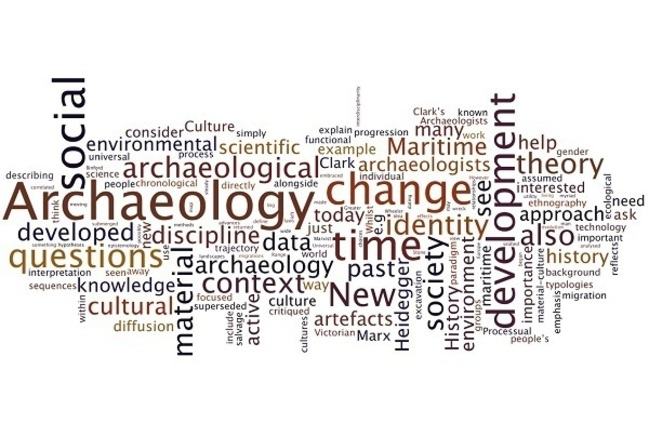 To help us understand why Maritime Archaeology is more than just the salvage of artefacts from the seabed we need to consider what questions we are interested in and what we can learn about the past from the material.

Knowledge of archaeological theory and epistemology – the theory of knowledge itself – can provide us with a way to help us think through our work. It can help us to define what we consider to be data, the questions that we can ask and how the data can be analysed and interpreted.

If we briefly plot the development of archaeological thinking we can see a move away from the pure salvage or artefact recovery of the Victorian Antiquarian era. During this time artefacts were collected as curiosities and grouped together in series of typologies. These typologies reflected Victorian attitudes regarding the evolution of man from the Stone, Bronze and Iron Age.

This progression was challenged as WW1 shook people’s perceptions of the world. Narratives of the past reflecting steady, progressive development were replaced by those that embraced the idea of cultural change and the importance of Nationalism and cultural identity. The Cultural History approach linked artefacts directly to groups of people, or, cultures. It focused on the chronological sequences of these people/things. As such, the development of new technologies, artefacts or ways of life in the past were assumed to be linked to the arrival of different groups of people and the culture they bought with them. Suddenly, archaeologists began to focus upon what caused ‘change’ and they did this by drawing on their own experience. Explanations of cultural change seen in the archaeology were taken to reflect invasion, population migration and Revolution. The language used by archaeologists such as V. Gordon Childe reflects an engagement with Marxist theories, and the social, political and economic institutions of the time.

Alongside the development of Culture History theory, archaeology saw the beginning of more formalised excavation methodology by the forefathers of modern excavation, such as Sir Mortimer Wheeler. As material artefacts became important, not just for curiosity’s sake, but as data for the creation of chronological sequences to map change over time, the need for precision increased. This recognition of the importance of rigorous archaeological methodology is something that continues to this day. However, the school of Culture History was superseded due to a growing awareness that cultural change could take place within a community rather than always being the result of an external influence. There was also a shift away from thinking about ‘cultures’ towards thinking about ‘people’.

Culture History focused primarily on social histories; however the importance of the environmental context in which cultural remains were found was brought to the fore in the 1950s with Grahame Clark’s Prehistoric Europe *. Clark identified the need to study environmental change and how it affected people’s lives and technologies. In so doing, Clark forged the way for the many interdisciplinary approaches to archaeology that we see today and that are crucial to maritime archaeology. By introducing questions about the changing natural environment, Clark also began to question and explain social change rather than simply describing it. Clark’s student Eric Higgs, developed this ecological approach in terms of Palaeoeconomy (ancient land-use, ecology and economy) and Site Catchment Analysis in the 1970s. Elements of an ecological approach are still important today, but without consideration of social factors that can influence choice it was critiqued as being ‘environmentally deterministic’. This was because it seemed to suggest that all human choice, technological development and activity in the past, were directly related to the environment. People in the past did not always make rational, functional decisions based on their environment, they also made choices about how to live based on social needs and it was important for archaeological interpretations to recognize this.

These new ecological considerations alongside the advent of C-14 dating led to the development of a New Archaeological paradigm known as Processual Archaeology. Drawing on new scientific methods and interdisciplinarity, New Archaeologists such as Lewis Binford concentrated on moving away from simply describing cultural change towards trying to explain it as a process. Archaeology drew on the Sciences to look at relationships between technology, economy and the environment. As with all science experiments, they created hypotheses based on models (in this case systems of social organisation) and tested them with their archaeological data, sampling and statistics (e.g. the work by Kent Flannery).

Whilst New Archaeology has now been superseded by the New, New Archaeology, known as Post-Processual Archaeology many of the methods we use today were developed within its scientific grounding. These tools include scientific developments in dating, excavation and analysis, as well as significant advances in conservation techniques. The development of Ethnoarchaeology was also important. This combines ethnography and anthropology with archaeology to make comparisons about the way people live and have lived around the world, and to search for universal links to help us understand the archaeological data and how people lived in the past.

Much of the development of the scope and process of Maritime Archaeology that we see today also developed at this time. Examples of this include the use of maritime ethnography, the scientific emphasis on site formation processes and environmental context (Muckelroy 1978) and the interest in the wider ‘system’ behind wreck finds (such as the Gelidonya excavated by Bass).

The Post Processual critique of New Archaeology balanced out its scientific bias by reintroducing a more historical approach and critically engaging with material culture as an ‘active constituent of society’ (e.g. Ian Hodder). We can see for example that material culture can be meaningful and symbolic (for example the ‘Ship as Symbol’ and the Vasa is a great example) and that the past may have many voices. As such the archaeological record can also have many interpretations. This Relativist approach directly opposed that of New Archaeology, which searched for a Universal. Post Processualists stressed the importance of the interpreter’s effect upon interpretation. As we can see from the trajectory of the discipline, as archaeologists we are tethered to our own societal background and experience and this affects the way we think, what we consider important and what we do. It is not surprising that in today’s world where we are anxious about questions of climate change and sea-levels rising, we are particularly interested again in the relationship between past societies and the environment and we are also interested in submerged prehistoric landscapes and coastal change; nor is it surprising that big questions about equality, gender or migration have returned to archaeological discussion.

As Maritime Archaeologists, we are not only guided by the material that we find, but also by our personal history and that of the development of the discipline. We are no longer purely Antiquarians, salvaging curiosities from the sea-bed, but as archaeologists we engage with the past in a multitude of ways to help us ask questions about technology, social and environmental change, from the society down to the individual, from sweeping migrations to the embodiment of daily practice: the myriad of maritime culture and what it is to be human.

This step is labelled as [Advanced] as you may find it more challenging than other steps in the course. We acknowledge that there are learners from a wide range of backgrounds and education levels on this course. You will not be tested on the information included in this step.

*This is a sample from Grahame Clark and his legacy that is freely available. The full text can be purchased, or you may be able to obtain it from a library if you are interested in it.