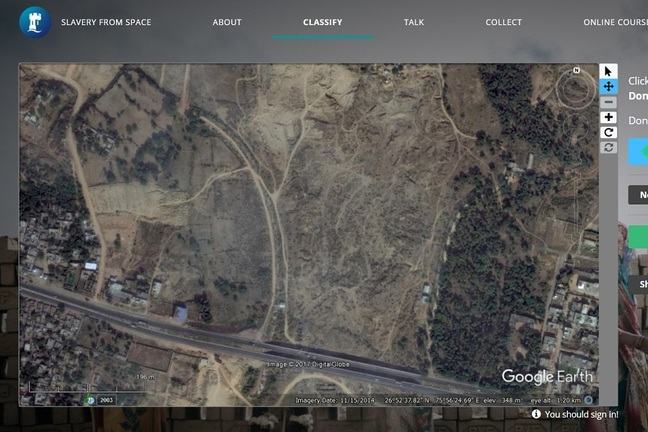 Researchers and charities are starting to use satellite imagery to map human rights violations around the world. Here at the University of Nottingham, we are mapping sites of slavery from space. Join us now in a specially-designed mapping exercise to map slavery in India from space for the first time!

This project Slavery from Space allows you to assist us in and contribute to our mission to end slavery, through the mapping of potential sites of slavery. This will provide intelligence to those providing aid on the ground, and the policy and decision makers to understand the processes that enable slavery at a larger scale.

We need you to mark in the middle of every brick kiln you see in a satellite image. We are focusing on an area of Rajasthan in India where our experience tells us there is a lot of slavery in brick kilns. We need your help now to find their exact location. There are full instructions at the site.

Last year we also mapped sites of slavery in Bangladesh. Elsewhere, the American Association for the Advancement of Science’s Geospatial Technologies and Human Rights Project has worked to expand the applications of geospatial technologies to human rights. The Project has conducted numerous case studies around the world and documented a wide range of human rights violations. These projects demonstrate the utility of geospatial technologies to document many human rights issues of interest, by enabling: documentation of remote or dangerous locations where on‐the‐ground access is limited or prohibited; large area analysis to study phenomena across regions; historical analysis of past events using archival satellite imagery; and the establishment of timelines of events in critical situations. You can explore the Project’s case studies here at this link to its 2014 report. Although it has not yet tried to identify slavery sites, it has tracked sites of conflict and environmental damage - which are both predictors of slavery.

Another example is Amnesty International, which has used satellite images for human rights research and advocacy over the past few years. It has documented forced evictions and violations committed in the context of armed conflict, documented the effects of oil spills and gas flaring on communities in the Niger delta, and used imagery as a warning tool for conflict escalation in Aleppo, Syria. You can explore Amnesty’s Remote Sensing for Human Rights project at its map, and read its report here at the link on satellite evidence of political prison camps in North Korea, where prisoners work in conditions of slavery.

As well, the crowdsourcing project Tomnod teamed-up with the Walk Free Foundation in 2015 to track the location and number of boats used for fishing around Lake Volta. Ghana’s Lake Volta is a site of systemic contemporary slavery: children are forced to work as slaves in the area’s fishing industry. More than 20,000 children are forced into slavery on Lake Volta, the International Labour Organization estimates. The size of the lake, 3280 sq miles, makes it difficult to map from the ground and provide an exact figure of the number of child slaves. Tomnod’s crowd-sourced data allowed humanitarian groups in the region to target resources and action where they are needed most, freeing children from slavery and preventing more from entering into it. Using high-resolution satellite imagery, they engaged a global community of online volunteers to examine the imagery pixel by pixel. Thousands of volunteers contributed to the campaign in 2015 and 2016, identifying buildings, boats and fish cages. By searching DigitalGlobe satellite imagery of Lake Volta and placing a tag on every boat, building and fish cage they found, volunteers helped to create a valuable data set that will bring a better understanding of the slavery landscape in this area of the world. You can read more about this project and explore its interface.

After exploring these projects and participating in our own new Slavery from Space project, tell us in the comments what you think of this technology. Is it easy to use? What kinds of geographical areas and forms of slavery should researchers explore next with geospatial imagery?