Skip main navigation
Home How to get started in animation
Published on April 28th, 2022

Understand how to learn animation, how to get an animation job, and the best software for getting started as an animator. 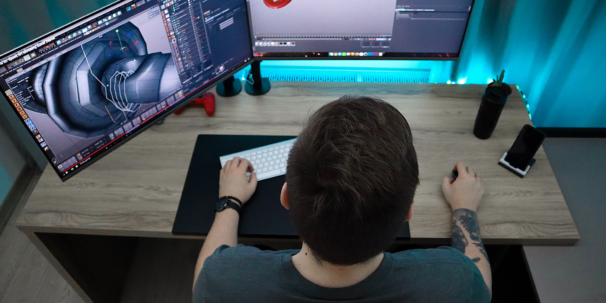 What does an animator do?

Animators are artists, but instead of using paintbrushes to convey their message, they use the movements of the characters we see on television and in games. The animator’s job is to bring characters to life using the script and the director’s vision. If they can do it effectively, the audience may forget they’re watching a collection of pixels rather than a genuine, breathing human.

Animators are acrobats, comedians, and actors. Their goal is to provide dynamic and engaging character portrayals for films, television shows, video games, and commercials.

To tell stories, 2D animators use a conventional hand-drawn approach or sophisticated computer tools. To bring characters to life on screen, they apply the fundamental principles of timing, space, and appeal.

3D animators use 3D animation software to perform many of the same tasks as 2D animators. 3D animators take advantage of technology in addition to the core principles of animation to push their art form to new heights. These animators will animate everything from trees to dinosaurs and heroes.

Game animators create animation for video games. They will tend to create a “library” of different animated actions rather than animating a feature from start to finish. Game cinematics are the exception to this.

How are animated films made?

Animation is a wide field with many sub-categories. We’ll start by taking a look at some of the behind-the-scenes processes that studios use to create animated movies.

Consider an animation studio as a machine with many moving parts. Departments, people, and projects are the parts, which work together to create visual tales. This machine’s assembly line (pipeline) can be divided into three sections:

The first step of a film’s production, which includes tasks such as script drafting, storyboarding, visual development, and more. It’s here that a lot of the story foundations are laid.

Character modelling, rigging, and animation are all included in this stage. This is usually the longest and most labour-intensive stage.

Compositing, visual effects, and colour correction are all part of the post-production process. This final step focuses on the finer points of the story, polishing it and preparing it for the audience.

The studio is a collaborative workplace. Employees and departments have their own areas of responsibility, yet a choice made in one area will have an impact on all subsequent teams. We’ll focus on the Animation element of the pipeline in this post, but it’ll help if you can understand the other aspects as well.

How is game animation different?

Like film animators, game animators take the work of 2D and 3D artists and bring it to life through animation. They develop character movements based on the director’s plan. They bring authenticity, personality and emotion to the game.

Unlike film animators, however, game animators tend to be adept at coding and programming. They construct movement libraries for each character, as game animation is typically a complex blend of various types of movement. They work in a way that maximises gameplay and interaction while also maximising the technology of the game engine.

Game animators collaborate closely with artists and programmers. They usually answer to the art director.

How can I get a job in animation?

Keeping a watch on job advertisements is the best way to learn about specific requirements for various types of animation jobs. Most will go into considerable detail about the skills needed, including any particular training or expertise that may be required.

Animation job postings can be found in a variety of places, though you’re more likely to find them on the studio’s own website or Twitter feed than on conventional job listing sites.

To work as a professional animator, you do not need a college or university degree. Degrees aren’t important to feature film, television and game studios; what matters is your skillset. Do you understand body mechanics? Are you able to portray a variety of emotions and scenes?

You demonstrate your abilities by creating a demo reel to show potential companies. A demo reel is a collection of short clips (30-90 seconds) that highlight your best animation work. Studios will often specify how long they want your showreel to be.

What tools do I need for animation?

What follows is a list of the best software for animation, with different options for a range of budgets and requirements.

How do I learn animation skills?

Below, we’ve outlined some top tips for honing your skills:

With this online course in animation from the internationally acclaimed National Film and Television School (NFTS), you can become an expert animator and master various animation methods. Our team of award-winning animators will deconstruct their own animation process and explain how they tell stories through the medium of animation.

Take your initial steps into the fascinating realm of stop motion animation, which has been used in films like Wallace and Gromit, Coraline, and Isle of Dogs. A virtual visit to Aardman Animations’ studio, followed by a viewing of a short stop motion film, will provide an introduction to stop motion methods.

Your next topic will be cel animation, which is another term for 2D animation. Different cel animation techniques will be covered, as well as character creation and sequence construction. You’ll have the chance to brush up on your drawing abilities and hear from animators at Collingwood & Co studio.

Another technique you’ll learn about in this animation course is pixelation. The method entails shooting and editing actual people’s movements to make them look to move like manufactured animations.

In your final week, you’ll dive into the world of 3D animation and CGI, where you’ll study CGI techniques and 3D fundamentals. You’ll talk about how to make a character’s 3D surroundings and how to think about 3D space in animation. After that, you’ll reflect on the possible future of the animation industry.

You’ll learn about animation careers and hear about graduation projects from NFTS animation directors at the end of the course.

This workshop is for anyone interested in animation or learning animation techniques. No prior animation experience or equipment is required.

You’ll design and animate numerous 3D models as you advance through the course, such as a bouncing ball and a rudimentary figure. This will prepare you for advancement to the next level of the course.

For your final project, you’ll let your creativity run wild by designing your own 3D setting complete with full character models that you can animate to bring your work to life.

You don’t need any prior animation experience as the course will walk you through the entire process. You’ll need a computer that can run Blender, such as a laptop or desktop.

This interactive course will provide you with an introduction to programming and teach you how to use the Unity game engine to build and programme your own games. The skills you’ll gain on this course will be extremely useful in launching a career in programming and game creation.

This course will walk you through the fundamentals of programming, including the basic data types used by all programming languages and how computers read and process instructions written in code.

After that, you’ll learn how to construct and use variables in your code, as well as methods for simplifying complex problems, which will make any future programming go much more smoothly, even if you run into coding difficulties.

You’ll gain a rudimentary understanding of C#, Unity’s main programming language. Then, to put it into practice, you’ll learn how to turn your ideas into games using the Unity game engine.

Once you’ve mastered the fundamentals, it’s time to put your new abilities and knowledge to the test. You’ll begin by learning how to construct simple text-based games before progressing to a simple but fun 2D game.

By learning how to create your own game mechanics, sound effects, and even full models and animations, you can flex your imagination and inject your personality into your game. To get the most out of this course, you don’t need any prior knowledge or expertise with C# programming or the Unity game engine.

Whether you’re most interested in 3D, 2D or games animation, animation is an exciting and varied field. Combining acting, artistic and computer skills, it’s a multidisciplinary role that can serve as a springboard to a career in the film, television, advertising or games industries, as well as many other creative careers.