Different forms of violence and peace

Professor Johan Galtung talks about direct, structural and cultural violence.
View transcript
3.3
I’ve been working with three concepts. One is the direct violence, which has an actor who intends hurt and harm. It’s intended. It’s very important. And it’s usually short and quick, and sometimes lethal, sometimes not, but it is intended. Then you have the structural violence, which is the social structure and grinding of suffering, like the capitalist system does. Like is done by authoritarian regimes, and it hits people at the most vulnerable points. And those vulnerable points are called basic needs. So they can hit the wellness, health. So you have misery at the bottom of society. People die to the tune of 125,000 a day without anybody firing a bullet.
59.8
They die of hunger, and they die of the diseases that are totally preventable and curable. But they don’t have the money to do anything about it. So the structure is made in such a way that they’re just the helpless victims of it. Or politically, they’re deprived of freedom. And since they are set on the monochromatic, so to speak, track with no choices, they become much less than they could be. Or their identity is taken away from them, and they’re given another identity, like let us say the 800,000 Hawaiians in Hawaii when a white man came. And so many of the children were shipped off to the mainland to be taught English, Christianity, and baseball– becoming good Americans.
112.5
Now we can imagine that they landed between two chairs, neither accepted as Hawaiians nor as Americans. The structural violence is not intended, but it’s caused by a very important concept, not the actual commission, but the act of omission. The condition for maintaining the structural violence is that nobody does anything about it, so we let it happen. And somebody would even say this is normal, this is what normal society is like. It isn’t. And here we in the Scandinavian countries, we had a lot of structural violence, but very simple measures. We were able to make the society less vertical or horizontal with health resources available, all of it.
159.7
And it made a lot of difference, in the sense, from a two-class society to a one-class society. Now the gap is opening again because the poor people of yesteryear have become middle class, and have no compassion with those who are suffering today. And the gap is opening again– the structural gap. They don’t intend to harm people, but they don’t do very much to prevent it either. And then the third type of violence, what I call cultural violence, which are the aspects of culture that legitimise one or the other or both of the other two. Social Darwinism, the type of Christianity that sees sickness as God’s punishment, been extremely important.
206.9
Nationalism to justify direct violence or US exceptionalism to somehow make Americans believe that they not only a right to start killing in Iraq, but even the duty to do so. So we have a triangle with three types of violence that feed into each other.

In the video above, Professor Johan Galtung defines direct, structural and cultural violence.

One way to understand violence is to categorise it into these three different forms (direct, structural and cultural). Another way is to assign different levels or hierarchies of violence by: 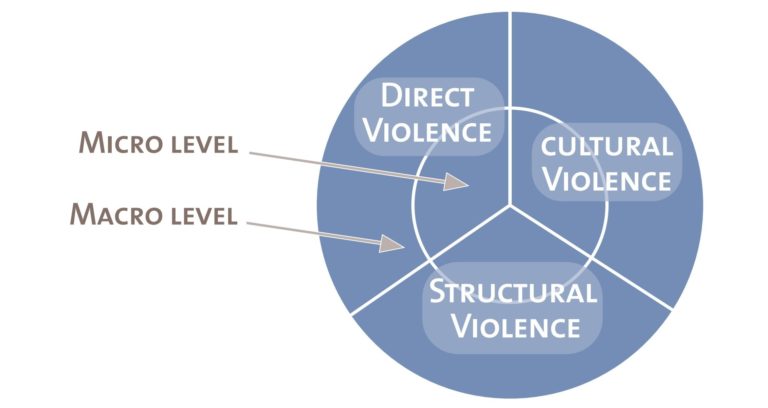 So far, we’ve looked at “negative peace” – peace as the negation (or absence) of violence. But it can be so much more. Let’s move on to consider “positive peace”.

2. Peace as a state of complete harmony

The World Health Organization defines health as not merely the absence of disease or infirmity, but as the complete state of physical, mental and social well being. In the same way, we can define peace not merely as the absence of violence, but as a positive state or condition of harmony. It is determined by loving, harmonious acts which elicit the good in each other (direct peace), by fair and horizontal relationships (structural peace), and by a culture of peace (cultural peace).

However, what happens when we are faced with conflict? This second definition of peace doesn’t necessarily help us address conflict – it is more an aspiration and guiding star. Hence, we need a third definition, because peace is not only a state of harmony, it is a dynamic, changing concept – just like health. If we talk about someone with “good health” we often mean that this person has a strong immune system, and can recover quickly when disease strikes. Health can be seen as a capacity of the body, mind and spirit to deal with life challenges in a positive way.

3. Peace as the capacity to handle conflict

Similarly, Professor Galtung defines peace as the capacity to handle conflicts with empathy, creativity and through non-violent means.

But what do we mean by “conflict”? In peace science, conflict is seen as a clash of incompatible goals in a goal-seeking system. It is important to understand that conflict is a neutral term – conflict is not inherently “bad” or “good”. Rather, conflict is a natural, normal part of life. Conflict has always existed whenever humans have engaged in societies and engaged with the world around them. In fact, conflict has the potential for positive change – it’s just that we often focus on the negative aspects of conflict.

A conflict becomes negative when we try to resolve it by turning to violence. Therefore, it doesn’t make sense to talk about conflict prevention – what we need is violence prevention.

The “ABC triangle of conflict” below illustrates that conflict is determined not only by the content or contradiction (that is, what the conflict is about), but also by the attitude and and subsequent behaviour of the people involved in the conflict.

What is peace work?

Peace workers can try to modify any of the three corners of this triangle (attitude, behaviour, and content/contradiction). They can try to increase “negative peace” (by simply preventing, reducing, or stopping violence), increase “positive peace” (by promoting direct, structural, and cultural peace), and transform conflicts in a non-violent way.

We’ve now gone through some basic concepts of medical peace work. Do you think it is relevant for health professionals to learn about peace work? Why/why not?