Read this article to discover which viruses infect both animals and humans. Discover that viruses may be ingested with meat and with shellfish. 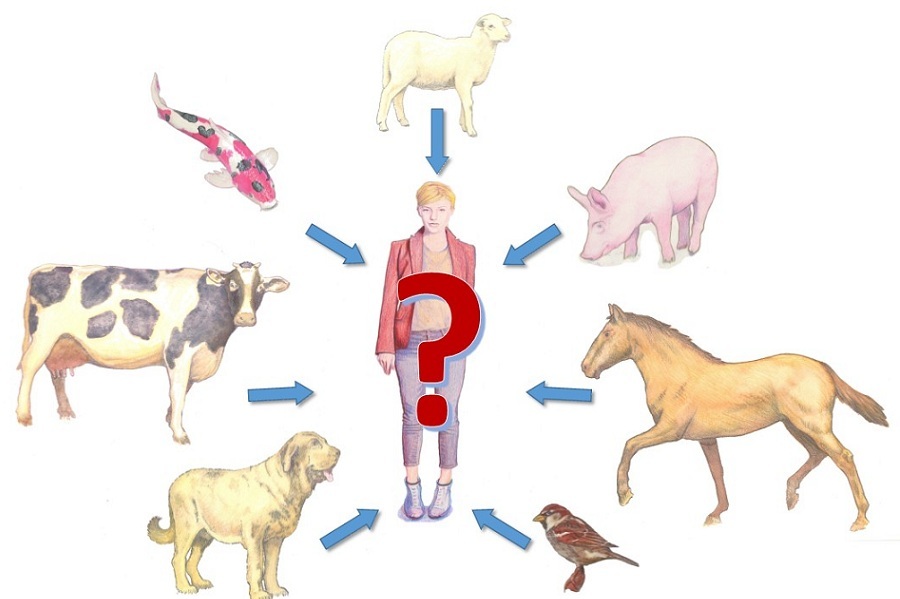 They are usually transmitted via the faecal-oral route and primarily infect and replicate in the gastrointestinal tract of the host. Enteric viruses are shed in extremely high numbers in the faeces of infected individuals, typically between 105 and 1,011 virus particles per gram of stool. They can be transmitted by food, water, fomites, and human contact. In addition to causing acute diseases, they are of public health concern due to their low infectious dose. For example, the probability of infection from exposure to one rotavirus is 31%, and no more than 1 PFU (plate forming unit, more or less equivalent to one virus) is required to cause infection in 1% of healthy adults with no antibody to the virus.

The enteric viral pathogens found in human faeces include noroviruses (previously known as Norwalk-like viruses), enteroviruses, adenoviruses, hepatitis A virus (HAV), hepatitis E virus (HEV), rotaviruses, and astroviruses, most of which have been associated with food-borne disease outbreaks. Most viruses causing food-borne disease are of human origin. A key question still to be answered is whether animal viruses can infect humans and vice versa.

The pathogenic strains of astrovirus, adenovirus, and enterovirus that infect animals appear to be distinct from those that infect humans, and so far they have not been implicated in human disease. Zoonotic infections are generally not transmitted by food. However, the risk of zoonotic viral disease from meat products contaminated with animal viruses has been identified in some countries, involving almost exclusively hepatitis E virus (HEV), the first virus reported to cause zoonotic food-borne viral disease (Tei et al., 2003). Non-viral infectious proteinaceous agents, or prions, that cause diseases such as bovine spongiform encephalopathy (BSE) or “mad cow disease”, scrapie, and Creutzfeldt-Jakob disease, also transmit disease from animals to humans via the food-borne route – however, we will not discuss these this week.

Another possibility for viral food-borne infections is that animals, such as shellfish, are contaminated with viruses. Because shellfish are filter feeders, the concentration of viruses accumulated in their edible tissues may be much higher than that in the surrounding water. Consumption of shellfish harvested from enteric virus-contaminated waters often has led to human outbreaks of viral diseases, such as hepatitis A.

Possibly you were wondering whether animal enteric viruses could infect people. From the article above, you can see that the possibilities are remote, but present. Find out whether any of the viruses mentioned in the article have produced enteric illness in your country and the animals that have been involved, and share it with the other learners.