Overview of the mechanisms of AMR

Antibiotics are ‘magic bullets’ with the aim of targeting parts of the bacterial physiology that are not present in eukaryotic cells. This minimises damage to the host. 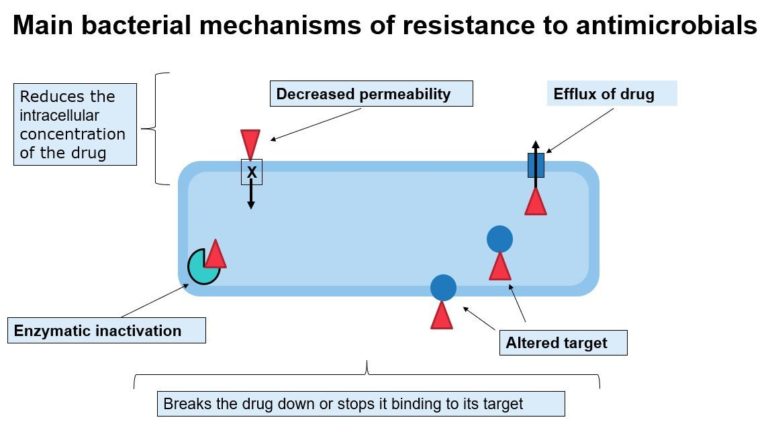 Antimicrobial resistance can be intrinsic or acquired by bacteria.

Intrinsic AMR represents an inherent or natural trait found in some bacteria that makes antibiotics ineffective against them. For example, the Mycoplasma species, which cause a range of infections in different animal species, lack a cell wall. The β-lactam family of drugs target the bacterial cell wall and therefore, would not have any effect on Mycoplasma species. A further example is innate production of enzymes that can inactivate a drug, such as Klebsiella species and ampicillin resistance.

Other key examples include:

AMR can be acquired via mutation(s) or by acquiring new genetic material. AMR acquired through mutation can not, however, be passed between bacteria, but only via replication to new generations of that bacteria. Of more concern is resistance acquired via a mobile genetic element (e.g. plasmids), as in this case multiple antibiotic resistance genes maybe present on the same element, rendering the bacteria resistant to multiple classes of drug.

AMR may arise from mutation(s) in a gene which:

AMR does not usually develop in vivo in the pathogen during treatment of infection, with the main exceptions to this being with the fluoroquinolone class of drugs and rifampicin.

Where bacteria are present in high numbers, mutations can arise spontaneously and then such bacteria are selected for within that population under antibiotic selective pressure.
The mutant prevention concentration (MPC) is the lowest concentration of drug required to stop the growth of the least susceptible bacterial cell within a high density bacterial population.

For an interesting case study on Campylobacter species, fluoroquinolone resistance and poultry, please see the document in the see also section below.

Some bacteria are able to produce biofilms, either alone or with other microorganisms. Biofilms are microbial communities which attach to abiotic (e.g. indwelling devices) and biotic surfaces (e.g. wound tissues) and which can be protected by a polymer layer. When present, biofilms can increase the concentration of antibiotics required to kill or stop bacteria growing:

If you have any questions on this content, please feel free to ask them in the comments section below.

In the next step, we will look at why AMR has emerged and how it can be transmitted, both between animals and between bacteria.