How much DNA is too much DNA?

In this Step we will cover some of the common terminology used to describe large genomes.
© Wellcome Genome Campus Advanced Courses and Scientific Conferences

In this Step we will cover some of the common terminology used to describe large genomes.

DNA content varies dramatically from one organism to the next. For example, although viruses have some of the smallest genomes of only a few thousand letters (Hepatitis B virus has about 3,000 bp (base pairs)) a Japanese flower plant called Paris japonica has the largest genome ever sequenced with 150 billion (150,000,000,000 !!!!) bp.

In the graph below we can see the relationship between number of genes and genome size in viruses, bacteria (prokaryotes) and eukaryotes. 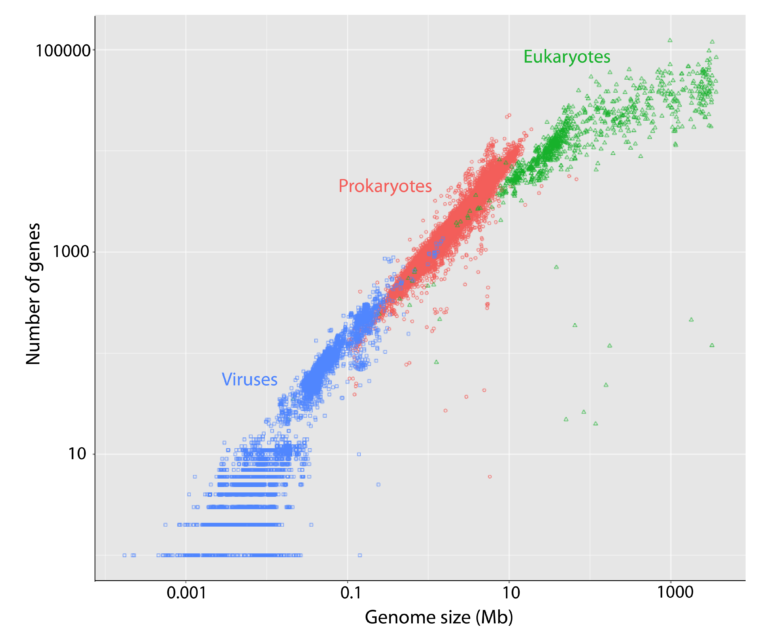 As genomes get larger and larger, it becomes impractical to denominate them by the thousand, so the community has adopted the following abbreviations:

Therefore, a viral genome of 3,000 bases can be expressed as a 3 kb genome.

Acknowledgement: “Genome size vs number of genes.svg” by Francesca Short. Reproduced from Estevezj is licensed under Attribution-Share Alike 3.0 Unported. This plot can be made from scratch. R code is included in the linked page.