The Effect of Private Security on Crime

This article discusses the role of private protection in stopping crime, and asks whether businesses that employ private security have less crime.
© Songman Kang, Hanyang University
You may have the impression that it is mainly the government’s job to fight crime. After all, governments spend a lot of taxpayers’ money to hire police officers, prosecutors, judges, prison guards and parole officers. Why can’t we just leave it to our governments to make sure that our neighborhoods remain safe?However, knowingly or unknowingly, we all take precautionary measures to protect ourselves from crime, and these private protection measures have important effects on overall crime rates. For example, the number of security guards in the U.S. (1.1 million) is already more than 20 percent larger than the number of police officers (0.9 million). Thousands of houses are equipped with automated burglar alarms, and most cars sold on the market today come with sophisticated anti-theft technology.

Suppose you are a researcher interested in the effect of private security guards on crime. To be more specific, let’s say you are interested in knowing whether hiring more security guards lowers the risk of crime victimization for business owners.One simple analysis would be to collect data on the number of security guards used by different businesses and the number of crime victimization they experienced. And we will run a regression analysis to see how the level of victimization is related to the number of security guards.However, such analysis is unlikely to give us the causal effect of security guards on crime because of the selection problem: Businesses that hire more security guards may be systematically different from others with fewer security guards in terms of other crime-relevant characteristics (e.g., presence of more valuables, high-crime location, business owner’s risk-averseness). We can try to include some of the observable differences in the regression, but no matter how hard we try, some of the key characteristics we want to include will not be available. (For example, where do we get the information on how security-concerned each business owner is?)As usual, we can strengthen our study design by taking the fixed-effect approach and focusing on the within-business variation in the level of security guards and crime victimization. If a business hires security guards to patrol previously unattended parking lots, the difference in crime rates in the parking lots before and after the change can be more plausibly viewed as the causal effect of the guards on crime. Studies based on this before-after analysis tend to suggest that security guards are particularly effective in reducing crime in some situations (for example, preventing car thefts in parking lots), but less so in others. (See the literature review by Brandon Welsh, Mark Mudge, and David Farrington for more information.)

View Course
When previously-unattended businesses, parking lots, schools, and city parks hire security guards, the change is usually accompanied by other safety-improving measures such as high-power lighting, fencing, and installation of surveillance cameras. Ironically, this makes it more difficult to separate the effect of security guards from the effects of other measures. However, this distinction may not be all that important. For many business owners, school principals, and city mayors who want to improve security in their businesses, schools, and city facilities, their primary concern will be whether a combination of private security measures (involving guards, improved lighting, fencing, etc.) lowers crime or not, not measuring the magnitude of the crime-reducing effect of each safety measures.Business improvement districts (BIDs) offer an interesting example here. BIDs are non-profit organizations created by property owners to improve various aspects of their business area. They collect additional “tax” from the members and use the fund to make their businesses safer, cleaner, and more attractive by hiring security guards, cleaning streets and actively promoting the area.Criminologists Philip Cook and John MacDonald analyzed the effect of BIDs in Los Angeles on local crime rates. Since neighborhoods that adopt BIDs may be systematically different from other neighborhoods, they use the fixed-effect approach, focusing on the within-neighborhood change in crime when a BID is newly set up in that neighborhood. They find that the introduction on a BID reduces, on average, the number of serious crimes by 11 percent, and conclude the social gains from the BID (in the form of fewer crimes and arrests) are about 20 times larger than the BID expenditures on private security measures. It seems that collective security efforts by private citizens and business owners can have large crime-reducing effects. 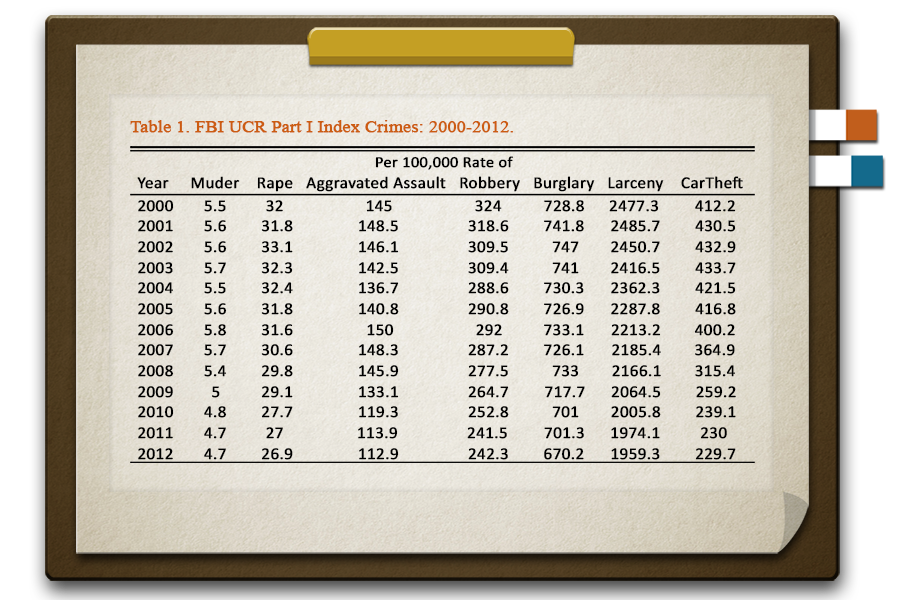 Why is it that motor vehicle thefts continued to fall during the 2000s, while most other index crimes remained relatively stable? One potential explanation is that anti-car-theft technology has improved so much during the 1990s and 2000s that it has become a lot more difficult to steal cars. For example, most cars sold on the market today come with an engine immobilizer, which allows the engine to start only when the correct key is present. Nearly 6 million car owners in the U.S. and Canada subscribe to the General Motors’ OnStar program, which can track the exact location of stolen vehicles, slow them down, and prevent their engines from re-starting. Some tech-savvy thieves may respond to such anti-theft devices by adopting even more advanced technology themselves, but many more “casual” car thieves must have been deterred by such improved car-theft prevention technology.A recent study by economists Jan van Ours and Ben Vollaard (2016) investigated the effect of the use of an engine immobilizer on car thefts in the Netherlands. They exploit the fact that a 1998 European Union regulation required all new cars in the Netherlands to be equipped with an engine mobilizer. Similar to the usual fixed-effect regression analysis we saw earlier, they focus on the within-model difference in the rate of thefts for cars produced before and after the regulation. (For example, what are the theft rates for Honda Civics produced in 1997 vs. 1999?) They find that the models produced after the regulation were 40 percent less likely to be stolen than those produced earlier, and that the regulation is responsible for 50 percent of the observed drop in car theft in the Netherlands between 1995 and 2008.

Hi there! We hope you're enjoying our article: The Effect of Private Security on Crime
This article is part of our course: Economics of Crime