Forward to a Robust Energy System

View Course
Finally, it is important to keep remembering that a shift towards a more sustainable energy system does not imply that the age of fossil fuels is over soon. More sustainable implies increasing the share of renewables and making the use of energy and fossil fuel more efficient. It will certainly take time before such an increase will even take over fossil fuels as the main energy resources. Despite ambitious policies in many world regions such as the European Union, policy agendas also discuss time frames of decades to even more. In addition, if the worlds energy consumption keeps increasing, even reducing the share of fossil fuel in the energy used does not necessarily mean a rapid decrease in absolute numbers of joules and watts needed from fossil fuel resources. That is: fossil fuels will remain crucial for at least quite a while. Hence, also the current energy system with its pipelines, wells, tankers, fuel stations, coal fired power plants and its multinationals, state companies, regulations and contracts will simply continue to exist and be needed. Adding more renewable resources to the energy system, therefore, will also demand matching with this existing system. The existing infrastructures and existing companies and governments are clearly also playing a key role there. They are also among the forces providing stability. Even when such stability would from an ideological perspective be criticized for protecting the ‘status quo’, the counterargument remains: we as a world society still need the system of energy production and distribution based on fossil fuels.Figure 6.1: Using heat and cold storage for buffering energy 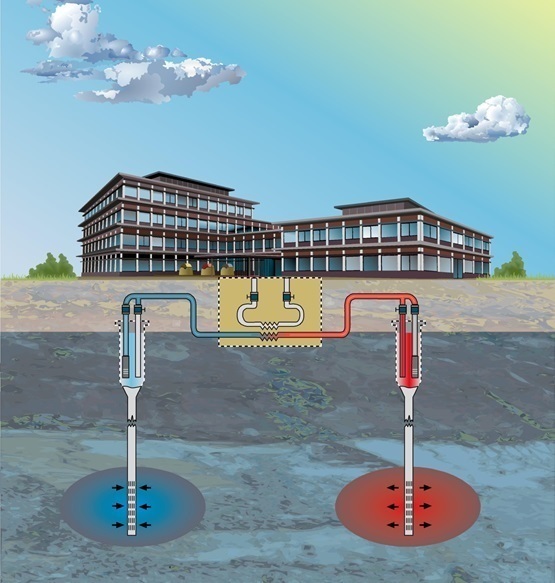 Source: www.provinciedrenthe.nlUpscaling and multiple scalesIn the face of the need to combine flexibility and robustness, a spatial perspective does offer some assistance. That is: the idea of using area-based conditions as an inspiration for developing and implementing renewable energy projects might also be helpful in combining flexibility and robustness. This can be viewed on different spatial scales.On the level of the energy initiative itself, the fact that the initiative is linked to a wider set of interests in the area contributes to the viability of the energy system. An area-based initiative is often based on overlapping interests, which gives the initiative a multi-functional purpose. For example, farmers use bio digesters to reduce their need to export manure, to generate heat, produce gas and produce humus (Muller 2009). Even if the profit from bio gas or heat reduces, the other benefits are sufficient enough to continue with the project. In an economic sense, this means that there is more capacity to adapt to market change. Furthermore, its linkages to other interests provide more funding options. For example, solar panels on the roof of a large distribution centre could be funded by the company itself, an energy company or even individual users. Moreover, the embedding of the initiative in the local economy gives trust and support. Local commitment may open up possibilities for extra investments in innovations, or for bridging difficult periods with regional support. Hence, a spreading of risk is achieved. From a societal perspective, local involvement will also stimulate learning about the costs and benefits of local energy production, allowing for more public support for innovation of the energy system. Moreover, the fact that energy initiatives emerge from local society allows for closer consideration of the physical impact of energy production on the landscape, enabling them to stay within perceptual boundaries of visual attractiveness. In fact, this may prevent the risk of NIMBYism (Wüstenhagen et al. 2007).On a regional scale, we find that initiatives can form robust networks together, which in turn contributes to robustness of the energy system. Robustness can be understood as resistance to change, brought about by circumstance and shock. For instance, a heat network can become robust when multiple sites with residual heat are connected to multiple housing areas with heat demand (Broersma et al. 2011). In that case, the exit of a single industry with heat supply will not lead to the collapse of the whole heat network. Another type of robust network can be achieved when several biomass streams are connected to one bioenergy plant, which makes it less dependent on one biomass supplier (Kooistra et al. 2011, Jenssen et al. 2012).On an inter-regional level, we argue that an area-based approach can stimulate local and regional diversification in energy systems. Local and regional diversification emerges from the fact that area-based energy initiatives draw on regional qualities for energy production. Initiatives make use of regional advantages, leading to a regional specialisation in energy production. Some regions or localities will be specialised in solar energy, others in wind power or geothermal heat, and others in energy from biomass, etc. This will lead to spatial diversification, which can be employed to stimulate the creation of a viable energy system on a higher level. Instead of a country relying strongly on only one source of renewables, spatial diversification spreads the risks between regions. This avoids path-dependency (Martin, Simmie 2008) and allows for the possibility to shift to a different technology (if local supply fails or is ineffective) because other areas and regions have used other technologies. This will make the overall system less vulnerable. It also makes it more robust by preventing the emergence of a mono-culture. For example, when the system is completely dependent on wind, a windless period puts high demands on installed energy storage capacity (Mitchell et al. 2005). If it is based on multiple sources of energy, these can compensate each other reducing the need for buffers.Figure 6.2: Differentiation of energy sources in Europe 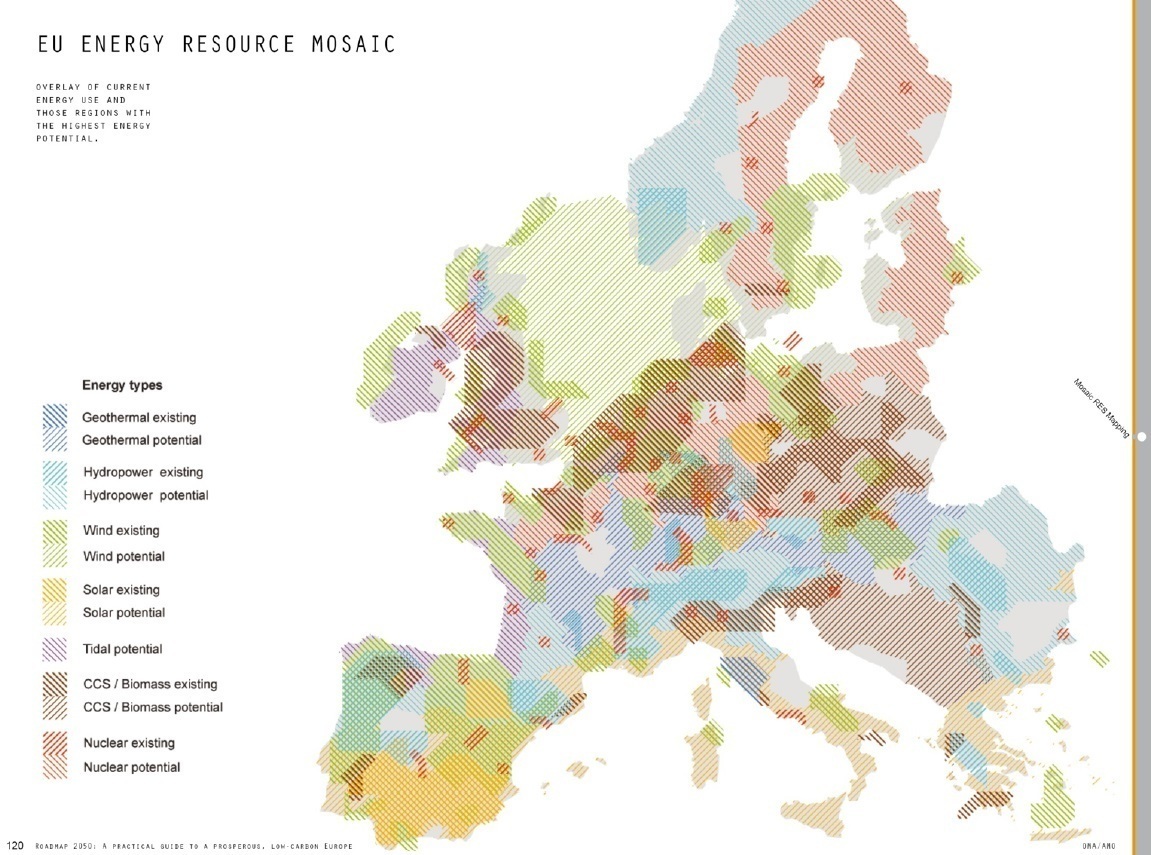 Source: Roadmap 2050 (by European Climate Foundation)Hybrid systems; concluding remarksIt should be evident: the answer for how we might create a new robust energy system that is sustainable does not exist. Rather, we are confronted as a world society with many questions, many stakes and many ambitions. There are new and attractive technologies available. There are new ideas and ambitions expressed. There are experiments and exciting successes. The desire to move to a more sustainable energy system, hence, is a real ambition, supported by many people and governments and that is currently starting to show results. Nevertheless, it is an uncertain process surrounded by many questions.The notion of transitions has helped us better understand why it is so uncertain and how we might – in a more abstract way – go about governing such a shift towards a more sustainable energy system. But we have also seen that ownership of this shift is fragmented, spread and seems impossible to fully identify, other than with the hardly useful answer that it is the ‘world society’ owning the problem. In the face of such a fragmentation, ‘who’ does the governing will not have clear cut answers. Rather, we face a hybrid network of (inter)national governments, multinationals, non-governmental organisations on the one hand, and many individual entrepreneurs, enthusiasts, skeptics and just many ordinary companies and people that are involved on the other hand. It is exactly in understanding that both groups are involved that a spatial perspective helps. After all: a spatial perspective shifts our focus to the places where actual changes occur. These are the places where changes become visible and where we see who is involved. We can see who gains and who loses, we can see which combinations between socio-economic activities are made or forgotten, we can see the changing landscape and we can see how the international networks of power grids, pipelines, contracts, regulations and money flows interact with people’s daily lives.What this week especially means to ensure is that you have also seen the vast spatial consequences of integrated renewable energy in the energy system. That these consequences urge us to be aware of how renewable energy sources link in with specific regional or local circumstances. But also, that you have understood the conditioning role of area-based conditions for altering energy systems and energy initiatives and, for influencing their likelihood for success or failure. That is, the idea is that you can now explain that there is not just an important spatial dimension to a shift towards a more sustainable energy system, but also that taking a spatial perspective can help us in supporting this shift. That is: that you can explain why the energy transition needs a place.
© University of Groningen

Hi there! We hope you're enjoying our article: Forward to a Robust Energy System
This article is part of our course: Solving the Energy Puzzle: A Multidisciplinary Approach to Energy Transition