This module introduces the governance of adaptation by describing the necessary conditions for governance, platforms for decision-making and actors. 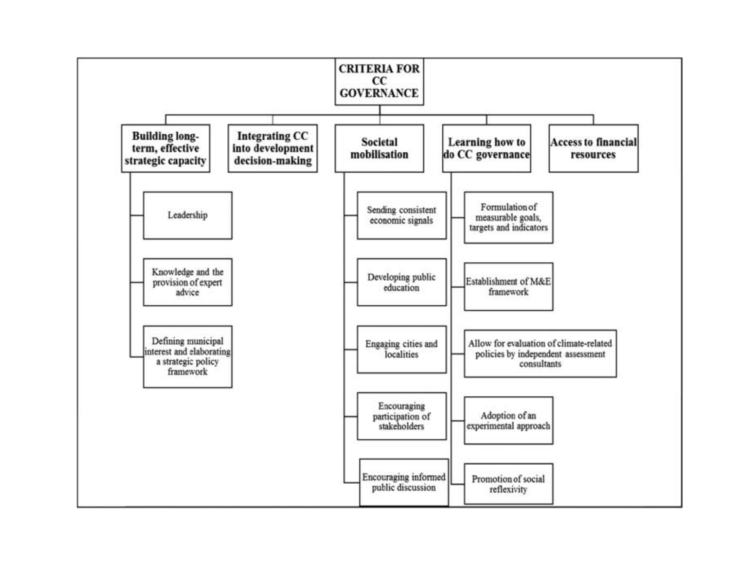 It is therefore important to know how and why these choices are made in practice, and how such choices affect the outcomes of efforts to govern adaptation. Adaptation requires positive adjustment and action, and coordination between actors, even if adaptation is also reactive to changing climate variability. Although much adaptation is likely to be very local and by private parties, coordination among households, organizations, and regions will also be needed to achieve collective objectives, such as flood protection, through adaptation. This means that adaptation requires platforms and mechanisms for decision making that involves all possible actors.

The feasibility of urban adaptation instruments depends on each city’s governance and financial capacities. Even if financial capacities are present, a number of other institutional obstacles can impede adaptation action. For example, many local governments are disinclined to support green infrastructure such as infiltration ponds, waterways and vegetated patches due the institutional organization around most used engineered infrastructure.

Even in cases where there is political support for adaptation planning, institutions may be ineffective in implementing the solutions. In this article you will learn about the need for urban adaptation governance and the financing challenges. You will also learn about the multi-level governance systems to support adaptation. Conditions for an adaptation enabling environment are also discussed briefly.

As noted before, adaptation governance has to be framed into the decision-making processes of urban governments, households, communities, and the private sector. Many aspects of adaptation can be implemented only through what urban governments do, encourage, allow, support, and control. This necessarily involves overlapping responsibilities and authority across other levels of government as well. Changing economic, infrastructure systems to more resilient systems should be considered as a mechanism for reducing risk and where maintaining existing systems does not reduce climate risk.

City governments that have developed adaptation policies recognize the value of an iterative process responsive to new information, analyses, or frameworks. In a range of cities, for example Durban in South Africa, it has proved useful to have a unit responsible for this within city government, drawing together relevant data, informing key politicians and civil servants, encouraging engagement by different sectors and departments, and consulting with key stakeholders.

The capacity of local authorities to work effectively, alone or with other levels, is constrained by limited funding and technical expertise, institutional mechanisms, and lack of information and leadership. Established development priorities and planning practices in functions like land-use and infrastructure provision may not be aligned with the goals of adaptation.

Many national governments face comparable constraints and still do not recognize the importance of local governments in adaptation. Local adaptive capacity can benefit from disaster risk reduction solutions that are not climate related. For example greening cities to reduce floods can have positive impacts on adapting to extreme weather events. New national legislation and institutions on disaster risk reduction have helped in some cases to strengthen and support local government capacity but as with other forms of adaptation, they require budgetary support and an increase in local professional capacities to be effective locally.

International organizations such as Local Governments for Sustainability International (ICLEI), UN-Habitat, and United Nations Development program (UNDP) have stepped in to support cities in developing adaptation and resilience strategies as a means to mobilize funding for adaptation response. A number of cities are starting to access funding from multilateral organizations including European Union through the United Nations Framework Convention for Climate Change (FCCC) and Cancun framework, African Development Bank and World Bank for adaptation funding.

A big challenge is that the process of concept development to project approval creates a time lag between the strategies, accessing funds and implementing the plans. The climate adaptation fund was created under the UNFCCC to offer a funding stream for adaptation in vulnerable countries and a fraction of these funds have supported urban adaptation, such as Dakar in Senegal, due to the First Direct Access project launched in Senegal. But adaptation action is also happening at local level and financed by individuals, private sector and community organizations for example in Bangladesh, communities are financing adaptation solutions on their own as shown in the figure below. 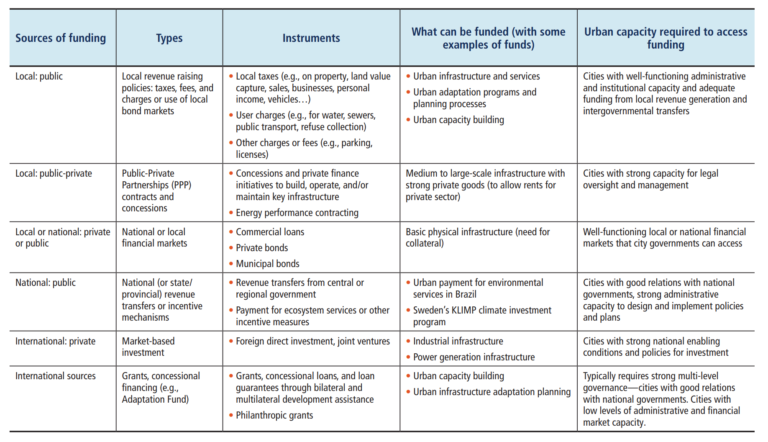 Preconditions for sound adaptation decision-making relate to principles of good urban government (what government does) and governance (how they work with other institutions and actors including the private sector and civil society). This would require all levels of governance where there is dialogue at each level and between the levels. for example, national dialogue would bring provincial, district and local administrative units but each lower level would also engage with all the actors to make decisions on adaptation.

Mainstreaming adaptation actions into plans may best be initiated by encouraging pilot projects and supporting experimentation by key sectors within local government. Assigning responsibility to specific departments can make the adaptation message easier to understand by local governments and other stakeholders and the associated responsibilities and actions clearer and simpler to identify and assign. Pilot projects and sectoral approaches ground adaptation in practical reality.

As actors in each sector in local governments come to understand their roles and responsibilities, the basis for integration and cross-sectoral coordination is formed. In a study of South African cities, Baudoin and Ziervogel (2017) analysed selected cities across seven criteria on adaptive capacity. The results showed that internal cities scored higher on criteria that involves external influence on adaptation planning than the internal adaptive capabilities. Adaptation decision making depends on participatory inclusiveness, equity, awareness raising, deliberation, argument, and persuasion—will determine the legitimacy and effectiveness of action. 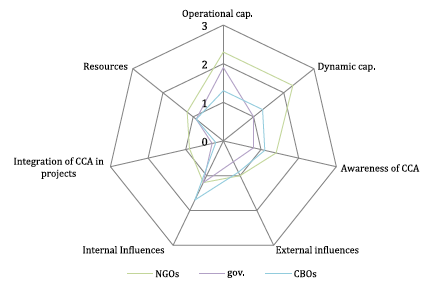 Additional reading: Cities and their growing populations are impacted by climate change on a daily basis. The need to accelerate adaptation in cities and to invest in solutions with multiple benefits is higher than ever before. It is for this reason that the first ever 10-year global program, 1000 Cities Adapt Now (1000 CAN), has been established to accelerate and scale climate adaptation in 1000 cities worldwide. If you would like to know more about urban adaptation governance, and specifically about the 1000 CAN program, you may access the following document: