How do bacteria destroy antibiotics?

Antimicrobial resistance (AMR) is resistance of a microorganism to an antimicrobial medicine to which it was previously sensitive. Resistant organisms (which include bacteria, viruses and some parasites) are able to withstand attack by antimicrobial medicines, such as antibiotics, antivirals, and antimalarials, so that standard treatments become ineffective and infections persist and may spread to others.

In this video Dr Rossana Rosa explains the two types of resistance.

Incorporated into this video is a section created by Prof Neil Woodford for the Antimicrobial Stewardship: Managing Antimicrobial Resistance course which explains the mechanisms by which bacteria become resistant.

You can download the slides for both sections of the video here and at the bottom of the step. 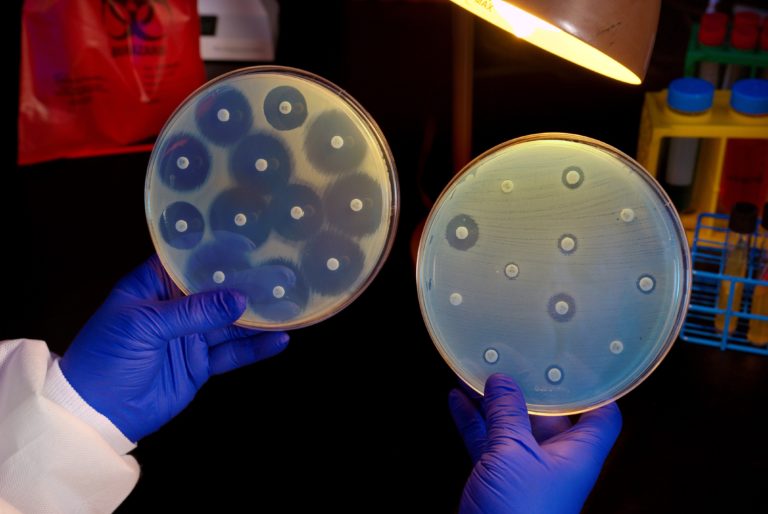 This image shows two petri dish culture plates growing bacteria in the presence of discs containing various antibiotics. The isolate, i.e. bacterial species, on the left plate is susceptible to the antibiotics on the discs, and is therefore unable to grow adjacent to the discs. The plate on the right was inoculated with a Carbapenem-Resistant Enterobacteriaceae (CRE) bacterium that proved to be resistant to all of the antibiotics tested, and is therefore able to grow near the discs.

You may also like to watch this video The Animation of Antimicrobial Resistance by Medicanon which also explains how bacteria become resistant to antimicrobial chemotherapy.