A Case Study on JetBlue’s Media Crisis in 2007

In this article, we take a detailed look at JetBlue's media crisis back in 2007.

A company that commences operations in the media capital of the world should recognize that great accomplishments and spectacular failures will be fully covered and shared with public—particularly the latter.

JetBlue leadership knew that basing an airline in New York City would mean great performance would be rewarded with great media coverage and lots of publicity. The company also knew that if things didn’t go well – if performance for any reason was poor – it should expect to get more than its fair share of media coverage as well. During the Valentine’s Day crisis, this is exactly what happened.

The local media, which quickly turned into national media, had a field day with JetBlue’s operational meltdown. Six field days, in fact.

Fortunately, in 2007, there wasn’t the same social media landscape that exists today. There were some early platforms – and customer commentary had a few limited avenues to become public – but, for the most part, print and television media were still the primary mechanisms for the delivery and consumption of news.

During the crisis, the print headlines didn’t miss the opportunity for some sensationalism. Local newspapers played on claims of “hostage” situations that JetBlue had created by trapping customers on airplanes for 10 or 11 hours – which were exaggerations, but for many media outlets, exaggerations were how they connected most effectively with their audiences.

One particularly brutal example of print media’s treatment of the JetBlue failure was Business Week magazine. Leading up to the crisis, Business Week had contacted JetBlue to let the company know that they were about to print a story that announced JetBlue as the number four company in the entire United States for customer service, behind USAA, Four Seasons hotels, and Cadillac, and just ahead of Nordstrom. Pretty good company to be in.

But just before the magazine went to print, as JetBlue was struggling through its winter storm crisis, Business Week decided to update their cover story and literally scribbled out JetBlue’s name and added some text next to their title page headline “Customer Service Champs – here’s the magnificent 25 ‘…and one extraordinary stumble’ ”, to highlight JetBlue’s tragic fall from grace. That was tough for all JetBlue stakeholders to see. But company leaders knew all along that the media could be your best friend or your worst enemy – and the company set out with an attitude that embraced the scrutiny – in good times and in bad. 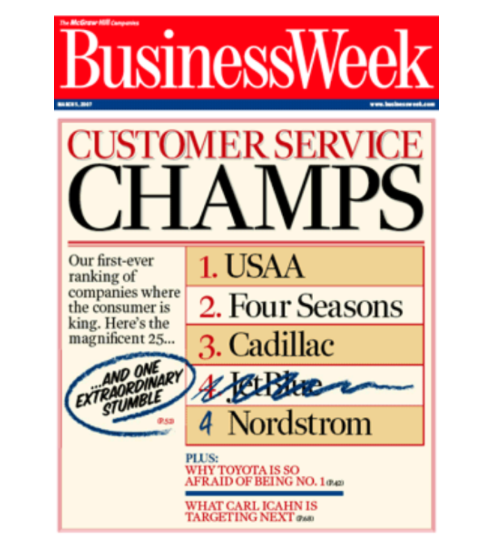 So, when the print media is making things difficult during and after a crisis, how can a leadership team engage with other forms of media to both provide this particular stakeholder what they want, AND, at the same time, leverage their interests to help reach the audiences you want to reach? You use your understanding of their interests to serve your own.

What does the media ultimately want? They want access – ideally exclusive access – to stories and people that their audiences are interested in. During the Valentine’s Day event, people wanted to hear some juicy details. What had gone wrong? How bad did things really get? Who was going to get fired? How did the CEO feel about the company’s performance; what was he going to do about it; and was he going to get fired?

All of these questions in one of the largest media markets in the world. People wanted answers. This begs two questions of leaders when engaging the media: 1) What answers could be given to them? And, 2) What answers should be given to them? In every crisis, leaders are going to have to decide what information they share with various stakeholder groups. Among the many reasons to study crisis leadership are understanding the information different stakeholders want to hear and gaining a working knowledge of the different channels that might be used to deliver the information.

In the case of the Valentine’s Day crisis at JetBlue, media outlets wanted their audiences to hear more about the tragedy…more about how decisions had been made; who made them; why they made them; and who was going to pay for their undeniable disregard for customer safety?

The truth was, nobody at JetBlue had disregarded these things at all – in fact, they were always front of mind. But that fact wasn’t particularly interesting, nor did the evidence suggest in a compelling way that company leaders had actually behaved responsibly.

Given that JetBlue actually had an honest, transparent, and responsible message to share, and that the message made it clear that the entire crisis was, in fact, the company’s fault (a product of leadership decisions that were made for the right reasons but that resulted in exceptionally poor outcomes), there was clearly a single best answer to what JetBlue should do: get company leaders in front of the cameras. JetBlue leadership had a compelling story to tell. And it was a story of ownership, accountability, and sincere repentance. The company made mistakes while trying to do the right thing for all of its stakeholders. Unfortunately, the execution was poor.

In circumstances such as this, it’s best to get the story of ownership and responsibility out to as broad an audience as possible. Most leaders fail to consider how the media as a stakeholder can be an incredibly valuable partner in these pursuits. As with any stakeholder, if you have a clear sense of their interests and can see how your interests can align with theirs as you navigate through a significant challenge, you might just be able to satisfy everyone’s interests by working together.

That said, in the spirit of increasing organizational resilience, it’s worth the time for leaders to develop relationships with local media. It’s also worth applying a media-worthy litmus test to the potential outcomes of challenging decisions. “If what we are about to execute goes sideways,” the leadership team should ask of themselves, “how will the outcome be interpreted by the media. Then, beyond that, how will we, as a leadership team, respond to their interpretation?”

Similar to having a mindset that everything you write in email has the potential to become public, these questions about a high stakes leader’s ultimate intentions are great ones to have in mind before clicking the send button or giving the order to execute.