Binaural Audio is not a recent discovery, nor a phenomenon that requires any relatively new technology. In fact, audio engineers have been experimenting with it for decades.

It has, however, had a recent renaissance. With the rise of the current wave of VR Binaural Audio has established itself as the main driving force behind the audio component of immersive experiences. This dominance is mostly down to the concept of Binaural Synthesis, which we’ll discuss later. Let’s first introduce the phenomenon of Binaural Audio recording, in order to understand how the process works.

The defining feature of Binaural is that it attempts to replicate how humans hear naturally and to “hijack” our brain’s audio processing. The way that our brain processes the sounds around us is very dependent on the positioning of our ears and the differences between the soundwaves reaching our two separate ear drums. When we hear a sound to our left, the sound wave generated reaches our left ear before it reaches our right. This Interaural Time Delay (ITD) gives our brain some foundational information in order to start determining the position of the sound’s source.

In addition to this, all sound waves deform based on the geometry they encounter on their path towards the ears. This includes, importantly, the geometry of our own bodies. The shape of our ears and our shoulders / head, affects all soundwaves in different ways before they reach the eardrum. Essentially, certain frequencies are deformed by this upper body geometry. This “filtering” of the sound waves by our own body shape is another factor that the brain takes into consideration when figuring out a sound’s origin.

Binaural recording, then, attempts to “trick” the brain, by faking the distance between the ears, and the geometry of our bodies. Put simply, it places two microphones (one for each ear) in such a way that the microphone capsule surface is placed exactly where our eardrums would be. 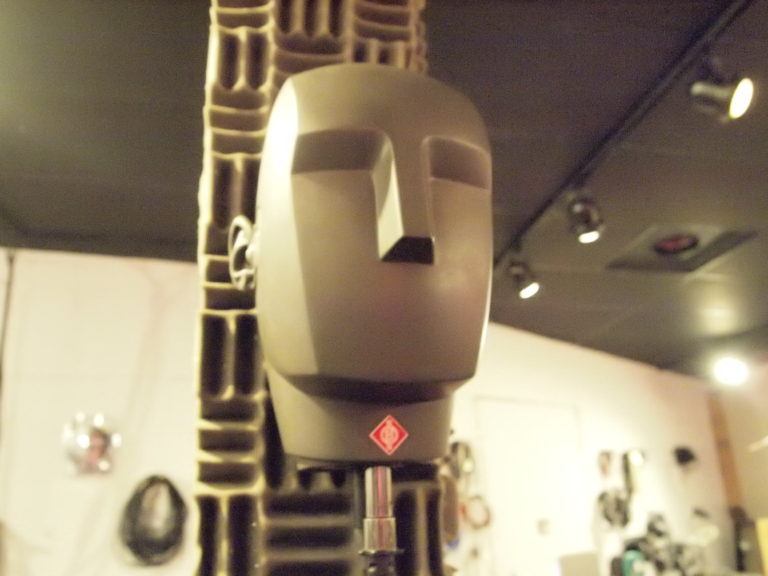 Standalone binaural microphones have silicone moulded ear shapes on either side, and many even include dummy shoulders and head geometry.

In order to playback Binaural Audio, headphones are vital. We want the left and right loudspeakers containing the audio feeds to be as close to our actual eardrums as possible, and without any bleeding between ears. Unlike Ambisonics Binaural doesn’t work through loudspeakers.

When listening to audio recorded binaurally, our brains are tricked into believing that these virtual sounds being piped into our ears are in actuality outside of our head in the space around us.