Facebook, Instagram and Twitter are currently the three most used channels in the UK. We will take you through the key metrics for each of these platforms. You will notice how, despite having the same name, the meanings of the measures do differ.

Facebook, Instagram and Twitter are currently the three most used channels in the UK. We will take you through the key metrics for each of these platforms. You will notice how, despite having the same name, the meanings of the measures do differ.

1) Retweets: Similar to the ‘Share’ functionality on Facebook, this puts another user’s post into the sharer’s timeline. Receiving retweets of your posts is a driver of visibility on Twitter and the strongest signal of engagement.

2) Likes: A more recent engagement type on the platform, Likes allow users to respond positively to a post without putting that content in their feed. A Like suggests a post was valuable in some way to the end user and can increase visibility due to the algorithm prioritising popular content.

3) Mentions: So-called ‘earned social media’ in its purest form, a mention on Twitter – an instance of the brand username referenced in a tweet – is of great value to a brand. A mention is (almost always) public, so therefore can be seen and searched for on, as well as off, Twitter. A mention can also be monitored by software which tracks these mentions and the sentiment of language around them, providing valuable context to the raw data.

4) Impressions: The most prominent metric in Twitter Analytics is impressions. This simply details the number of occasions in which a tweet was visible. 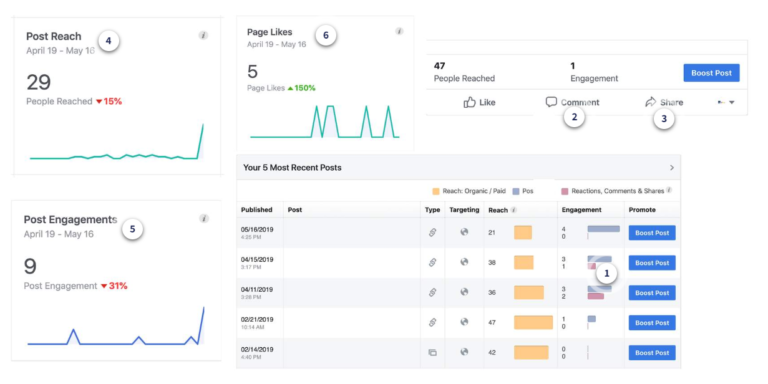 1) Reactions (formerly Likes): A range of reactions – angry, sad et al – through which users can express their response with some emotional dimension. The different reaction types do not technically have different relative values, though can point to customer sentiment e.g. ‘love’ vs ‘angry’.

2) Comments: Of the key platforms, Facebook has had arguably the most cohesive threading of discussions within comments, allowing users to easily see a comment within the wider context of others. This has been a part of the platform’s success as a go-to platform for customer service. Comments here, as on any platform, are a higher level engagement than single-click reactions as they denote higher emotional investment, and also elicit further discussion from other users, helping to build a genuine community around your brand.

3) Shares: A less frequently used engagement feature is Facebook’s share functionality. This is only likely to be used with truly viral content, and so is a key measure in these campaigns where organic spread of the content is the key objective.

4) Reach (Page or Post): Often dismissed as a vanity metric, reach has in fact become important once again. In light of declining organic reach, it is now the most accurate measure of your true audience size. When referring to pieces of content, these numbers encompass both those users who saw the content as a result of organic and of paid activity. This distinction is usually made clear in the insights and analytics tool.

5) Engagement rate: This metric refers to the aggregate number of people who engaged in any way – reaction, comment, click etc – expressed as a percentage of all those people reached.

6) Page Likes: Those who ‘Like’ a Facebook page subscribe to posts from that page. However, in recent years organic reach has declined sharply, meaning that just because someone has liked your page, it doesn’t mean they will be exposed to your content. So, this isn’t the one measure of success it once was and may not deliver true ROI when the focus of marketing resource. 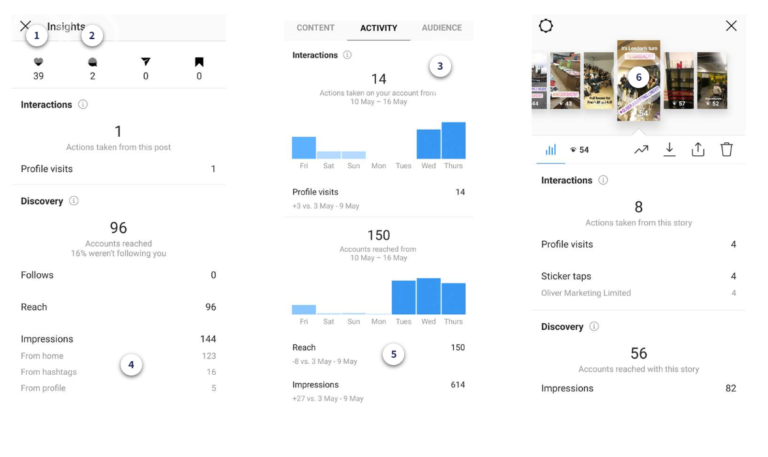 1) Likes: This tends to be the first metric brands look at on Instagram. But, given the ease of liking (a click of the heart icon or a double-tap of the image/ video), it doesn’t necessarily reflect high levels of engagement.

2) Comments: Comments, on the other hand, are a much stronger indicator of engagement. Comments, whether positive or negative, indicate a high level of emotional engagement. If you’re looking to grow a community around your online content (which you should be) then growing levels of comments are a great indicator.

3) Interactions: Engagements of any sort on a post or story. This includes profile visits.

4) Impressions: The total number of times that content was viewed.

5) Reach: The number of users who saw your post or story.

6) Stories: Instagram stories have some separate metrics. For these pieces of content, the interactions metric also includes replies and sticker taps. Additionally, Navigation statistics are provided, which detail instances where a user tapped backwards and forwards in your story; tapped to the next account’s story; and exited your story.