We have set out a fictional strategy, to illustrate how we would have written a social media strategy based on the business and marketing goals of this campaign.

To trend during one of England matches is a vague end goal considering Twitter uses confidential algorithms. In terms of volume, it can range from a few hundred to hundreds of thousands of mentions.

Trending topics can be triggered by audiences tweeting about a TV programme, or news about a celebrity. Not being able to count on any of these, AutoTrader picked up the World Cup traffic and added in content which they hoped would go viral.

Spread rapidly through a broad audience, or according to social media terminology “Going Viral”, is not easily achieved, nor guaranteed.

There are different opinions on this topic:

No matter how you look at the above, the marketing objective is not SMART. It is not measurable, nor specific and it also risks being unachievable.

As you have seen in the scheme above, the social media manager has converted the marketing objective into a measurable SMART objective. Setting the objective to 250,000 interactions, they have quantified what success would look like.

The AutoTrader campaign did trend. However, because this achievement counts on too many dependencies outside the control of the social media team, it should not be considered a viable objective. 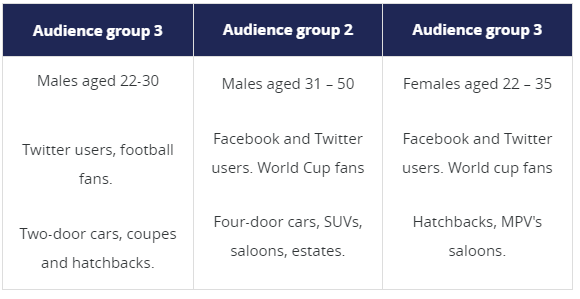 Twitter is a key channel where all of their three audience groups can be found in their free time, especially during a high profile football match. Content travels quickly on Twitter, and this will be required to meet the high number of interactions. Twitter can also provide the added bonus of ‘Trending’, though this is not part of the SMART objective, and the campaign will be a success based on the numbers, it would be pleasing to achieve this status.

Audience group two and three are also present on Facebook. Visual content can be widely shared and viewed amongst audiences, facilitating the SMART objective of reaching 250, 000 interactions.

Audience group one is prevalent on Instagram which is effective at driving engagement and visual storytelling, which will be beneficial when giving away free cars.

Which channels would you use to achieve the SMART social media objective mentioned in this step? Briefly describe how you would use the three channels above to boost views and interactions.