Skip main navigation
Home / History / Lips and Teeth: Korea and China in Modern Times / Portrait of the historian as a young man

Portrait of the historian as a young man

This will introduce you to the professor teaching the course. 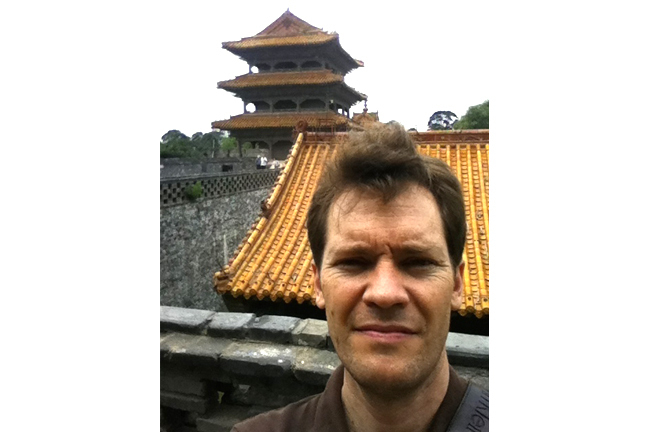 The past is often compared to a foreign country, and in that sense, history is the continuation of travel by other means. I made my first trip to China just over 20 years ago. At that time, I didn’t realize I would end up devoting my career to the study of Chinese history and politics. But I was utterly fascinated by just about everything I saw, heard, tasted… the thousand bicycles riding down broad avenues of Beijing at all hours of the day, the (to my untrained ear) unintelligible staccato flow of Mandarin conversation, the delicious combination of braised tofu and marinated eggplant (I was a vegetarian at the time). Already drawn to ancient philosophies of the East, Taoism in particular, that maiden voyage to the People’s Republic of China left me permanently determined to understand contemporary China as well.After finishing my BA in history at Yale University, I returned to do a PhD in modern China, defined broadly from the year 1600 to the present, and was incredibly fortunate to study under the legendary scholar Jonathan Spence, whose books such as The Memory Palace of Mateo Ricci and Death of Woman Wang electrified the field, and whose Search for Modern China was the rare breed– both a college textbook and New York Times bestseller. I wrote my dissertation on the life and thought of an eminent 17th century Confucian thinker, Gu Yanwu, reconstructing his ideas about political, economic and social reform in the early Qing Dynasty.As I was leaving Yale, I had the good fortune to meet another legendary figure in China studies, Orville Schell, who as a journalist and author had been writing about China’s twists and turns since the 1970s. I joined Orville to help build a new Center on US-China Relations at the Asia Society, a non-government organization headquartered in New York City. As I was leaving Asia Society for Yonsei, Orville and I decided to write a book– a grand narrative of China’s intellectual and political history from the early 1800s all the way to the present that we ended up calling “Wealth and Power: China’s Long March to the Twenty-first Century.”Life, like history, rarely moves in clean, straight lines. It bobs and weaves, takes detours that become destinations, moves in opposite directions simultaneously. For my career as a historian, the detour that opened a new path was Korea. I only visited Seoul for the first time in 2006, to meet my wife’s family and see her native country, but it turned out to be the first of countless visits. In 2010, the vibrant city of Seoul, and stimulating campus of Yonsei University, became our home base. Teaching mostly Korean students, working with mostly Korean colleagues, and talking politics with mostly Korean friends, opened up a new perspective for me on China, past and present.As I was getting to know South Korea, I also found opportunities to visit and learn more about the North. In 2009 I made my first trip to Pyongyang, as part of an academic group led by two recent graduates of Brown University. I’ve managed to make it back to North Korea three more times since then, most recently in 2013 accompanying Google executive chairman Eric Schmidt and former US ambassador to the United Nations Bill Richardson. For a historian of China, visiting North Korea feels like time travel, given how the charismatic dictatorship and socialist ethos of Kim Jong Un’s North Korea resembles Mao’s China, while the “grassroots marketization” and consumer revolution in Pyongyang evokes aspects of Deng’s China. Overall, my detour into Korean studies, North and South, has given me a fresh angle on China, as well as another topic dear to my heart, US-China relations.Historians aim to be dispassionate– we seek to get as close as possible to an objective account of the past, to a view of things from that perfect Archimedean point. Yet we also cannot deny that we travel into the past with our individuality and subjectivity intact. We must be on guard against personal bias that distorts “things as they actually happened” (the deceptively simple definition of historical studies provided by Leopold von Ranke). But we also want to bring the dusty records of the dead back to life, which takes energy, curiosity, and a willingness to connect past and present. Dispassionate is not passionless. This brief autobiography hopefully explains where some of my passion for the study of China and Korea comes from. I hope in the weeks ahead I hope that you too can tap into your “passionate dispassion” as we travel through the Sino-Korean past.
© John Delury

Hi there! We hope you're enjoying our article: Portrait of the historian as a young man
This article is part of our course: Lips and Teeth: Korea and China in Modern Times