You will learn about the land war that brought Japanese troops up the Korean Peninsula and into Manchuria. 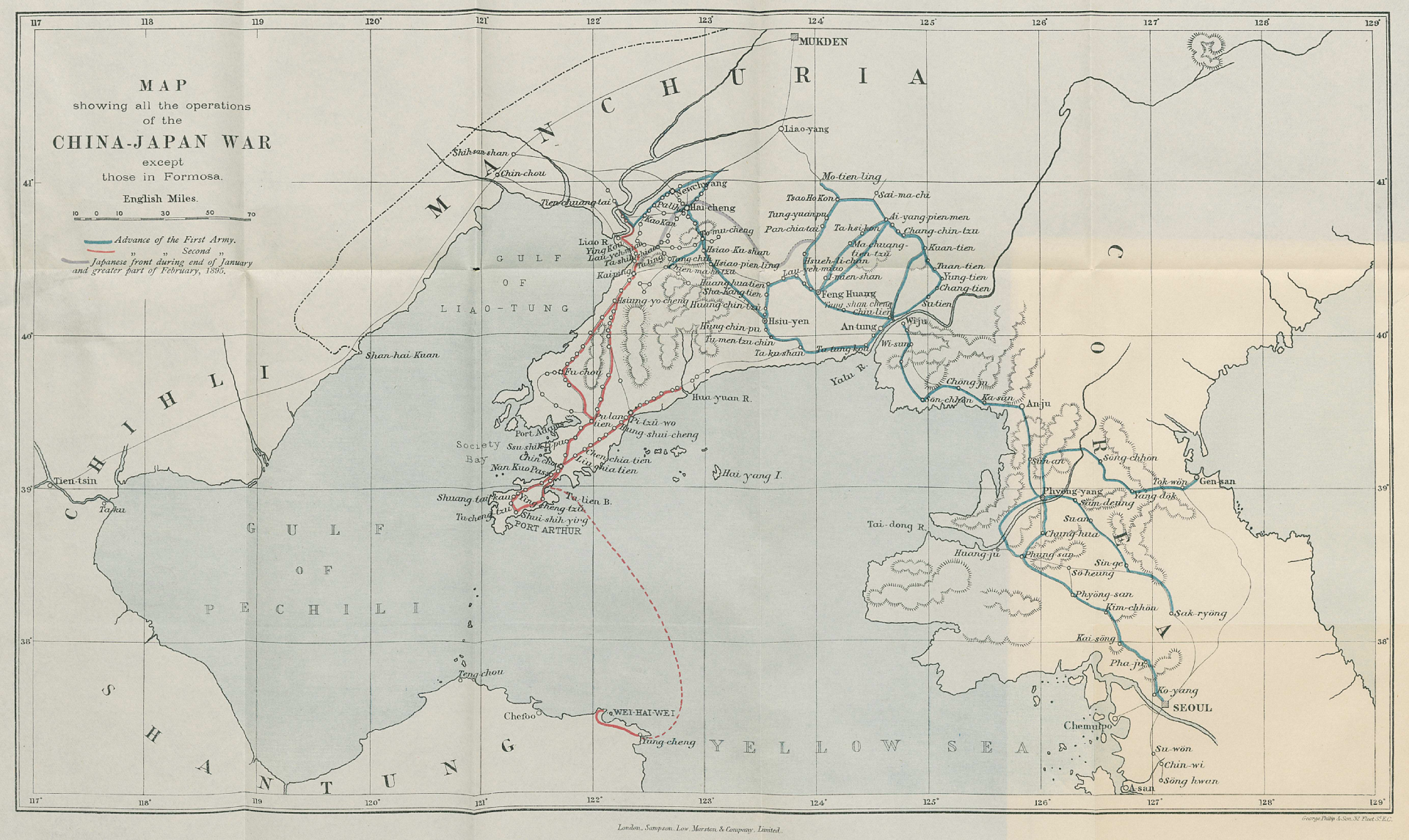 Japan started sending thousands of troops to Seoul, landing at the capital port at Incheon, in June 1894. The pretext was to defend Japanese lives and property owing to the anti-government Donghak rebellion. But the geopolitical subtext was challenging Qing hegemony over Korea. On July 23rd Japanese troops seized control of Seoul, taking King Gojong hostage. By mid-September, Japan’s army marched on Pyongyang and seized the northern citadel from Chinese garrisons protecting it, opening the passage to China proper. The Meiji military leadership remembered the lesson of the Black Dragon War, and focused as much on sea power as they did on a successful land campaign. They had been investing heavily in naval build-up and modernization, and 1894 was the chance to test their mettle against the Qing, which had similarly been buying European battleships as well as building them at the modern shipyard in Fuzhou.The overseer of China’s northern fleet, Li Hongzhang, however, seems not to have studied the lessons of the 1590s when a Japanese invasion force arrived again in the 1890s. After Japanese cruisers intercepted Qing transport ships, with over 1,000 men lost in the sinking of the Kowshing, Li began pulling naval assets back to an imaginary line on the Chinese side of the Yellow Sea between the Shandong Peninsula and Yalu River border. After Japanese bombardment, Li pulled back even further to a maritime defense line between the Qing navy’s two major bases at Dalian, on the Liaodong Peninsula, and Weihai on the Shandong Peninsula. Rather than craft a strategy to deny Japan Yellow Sea access, he effectively ceded control of the waters off Korea’s west coast.The Japanese navy made the most of the fortuitous opening, which allowed them to implement their strategy of an integrated invasion into Chinese controlled Manchuria—the heartland of the ruling Manchus. Li finally dispatched a squandron of his prized warships across the Yellow Sea, and engaged Japan’s fleet near the mouth of the Yalu River in mid-September 1894. In the next step you will learn more details of the encounter, suffice it to say here, as a result Li pulled back again.Journalist James Creelman was an adventurous correspondent for the New York World, and embedded with Japanese troops at the invitation of their government so that the world could bear witness to the modernized, civilized great power of Meiji (this strategy backfired when Creelman reported on massacres against Chinese civilians by the Japanese occupation force in Lushunkou). In his news dispatches, and subsequent book On the Great Highway: The Wanderings and Adventures of a Special Correspondent (1901), he described the close coordination between Japanese sailors and soldiers as they converged on their first major target in the Qing empire, the port of Dalian:“The whole Japanese force—men, horses, ammunition, food, and cannons—was carried to the land in little flat skiffs…. All along the coast could be seen the steamers from which the main Japanese army, commanded by Field-marshal Count Oyama, had just landed, and the great fleet of warships which had conveyed the invaders across the Yellow Sea.”It was precisely the vision of which Hideyoshi had dreamt, but failed to realized. After taking Dalian in a pincer movement by land and by sea, Japanese forces did the same thing to the last Qing base on the Shandong Peninsula, wiping out China’s northern fleet in February 1895. All that was left was for Japanese troops to march on the capital.
© John Delury

Hi there! We hope you're enjoying our article: March to Manchuria
This article is part of our course: Lips and Teeth: Korea and China in Modern Times