Learn about the meeting between Xi Jinping's father and Kim Jong Un's grandfather. 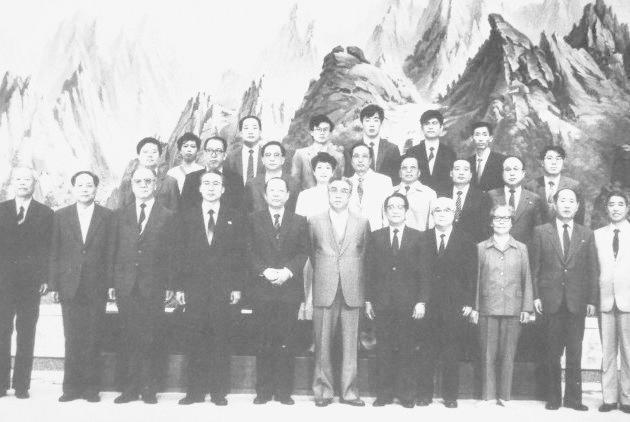 The distant, edgy relationship between Xi Jinping and Kim Jong Un might seem surprising given the family ties between Xi’s father and Kim’s grandfather. Xi Zhongxun met Kim Il Sung on a number of occasions to ensure good relations between the PRC and DPRK in the last decade of the Cold War.Kim’s greatest challenge in the early 1980s was ensuring a smooth succession of “supreme leadership” to his son, and he traveled to Beijing in September 1982 for the first time in years in order to secure support from Deng Xiaoping, who was not wild about the idea.The next month, Xi Zhongxun, newly-appointed to the ruling Politburo of the CCP, visited North Korea for in-depth talks with Kim. In a speech delivered in Kaesong, where the Korean War Armistice had been negotiated, Xi gave implicit support of Kim’s succession plan when he toasted “Dear Leader Kim Jong Il’s health.” My Yonsei University colleague Kim Yongho located the North Korean newspaper report of Xi’s trip, which he cites in his superb book North Korean Foreign Policy. Xi repeated the standard demand that the U.S. withdraw all troops from the South and warned, “If the US wages war again, the Chinese people will not only cross the Yalu river, but also with other means assist Choson Korea’s struggle (Kim, 56).”Xi met Kim on October 14, 1982 at the presidential residence in Pyongyang (now the Kim family mausoleum, Kumsusan Memorial Palace). Straying far from formal agenda items, Xi talked in depth about his experiences as a victim of Maoist radicalism. “For nearly 16 years, up to 1978, I was without work,” he said in a playful understatement quoted in the Chinese-language Biography of Xi Zhongxun. Demotion to a factory managerial position wasn’t bad, Xi said, and he “learned many things from my worker-comrades (Liu and Wang, 299).” But when the Cultural Revolution heated up, a radical Maoist Red Guard group kidnapped him from the factory and took him to his native Shaanxi province for a year of incarceration and struggle sessions. “Even though I was already a ‘dead tiger’ by then,” Xi told Kim, “they still struggled against me (Liu and Wang, 313).” Judging from the record of their talks, it seems Xi and Kim had not just a diplomatic meeting that day in Pyongyang, but a kind of heart-to-heart.Xi’s trip was followed by Kim Jong Il’s secret visit to China in June 1983, which symbolized Beijing’s tacit (albeit begrudging) approval of the dynastic succession plan.When Kim Il Sung returned to China in May 1987, Xi was at the Beijing Railway Station to welcome him and see him off three days later. Kim visited China again in May 1988, and that July, Xi led a National People’s Congress delegation to the DPRK. Kim received Xi in the east coast city of Chongjin, where he invoked their shared wartime past. “We think of you as always being our rear area support, and we have faith that the friendship and unity between our two countries and peoples will continue to consolidate and develop,” Comrade Kim told Comrade Xi in Chongjin.

View Course
The relationship between Xi Zhongxun and Kim Il Sung serves as a reminder of the deep bonds between China and North Korea’s communist elites. But the disconnect between their son and grandson also shows how history is more of the humbling study of indeterminacies and ironies, than it is the confident science of inevitabilities and path determinacy.
© John Delury

Hi there! We hope you're enjoying our article: Family ties
This article is part of our course: Lips and Teeth: Korea and China in Modern Times