China-Korea ties were based on the tributary system. 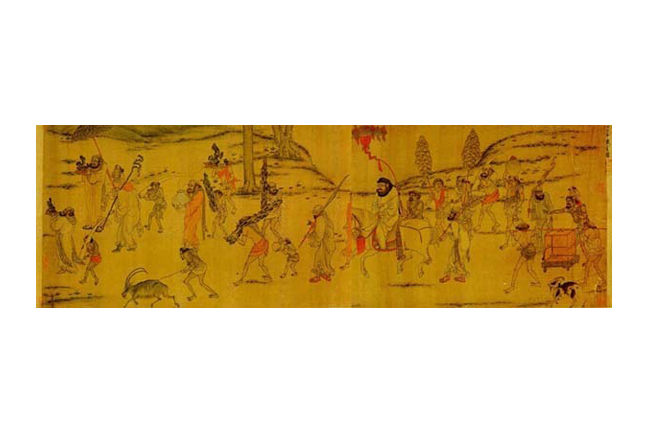 In one of my favorite books of intellectual history, Thomas Kuhn devised a novel, and profoundly influential, theory for the historical evolution of scientific innovation. Kuhn describes how a community of researchers, wittingly or unwittingly, work on a set of problems all of which are defined by an overarching ‘paradigm’. This laborious, piecemeal effort is called ‘normal science.’ But then one or two scientists come along who ignore the paradigm and instead focus on the ‘anomaly’—the outlier in the data set, the piece of the puzzle that doesn’t fit, that ‘normal’ science confidently tosses out. When that renegade researcher is able to construct a new paradigm out of the anomaly, the result is “scientific revolution”, occasionally on the scale of Galileo, Newton, Darwin, or Einstein. What does Thomas Kuhn’s Structure of Scientific Revolutions have to do with the history of China-Korea relations and our topic in this activity, the tributary system? Well, just like the hard sciences can be traced over time through the dialectical interplay of paradigms and anomalies, so can fields of historical inquiry. And one of the most significant “paradigms” generated to explain China’s “anomalous” (by Western standards) system of foreign relations was Harvard historian John King Fairbank’s notion of “tributary system.” What was the tributary system? Fairbank explained in an early article “On the Ch’ing Tributary System”, published in 1941 with his frequent collaborator S.Y. Teng, how “tribute” had a twofold significance. For Chinese rulers, on the receiving end, tributary offerings were recognition of the cultural and political superiority of China. For most “barbarian” envoys, on the other hand, tribute was often mere pretext for what was in reality a trade delegation to the capital of a wealthy and powerful neighbour.The ambiguity between the symbolic and material meaning of “paying tribute” was fundamental to the flexibility and longevity of the system, “a scheme of things entire,” as Fairbank elegantly labeled it. Decades later, at his prime as doyen of China studies in the United States, Fairbank edited The Chinese World Order: Traditional China’s Foreign Relations (1968), which further elaborated the “tributary system” paradigm as the key to explaining Beijing’s approach to foreign affairs from antiquity all the way to the fall of the Qing Dynasty in 1911.What then was Korea’s function in the system? “Obedient and docile” Korea (as the Ming Wanli Emperor described in his Black Dragon War decree) was the linchpin of the whole system—the North Star as it were that guided other rulers by demonstrating the duties and prerogatives of the perfect tribute-bearing ally. The tributary system was explicitly and demonstrably hierarchical—the closer you were to the top (i.e., China), in political and cultural terms, then the more tributary missions you were allowed to make to Beijing. No one got to pay more tribute than the Koreans: a recent book by Dongguk University professor Seo In-beom estimates that Joseon kings dispatched over 1,500 missions to China, each one typically including hundreds of members in the delegations. Of course, Korea enjoyed proximity to the “Northern Capital” of Beijing—still, it was an arduous 2,000 kilometer trek. No foreign country comes close to Joseon in terms of tributary intimacy with the Ming and Qing. As an ultra-orthodox Confucian country, and stalwart political ally of China, Korea the tributary ideal incarnate.
© John Delury

Hi there! We hope you're enjoying our article: Tributary paradigm
This article is part of our course: Lips and Teeth: Korea and China in Modern Times