Find out more
Home / Healthcare & Medicine / Coding & Programming / Bioinformatics for Biologists: An Introduction to Linux, Bash Scripting, and R / The Terminal and the Command Line

The Terminal and the Command Line

For the bioinformatician, the things which make Linux most powerful are the terminal and, within it, the command line.

Most Linux distributions come with an array of graphical user interface (GUI) based software included in them. There will generally be at least one web browser, a word processor, spreadsheet software and software for delivering presentations amongst them. In addition, in the field of bioinformatics, there are many graphically based programs available for Linux, which can be used for both data analysis and visualisation. However, for the bioinformatician, the things which make Linux most powerful are the terminal and, within it, the command line.

The Linux terminal is simply software which allows a user to interface with the computer by typing in text-based commands. The Mac OS has a terminal which is direct equivalent of the one found in Linux. Older Windows versions had the MS-DOS prompt. Windows 10 now has the Windows Terminal, in addition to similar text-based interfaces such as PowerShell and Command Prompt. 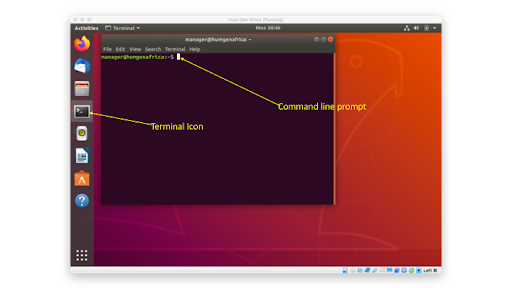 The command line is the current line within the terminal which can be used to input text commands. Each command is run through a shell, a program which sends commands to the computer for it to interpret. Common shells include bash, zsh, tcsh/csh and ksh. In this course, we will focus on the bash shell. The basic commands tend to be the same across all shells but some of the more advanced commands may vary in syntax a little between them.

The command line allows users to run a vast range of commands and includes facilities to run successive commands as one single operation, with the output of one command fed directly into the next. It is also the starting point for running most bioinformatics software.

Have you used a command line before? Share your experience with your fellow learners in the comments area below.