Genomic sequences, known as gRNA, consist of all of the genetic information needed to encode SARS-CoV-2 and its associated proteins. The organisation of this information varies between different viruses to generate different ‘classes’. SARS-CoV-2 is classed as a positive-sense single-stranded RNA virus, similar to that of common cold viruses where the genome is organised as a single contiguous RNA genome. This class of viruses produces unique sub-genomic RNA sequences as part of their life cycle (discussed below). The SARS-CoV-2 genome is 5′-capped and has 29,870 bases and a 3′ poly(A) tail of variable length. It encodes at least 13 recognised open reading frames (ORFs), each of which contains regions with specific functions key to the virus’ transcription, translation and replication. The coding elements of gRNA are hugged by a 5′ untranslated region (UTR) (265 nucleotides) and a 3′ UTR (337 nucleotides)

When a host cell is infected, gRNA synthesis occurs in double membrane-bound organelles (replicative organelles) within the cell. Utilising the original gRNA from the entered virion, the replicative-transcription complex (RTC) creates more gRNA sequences. This is achieved through anti-genomic sequences. These are complementary to the original viral genome and are created by the RTC to act as a minus-strand template. The minus-strand template then utilises complementary base pairing to form new positive-strand RNA sequences for new gRNA.

Before new gRNA synthesis occurs, the anti-genome is created in these new replicative organelles – these are virally-induced membranes. The anti-genome is a full-length complement to the original gRNA and acts as the template for synthesis of the new gRNAs. After ‘transcription’ using the anti-genomic sequences, new gRNA can take one of three paths. The first could lead to the new gRNA being used to create new enzymes and accessory proteins key to viral replication within the cell. The second path is creating more new gRNAs. The third is that the gRNA could acquire a nucleocapsid shell, then a lipid bilayer membrane to form a new virion before leaving the cell (Figure 1). 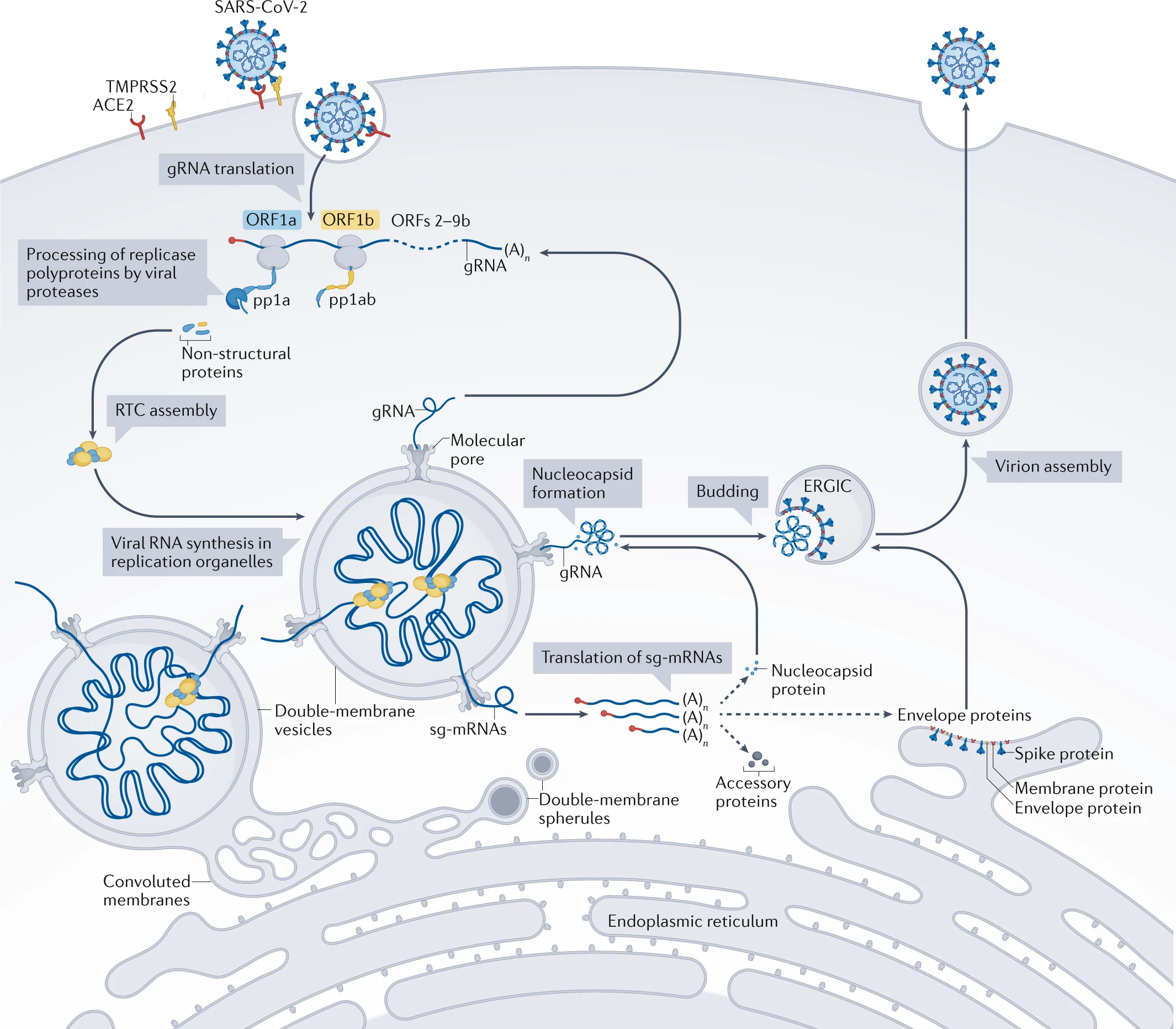 Sub-genomic RNA sequences are a unique feature of positive-sense RNA viruses. These are produced by the discontinuous transcription of virion structural genes during active replication and result in the formation of rearranged template sequences that are not found in juxtaposition in the native RNA genome of the virus. The gRNA sequences found for these proteins are what is looked for in COVID-19 tests.

Whilst the anti-genome is being generated in replicative organelles, these smaller, minus-strand sgRNAs are also produced. These then originate a nested group of sg-mRNAs which are fundamental in the synthesis of structural proteins necessary for virion packaging, consisting of the membrane, spike, nucleocapsid and envelope proteins. The nucleocapsid protein in particular is acquired by newly formed gRNAs before being able to form a new virion (Figure 1).

These sub-genomic sequences provide unique opportunities for the virus, mainly by enabling greater functionality out of a smaller original genomic sequence. They also present opportunities for tackling the pandemic. Sub-genomic RNAs are only present for virion formation during an active infection. As such, evidence from the University of Exeter showed they can be used to better track the infectivity and disease duration with SARS-CoV-2 infection, compared to the current wide-scale testing approaches.