Did you ever ask someone what a new delicacy tastes like, and they respond with: “It tastes like chicken.”

The truth is, that we use references all the time. It gives us a place to start. A “reference” point to narrow things down to. When you ask for directions, the person giving you directions will first check whether you are familiar with certain landmarks. We do the same when it comes to sequencing reads.

When your reads are obtained from the sequencing machine, here are two methods of assembling your reads. As shown in Figure 1, we can align the reads from scratch (de novo assembly); usually by way of overlapping the reads until they form a continuous long read called a contig. The contigs are then overlapped in the same way until they eventually become a full genome. 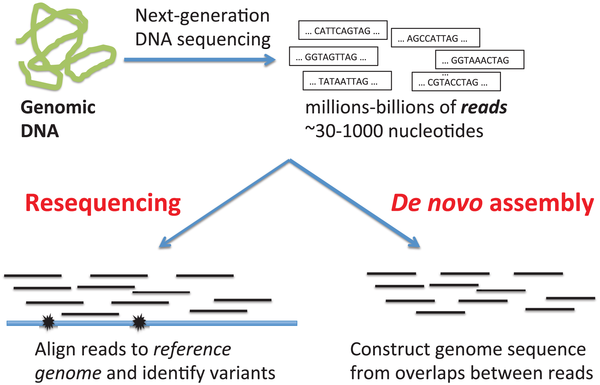 A reference genome of a species is therefore a genome that was constructed in this way, by using the sequenced reads of a member of that species. This is normally stored in a FASTA file.

In Figure 2, the reference genome shows that there is a nucleotide “T” at a particular position. However, the aligned read from your sample shows a “C”. This is a possible mutation. But this is definitely not a process that you would want to complete manually if you have thousands or billions of reads.

C. Details in the main text”>

For resequencing, these tools always require a reference genome (FASTA file) and the FASTQ files containing your reads. You may also need to submit files containing the locations of the primer and adapter sequences that your tool needs to take into consideration when doing the alignment, or which you can use to do prior trimming of your reads before you start the alignment/mapping process. This Difference Between article contains further information on the difference between the two sequences.