How is SARS-CoV-2 sequencing done?

There are many sequencing technologies used for SARS-CoV-2 (Figure 1). In this step, we will approach a broadly used protocol based on viral whole-genome sequencing (WGS). The method consists of viral RNA isolation, Library preparation, Sequencing run and Analysis.

1. Viral inactivation
Sequencing of SARS-CoV-2 first requires inactivation of live virus either by heat or inactivating buffer so that the laboratory worker can handle the sample without putting themselves at risk. This procedure is carried out at various Biosafety Levels (BSL) worldwide. In the UK, prior to the current pandemic, this viral isolation would have been carried out at BSL3 facilities, but in early 2020, Public Health England issued a directive allowing this work to be completed at BSL2+. At which BSL is SARS-CoV-2 inactivation carried out in your country? Comment below. 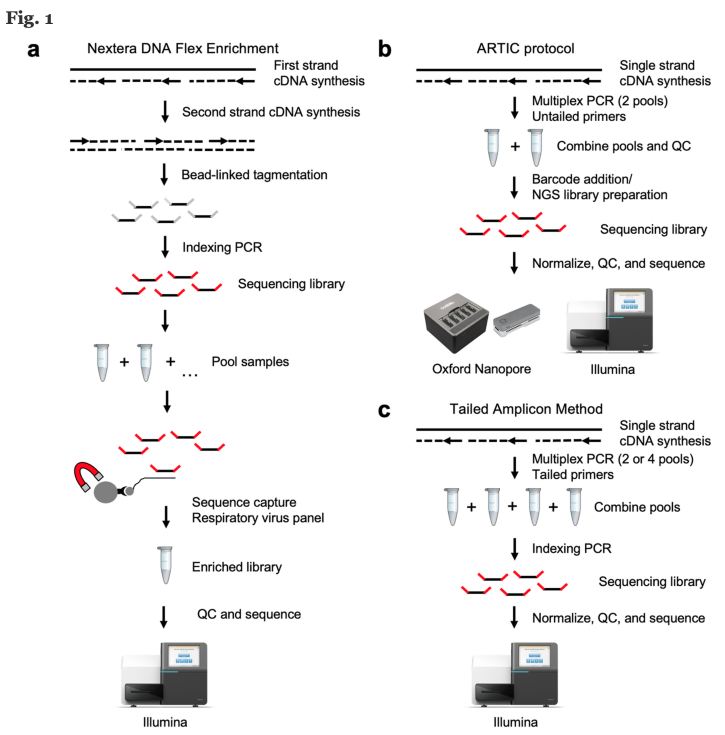 Figure 1 – Methods for SARS-CoV-2 genome sequencing. a.) In Illumina’s Nextera DNA Flex Enrichment protocol cDNA is tagmented and made into barcoded sequencing libraries, which are then enriched using sequence capture with a respiratory virus panel containing probes against SARS-CoV-2. b.) In the ARTIC protocol, first-strand cDNA is enriched by amplifying with two pools of primers to generate amplicons tiling the SARS-CoV-2 genome. These amplicons are then subjected to either Illumina or Oxford Nanopore library preparation, using methods that either directly add adapters to the ends of the amplicons or to fragment them to enable sequencing on a wider variety of Illumina instruments. c.) The tailed amplicon approach, developed here, enriches first-strand cDNA using ARTIC v3 primers containing adapter tails. This allows functional sequencing libraries to be created through a second indexing PCR reaction that adds sample-specific barcodes and flow cell adapters. Source: BMC Genomics

1. Complementary DNA synthesis (not used for all technologies)
RNA extracts must be converted to cDNA because amplification methods, such as PCR, require DNA molecules as a template. A reverse transcriptase enzyme is used to synthesise the cDNA.

2. PCR Set-up and Amplification (not used for all technologies)
The cDNA is then added to a reaction mix including PCR reagents and SARS-CoV-2 specific primers, each targeting small regions of the viral genome. A specific primer targeting strategy is used to ensure that the entire genome is covered by these small regions. Samples are placed in a thermocycler, where amplification takes place. At the end of the process, millions of viral DNA fragments are generated.

3. Index PCR Set-up
NGS technologies allow multiplexing ie. pooling several different samples in a single sequencing run. In this process oligonucleotide indexes are added to each individual sample, ‘barcoding’ them, using a PCR procedure. This allows the individual samples to be separated computationally after sequencing.

4. Sample Pooling
The concentration of the DNA of the barcoded samples is measured and equal amounts of DNA of each sample are pooled in a single tube.

5. Clean-Up
NGS methodologies are highly sensitive. Inhibitors and reagent residues must be removed through DNA purification. It is strongly recommended to use magnetic beads purification protocols for the clean-up step.

Depending on the technology used, the samples are loaded onto a flow cell and run on a sequencer that will generate fluorescent reads which can be captured by a camera or one which passes the entire molecule through a Nanopore and captures the sequence in real-time.

Sequencing data is demultiplexed and the viral genome is assembled (similar to an alignment) using bioinformatics tools. There are many analysis pipelines, most commonly using command line, but there are also graphic interface tools.

There are specific ARTIC Network-derived protocols available for both Illumina and Oxford Nanopore Technologies platforms.

We will address the details of Bioinformatics and Sequencing in upcoming courses of this series.

If you are interested in seeing a sequencing workflow in a laboratory, watch this video (note, the video is silent) :

Please note: This video is for educational purposes only, filmed at UCL Genomics, for MSc training. Dr Paola Niola performed denaturation and dilution of libraries, and Charlotte Williams performed MiSeq set up, filmed and edited by Sandra Cantilena.