In this article, Ben shows learners how short term and long term goals might be used in tandem

While you should always give an athlete enough time to achieve a goal, you do not want to give them so long that the goal becomes tedious. The time given to achieve the goal will depend on a number of factors; (a) the type of goal (outcome, performance, process), (b) the stage of training (see image below), (c) mitigating factors (e.g. injury, stressors, unanticipated events).

Taking into account the factors that we mentioned above and the annual training plan for an athlete, the next element of this section explores how short-term goals might fit into long-term and outcome goals. An athlete might set an overriding long-term outcome goal for them to achieve at the end of the competitive season, for example “Finish 3rd in the 1500m at the World Championships”. During the general preparations phase this might include goals such as “Continue flexibility work on left hamstring to reduce risk of injury”. In the specific phase it might be more along the lines of technique, such as “Work with coach on pacing strategy to prevent fatigue and cramp onset” in the final 300m”, and in the pre-competitive phase this might be a performance based goal such as “Knock 0.6s off 1500m PB during a national league competition”. If the athlete meets each of these targets, and they are set using the SMART principles they are then more likely to attain their long-term performance goal of finishing 3rd in the world championships.

By using a goal-setting plan such as this, you can outline short-term (micro-cycle) and longer term (meso-cycle goals) to suit each phase of the training and competition season. 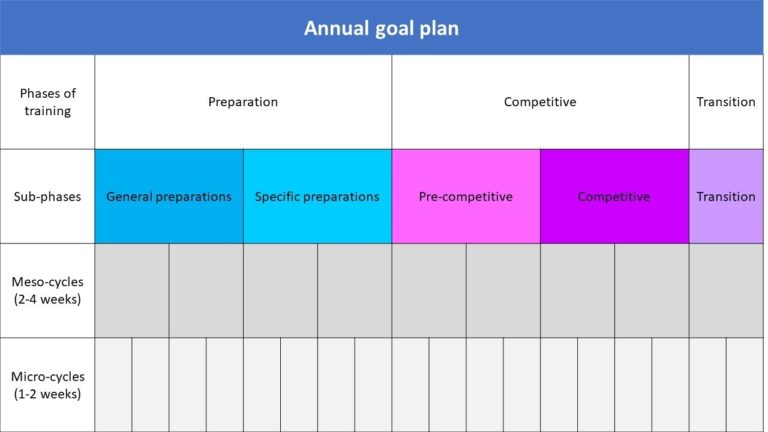