The application of the systems approach to study complex biological systems 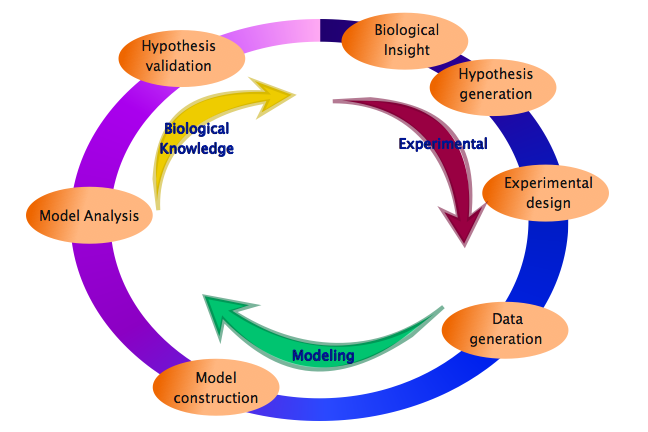 In the previous steps we outlined that a biological system is constructed with biochemical components including metabolites and genes, and the biological function or phenotype is controlled by the interactions between components.

These concepts demonstrate that we must study the system as a whole to understand the whole system. Let us imagine a jigsaw puzzle.

A jigsaw puzzle image with (i) pieces not connected, (ii) enough pieces connected to to identify most components in the picture and (iii) the complete picture showing all components

In the omics era biological experiments have provided, for the first time, very large holistic datasets representing the components and their interactions observed across one or multiple functional levels at the global level. We can measure thousands of biochemical in one sample. The emergence of the omics disciplines has provided fresh impetus to the systems biology approach.

Data analysis and synthesis deconstructs the data to quantitatively define the important components and more importantly the interactions that drive the biological function or phenotype.

Systems modeling is the construction, calibration and validation of a computational model which reflects the interactions of the biological system that drive the biological function or phenotype. This model is constructed first with one or multiple networks to qualitatively define the components and interactions, then additional quantitative biological data is added as the next layer on to the networks. The model is then calibrated and validated to assess whether it robustly defines the system. If the model is not validated then further biological data is required and the cycle starts again to provide more data to the model to improve its predictability. If the model is validated then it can be applied to in-silico predict how a perturbation to the biological system will influence the function or phenotype. Think about the yeast Saccharomyces cerevisiae whose genome contains approximately 6500 genes. If we wanted to study the effect on metabolism of knocking out each of the genes one at a time then we would have to perform 6500 biological studies – this would require many years of work in the laboratory. However, by applying systems biology this can be performed in a much shorter period of time and at a lower cost. This demonstrates some of the advantages of applying a systems biology approach.

Can a Biologist Fix a Radio? — or, What I Learned while Studying Apoptosis, by Yuri Lazebnik.