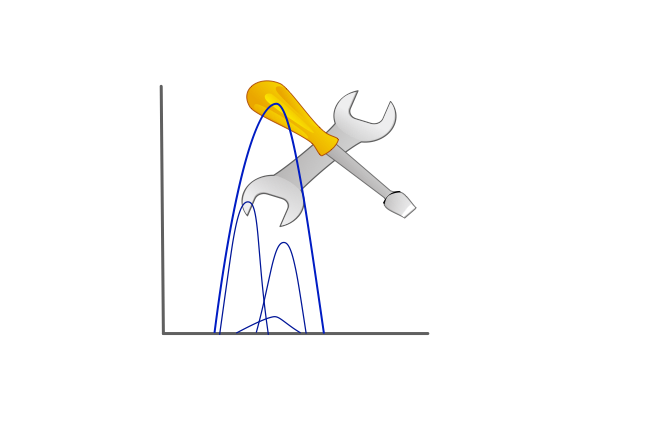 Data processing is the computational process of converting raw LC-MS data to biological knowledge and involves multiple processes including raw data deconvolution and the chemical identification of metabolites.

The process of data deconvolution, sometimes called peak picking, is in itself a complex process caused by the complexity of the data and variation introduced during the process of data acquisition related to mass-to-charge ratio, retention time and chromatographic peak area.

A LC-MS dataset is three dimensional, it includes three components for each metabolite feature (1) the retention time, (2) the mass-to-charge ratio and (3) the chromatographic peak area which is related to the concentration of the metabolite. We apply all of these components to construct a data matrix defining each metabolite and each peak area in each sample.

In different samples, the same metabolite may be detected at a slightly different mass-to-charge ratio or retention time. The next process is to integrate the data acquired from each separate sample in to a single data matrix. To do this we can reduce the variation by aligning the mass-to-charge ratio or retention time across all samples though this is never a perfect process. The data is then placed in to ‘bins’, where each bin for a mass-to-charge ratio and retention time covers a small range which is equivalent or greater than the observed variation in the dataset. The data across all samples is then binned together to ensure the same metabolite in each sample is reported as the same metabolite in the single integrated dataset. This is critical for further data analysis processes. So by applying these bins we can integrate data from across different samples to construct a single data matrix that can be used in the data analysis.

For untargeted studies this process is complex as the metabolites present are not known and so peak picking operates with no prior information. For targeted assays the metabolites, mass-to-charge ratios and retention times are known and software can be programmed to only search for these metabolites. This makes the process much simpler.

So the data matrix is constructed, representing the metabolite composition of all the samples that were analyzed. The next steps are to chemically identify metabolites and perform data analysis to define the biologically important metabolites.