Modern Science: Should Microscopes be Used?

Read two texts from Robert Hooke and Margaret Cavendish on the use of microscopes, one for and one against the use. 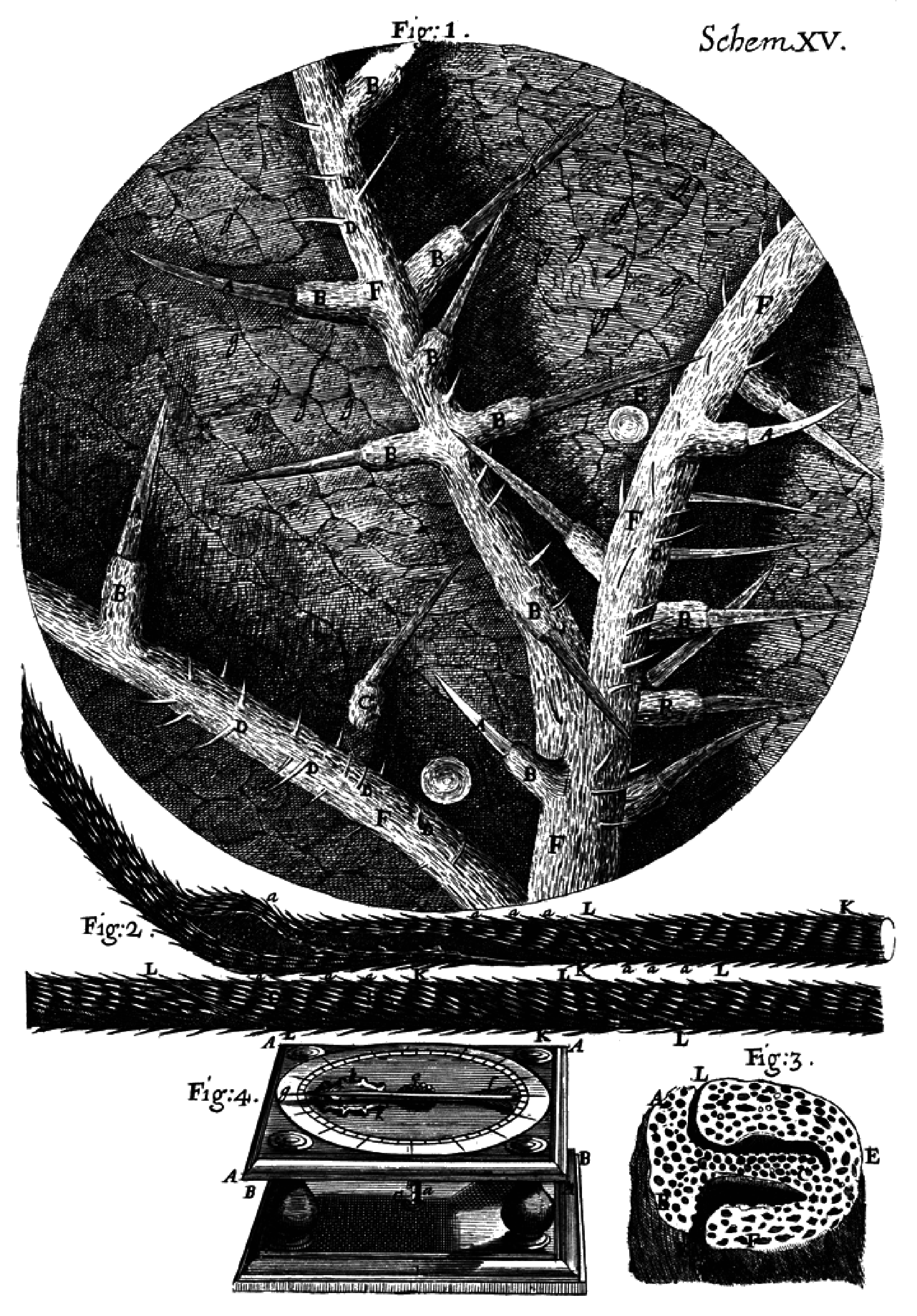 The following two texts discuss the use of the microscope, one arguing in favour of its use in natural philosophy, the second claiming that it is not providing any new knowledge.

The first text is from Robert Hooke’s Micrographia (written in 1665). In this book Hooke argues for the utility of the microscopes and he also provides a series of drawing of objects seen through the microscope, the most famous being a fly’s eye and a plant cell. The second text is from Margaret Cavendish’s book Observations upon experimental philosophy (published 1668). Cavendish rejects both the Aristotelian philosophy and the new mechanical philosophy of Descartes, Hobbes or the members of the Royal Society, arguing for a vitalist materialism – theory according to which all things in nature are made of self-moving and vital matter.

The next care to be taken, in respect of the Senses, is a supplying of their infirmities with Instruments, and, as it were, the adding of artificial Organs to the natural; this in one of them has been of late years accomplisht with prodigious benefit to all sorts of useful knowledge, by the invention of Optical Glasses. By the means of Telescopes, there is nothing so far distant but may be represented to our view; and by the help of Microscopes, there is nothing so small, as to escape our inquiry; hence there is a new visible World discovered to the understanding. By this means the Heavens are open’d, and a vast number of new Stars, and new Motions, and new Productions appear in them, to which all the ancient Astronomers were utterly Strangers. By this the Earth it self, which lyes so neer us, under our feet, shews quite a new thing to us, and in every little particle of its matter, we now behold almost as great a variety of Creatures, as we were able before to reckon up in the whole Universe it self.

It seems not improbable, but that by these helps the subtilty of the composition of Bodies, the structure of their parts, the various texture of their matter, the instruments and manner of their inward motions, and all the other possible appearances of things, may come to be more fully discovered; all which the ancient Peripateticks were content to comprehend in two general and (unless further explain’d) useless words of Matter and Form. From whence there may arise many admirable advantages, towards the increase of the Operative, and the Mechanick Knowledge, to which this Age seems so much inclined, because we may perhaps be inabled to discern all the secret workings of Nature, almost in the same manner as we do those that are the productions of Art, and are manag’d by Wheels, and Engines, and Springs, that were devised by humane Wit.

Although I am not able to give a solid judgment of the art of ‘‘micrography,’’ and the several dioptrical instruments belonging thereto, by reason I have neither studied nor practiced that art; yet of this I am confident, that this same art, with all its instruments, is not able to discover the interior natural motions of any part or creature of nature; nay, the question is, whether it can represent yet the exterior shapes and motions so exactly, as naturally they are; for art doth more easily alter than inform: As for example; art makes cylinders, concave and convex glasses, and the like, which represent the figure of an object in no part exactly and truly, but very deformed and misshaped: also a glass that is flawed, cracked, or broke, or cut into the figure of lozenges, triangles, squares, or the like, will present numerous pictures of one object. Besides, there are so many alterations made by several lights, their shadows, refractions, reflexions, as also several lines, points, mediums, interposing and intermixing parts, forms and positions, as the truth of an object will hardly be known; for the perception of sight, and so of the rest of the senses, goes no further than the exterior parts of the object presented; and though the perception may be true, when the object is truly presented, yet when the presentation is false, the information must be false also.

And it is to be observed, that art, for the most part, makes hermaphroditical, that is, mixt figures, partly artificial, and partly natural: for art may make some metal, as pewter, which is between tin and lead, as also brass, and numerous other things of mixt natures; In the like manner, may artificial glasses present objects, partly natural, and partly artificial; nay, put the case they can present the natural figure of an object, yet that natural figure may be presented in as monstrous a shape, as it may appear misshapen rather than natural: For example; a louse by the help of a magnifying glass appears like a lobster, where the microscope enlarging and magnifying each part of it, makes them bigger and rounder than naturally they are. The truth is, the more the figure by art is magnified, the more it appears misshapen from the natural, insomuch as each joint will appear as a diseased, swelled and tumid body, ready and ripe for incision. But, mistake me not; I do not say, that no glass presents the true picture of an object: but only that magnifying, multiplying, and the like optic glasses, may, and do oftentimes present falsely the pictureof an exterior object; I say, the picture, because it is not the real body of the object which the glass presents, but the glass only figures or patterns out the picture presented in and by the glass, and there mistakes may easily be committed in taking copies from copies.

Which are, according to Hooke the benefits of using the microscope?

Given that Cavendish has Hooke’s text in mind, which are her counterarguments regarding the use of microscope? Which are the characteristics of nature that, according to Cavendish, cannot be discovered by magnifying natural bodies?