Find out more
Home / Healthcare & Medicine / Biology & Biotechnology / Understanding Insulin / Why are there so many types of insulin available for use?

Why are there so many types of insulin available for use?

Insulin was first discovered in 1921 during studies conducted on dogs by Frederick Banting and Charles Best.

This resulted in the purification of insulin from bovine (cow) pancreases and commercial production and widespread use followed soon after.

It was not until 1977 that human insulin was manufactured by inserting the genes that code for human insulin into yeast and bacteria, resulting in large scale production of human insulin.

Natural human insulin circulating in the bloodstream only exists as a single molecule. It carries out its essential role in blood glucose level regulation by acting as a key, to permit glucose uptake into cells. 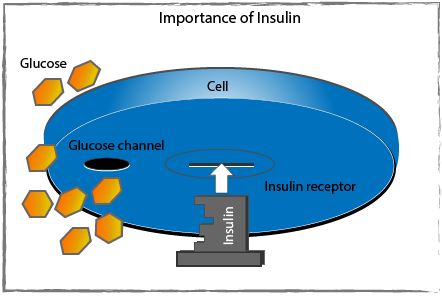 Figure: insulin acting as a ‘key’

Commercially available insulins are supplied in vials of concentrated solution. As a result, small insulin molecules cluster together to form a larger insulin molecule. After administration under the skin (subcutaneous delivery), this larger molecule needs to be broken down into smaller insulin molecules to enter the bloodstream more readily.

Influencing rate of uptake and duration of action

Over the last 20-30 years, different modifications have been made to the insulin molecule (e.g. altering amino acid sequences or types on the insulin molecule, or adding zinc or protamine) that can influence its rate of uptake into the bloodstream and also affect its duration of action on lowering blood glucose levels.

These modifications have given rise to several classes of commercially available insulin preparations, which we outline in the next step.