How does insulin control key pathways?

This article will enable you to understand the different processes that insulin controls in the healthy body.
© University of Southampton

Insulin is a powerful hormone released to reduce blood glucose concentrations. It acts to promote the storage of glucose, proteins and fats and it has actions on the liver, muscle and adipose tissue.

Actions of insulin on carbohydrates

Insulin achieves a reduction in blood glucose by stimulating glucose uptake, storage of glucose as glycogen and metabolism of glucose to ATP. 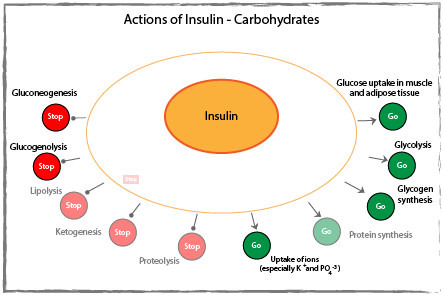 Actions of insulin on fats

Insulin also has significant effects on lipid metabolism. In the liver, insulin increases the synthesis of lipoproteins. It also reduces the rate of β-oxidation of lipids, as the rate-limiting step is inhibited by insulin.

Both these actions result in an increase in circulating lipids. Insulin also reduces ketogenesis in the liver and lipolysis in the adipose tissue, as hormone-sensitive lipase is inhibited by insulin. 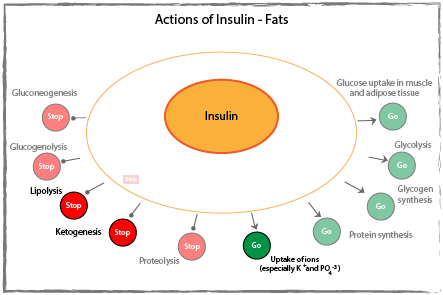 Figure: how insulin acts on fats. Full colour represents actions that are relevant to the effect of insulin on fats, whilst faded icons represent actions that do not relate to fats.

Actions of insulin on protein

Insulin promotes building up protein and inhibits the breakdown of protein.

Insulin has the following effects on protein metabolism: 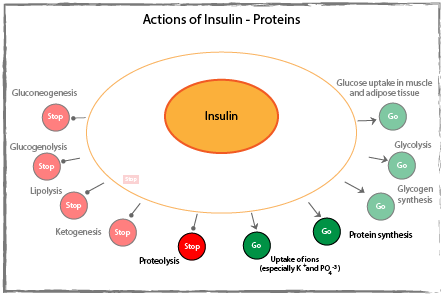 Figure: how insulin acts on protein. Full colour represents actions that are relevant to the effect of insulin on proteins, whilst faded icons represent actions that do not relate to proteins.

If you’d like to learn more about insulin, check out the full online course from the University of Southampton, below.