This article describes how Napoleon evaluated the situation, chose his strategy and moved decisively to stike a weak point in the Allied defences. 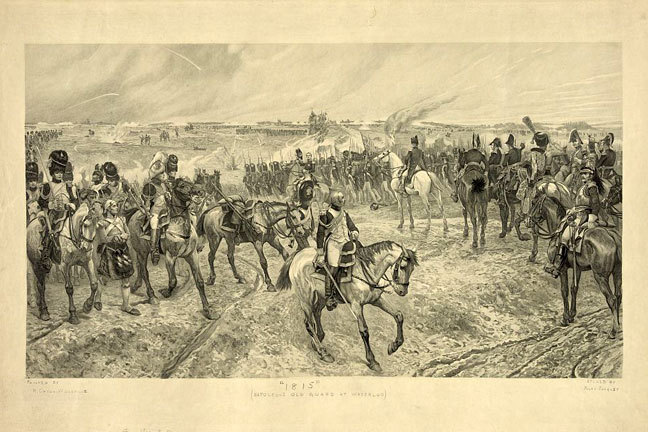 Once news reached the allies of Napoleon’s escape from Elba, they formulated plans to provide forces against what they termed their ‘common enemy’ to combat the threat he presented. In practice, that meant assembling and making dispositions for large numbers of troops — but as Wellington had confessed to Lord Stewart in 8 May, there was uncertainty about the size of Napoleon’s force, when and where the allied forces might be of most use, and how they might be employed.

For much of the Hundred Days, the forces of the allies, while they were assembling to threaten France, were essentially waiting in the best defensive positions they could so as to react to Napoleon. Intelligence was crucial, especially about Bonaparte, for it was thought certain that he would lead any attack himself. The allies needed news of the Emperor’s movements and that of the Imperial Guard, also seen as a key element in any French attack led by Napoleon. By 9 May, it was believed that there were significant French forces massed near Mons — but it became clear they were engaged in defensive measures. Wellington, leading the British, Dutch and German contingents, and Blücher, commanding the Prussian forces, met on 28 May and agreed that they might be ready to take the offensive against France from the start of July.

Defending the Low Countries
Wellington was familiar with the territory around the fortresses on the border between Belgium and France and around Waterloo, having reconnoitred the ground in 1814 en route to Paris to take up the embassy there. For him they represented the best means for the allied forces to establish their defensive line. It was in this area in Belgium, to the south of Brussels, that the allied forces found themselves cantoned in March to June 1815, awaiting battle. The choice of the battle ground itself, however, remained with whichever side adopted an offensive rather than defensive strategy. As long as Wellington and Blücher and their respective forces remained on their lines awaiting further forces and the preparations of their Austrian and Russian allies, this left open the possibility that the French could force the issue.

Napoleon’s choices
The speed with which the allies had brought their forces together had an impact on Napoleon’s choices. For Napoleon, the options were either defensive — drawing his opponents to positions near Paris and Lyons — or to make a pre-emptive strike on the allies in Belgium before further troops arrived. The first option was fraught with political problems: to accomplish it large areas of France would be overrun by invading armies, a move which would hardly attract popular support. The difficulty of the other plan for Napoleon was to ensure that he fought only one army at a time. The combined forces of the Anglo-Allied army and the Prussians would be too much for the French, but if he attacked the Prussians first he might eventually force Wellington to retreat west to the North Sea coast.

A weak point for the allies
Napoleon based his strategy on intelligence that identified a weak point in the defences of the allies in Belgium: the point of contact between the two armies was Charleroi, which not only was lightly garrisoned but also did not have fortifications. As it happened, while both Wellington and Blücher had made plans for an attack on their front, neither had done so for one on an outlying flank. Uniting their two forces on a position between their two fronts would take two to three days: the allied commanders relied on their intelligence warning them in sufficient time of an enemy build up to enable them to achieve this. Napoleon hoped to exploit their weakness and in attacking Charleroi either force Blücher to retreat so that the French might then fight Wellington or, if Blücher stayed and fought, defeat him in battle and force Wellington to flee.

Intelligence
Both sides had recourse to intelligence and there was a constant stream of information passing across the border. For Napoleon, the fact that the allies were billeted and remained in position made acquiring information a more straightforward task. The allies were at more of a disadvantage as the French border was closed and it was difficult to travel without documentation. As the British government had declared war against Napoleon and not France — the King of France was an ally — Wellington could not send patrols across the border to reconnoitre. Yet, despite this, the allies were in receipt of a range of intelligence, some useful and accurate amongst the reports of bogus deserters and other misinformation.

Napoleon makes his move
The French Emperor knew he had to proceed swiftly — and cautiously. At the start of June, he effectively restricted news about his movements and those of his forces, and spread disinformation. The Armée du Nord, some 120,000 men, was ordered on 2 June to a position near France’s north-eastern frontier. Surprisingly, there was no allied reaction. Guard units followed, piecemeal. Napoleon left Paris on 12 June at 4 o’clock in the morning — in the afternoon he was at Laon. The allies had no secure knowledge of these movements: while Wellington had intelligence, it was not accurate — he had expected Bonaparte to be at Laon on 6 June and he knew, firstly, that there were extraordinary preparations along the road that would allow troops to be moved in carriages, and, secondly that there were immense concentrations of troops in some of the towns on the road from Paris to the frontier. On 7 June Wellington gave orders for the defence of the towns of Antwerp, Ostend, Nieuwpoort, Ypres, Tournai, Ath, Mons and Ghent. Three days later, Wellington had inaccurate intelligence that Bonaparte had arrived at Maubeuge the previous day and had gone to Lille. Indeed it was not the case that the allies were unaware of the imminent attack by the French on 15 June, despite Napoleon’s efforts to keep the manoeuvres of his forces secret. The allies did not move in time because it appears that they could not quite believe the intelligence that they had received. Thus the French, at Napoleon’s exhortation, began their invasion of the Low Countries, wrong-footing the allies and starting the chain of events that culminated in the clash between the two sides at Waterloo.

Document: Napoleon’s proclamation to his troops, from the Imperial Headquarters, at Avesnes, 14 June 1815
Napoleon, by the grace of God and the constitutions of the Empire, Emperor of the French, etc., to the Grande Armée

Today is the anniversary of Marengo and Friedland, a day which has twice decided the fate of Europe. After Austerlitz, after Wagram, we were too generous! We believed the pleas and pledges of the princes we left on their thrones! Today, however, their coalition is after the independence and the most sacred rights of France. They have begun the most unjust of aggressions. Let us therefore march to meet them. Are we not still the same men?

Soldiers! At Jena, against the same Prussians, so arrogant today, you fought outnumbered three to one; and at Montmirail, six to one!

How have those among you who were prisoners of the English recounted tales of their prison hulks and the terrible evils you have suffered!

The Saxons, the Belgians, the Hanoverians, the soldiers of the Confederation of the Rhine groan at having to lend their arms to the cause of princes who are the enemies of justice and the rights of all peoples; they know that this coalition is insatiable! It has devoured 12 million Poles, 12 million Italians, 1 million Saxons, 6 million Belgians, and now it must consume the German states of the second rank.

They are mad! A moment of prosperity has blinded them. The oppression and humiliation of the French people are not in their power! If they invade France, they will find it to be their grave!

Soldiers! We have forced marches to make, battles to win, perils to face; but with constancy victory will be ours; the rights, honour and happiness of the Fatherland will be recaptured!

For all Frenchmen with heart the moment has come to overcome or to die!