This article describes correspondence (reports) from Wellington's commanders about the action taken part in by their units during the Battle of Waterloo. 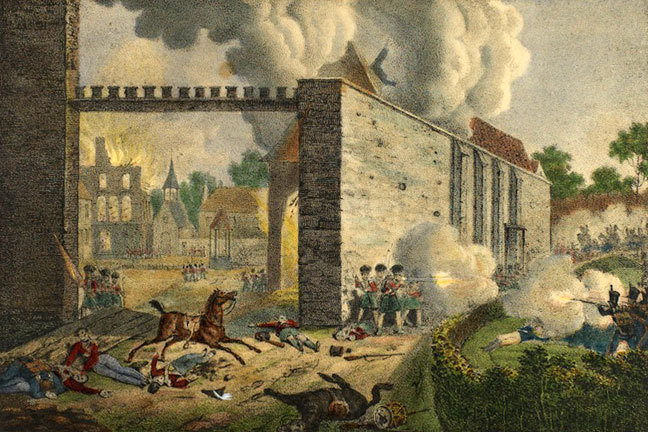 Wellington’s Waterloo Despatch was the official account of the battle and, as we have seen, was sent to England to the Secretary of State on 19 June. The Duke, however, needed supporting materials on which to base his account and subsequent communications. The most important of these came from his divisional commanders — and they were written in the same way as Wellington wrote his own despatch, to the same unwritten rules and largely to the same structure. This was an official record, composed on 19 June and the following days as the army moved forward. These accounts contain more detailed descriptions of the action than the Waterloo Despatch, and reveal important points about the work of 18 June.Document 1: Lieutenant General Carl von Alten wrote to Wellington the day after Waterloo on the conduct of the 3rd Division, which had been positioned in the centre of Wellington’s forces, including the defence of the farm at La Haye Sainte.Document 2: Sir James Kempt gave a report on the 5th Division, enclosing also a report that had been made to him from Major General Sir John Lambert describing the activities of the 10th brigade of infantry.Document 3: Lieutenant General Lord Hill sent in a report on 20 June about the activities of the 2nd Division, which Wellington had himself witnessed, enclosing a report from Lieutenant General Sir Henry Clinton (who in turn enclosed one from Major General Adam)Activity
Battle is a confused and confusing event. You might like to try to follow the reports of these troop movements using the map of Waterloo you downloaded in step 2.2. Is it possible to do the same with the soldiers’ voices recorded in their memoirs in step 2.4?Formation of the troops
Von Alten takes us through the day, describing the formation of his troops — in columns, ready to deploy into line, or as squares, to protect infantry against cavalry. Sir James Kempt sets out the composition of the main lines of battle, and the sequence of the main elements of the action that his division saw, the work of Sir John Lambert’s brigade. What is also apparent from these reports is the way in which Wellington’s army was composed — beyond British forces — of Hanoverian, Dutch and Belgian troops, as well as of contingents from various German towns and states, and how inexperienced some of these troops were. The 4th and 5th Hanoverian brigades, for example, were made up of young militia soldiers. The 2nd Division, under Hill and Clinton, included the battalion from Osnabrück and other battalions from elsewhere in Lower Saxony — Salzgitter, Bremervörde and Quakenbrück.

View Course
Glimpses of Napoleon’s forces and their tactics
Kempt notes how the enemy concealed his attack until the last moment, and then advanced rapidly in three immense columns of infantry, covered by artillery; von Alten notes the impact of enemy artillery on the 3rd Division, the different types of shot used, and the steadfastness of his troops under fire; Kempt describes how it was impossible for Lambert to retake La Haye Sainte, as his infantry were in squares surrounded by enemy cavalry — and the prolonged exchanges of fire that ensued. The reports are hard to place together overall: there are few references to timing — von Alten talks of the part of the action continuing ‘for several hours’, and Sir James Kempt in one place says simply ‘The struggle at this point continued for some hours, but every effort of the enemy proved ineffectual …’ On the whole, however, each officer provides a good sense of the tactics that were employed in his section of the battlefield. Later discussions of the battle were to focus on the question of sequencing what had happened overall. Lord Hill, in 1830, as commander in chief of the army, commissioned William Siborne to establish what officers could recollect of their whereabouts at particular points in the day, especially at the crux of the battle, at about 7 p.m.Recognition of the service of the allied forces
Like Wellington’s despatch, the authors of these reports are careful to mention their supporting staff, the succession of officers to command as a result of casualties — right from the most senior officers, Lieutenant General Sir Thomas Picton’s death resulting in Kempt taking command of the 5th Division. Some of the concluding passages make recommendations for promotion or distinction based on the valour and commitment of the troops, a point which the next section will discuss further.Document 1: Report from Lieutenant General Carl von Alten, Brussels, to Field Marshal Arthur Wellesley, first Duke of Wellington, on the conduct of the 3rd Division at the battle of Waterloo, 19 June 1815 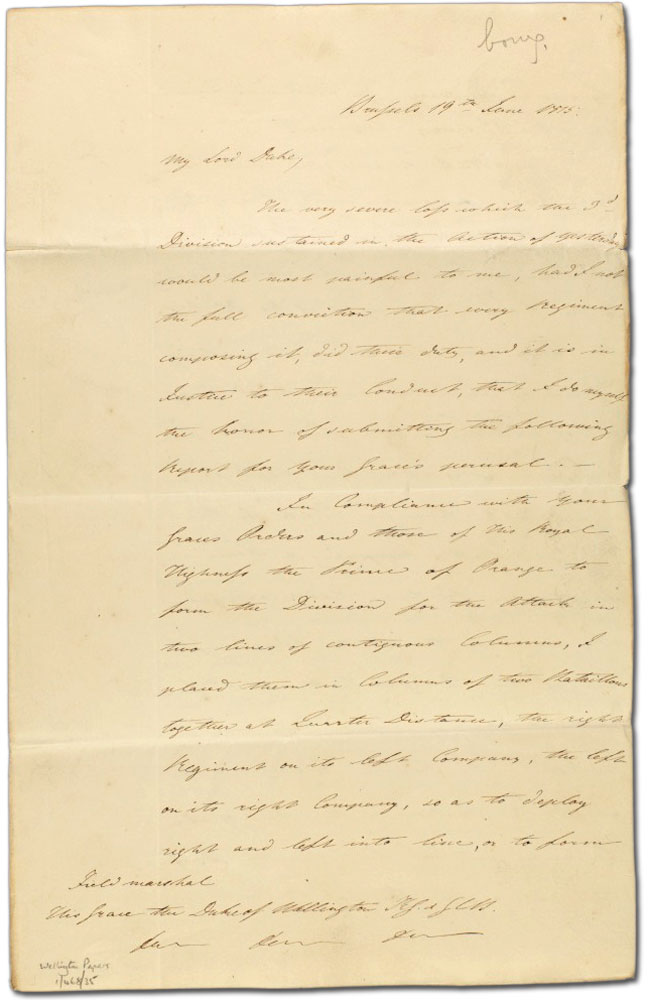