Memoirs of the Battle of Waterloo

This article describes the wealth of published memoirs and other popular accounts of the Battle of Waterloo. 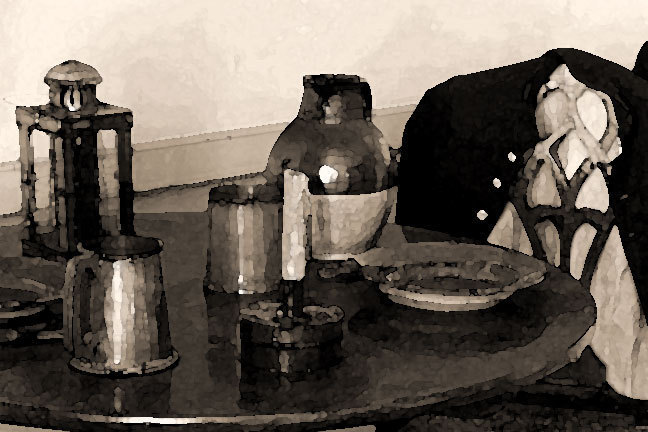 How the Battle of Waterloo was described in official communications are far from the only records of the engagement that we have. Soldiers kept journals, made notes and memoranda about what they saw and the actions in which they were engaged.

They wrote home about battles and their surrounding events — the other ranks in the British army had preferential postal rates, penny postage, from 1795, although the motivation for this concession had been to save the trouble and loss of revenue from redirected letters, rather than any intention of encouraging correspondence among the forces. And then there were bystanders, other witnesses to the events in the Low Countries in 1815, and tourists to the battlefield. Some of these drew on official accounts, interweaving with them the more personal reflections of travellers, and especially accounts of their hardships. The battle was therefore followed by the publication of a series of ‘authentic accounts’ and ‘relations’, in English, French and other European languages — the forces engaged were cosmopolitan — and by memoirs, journals and collections of correspondence. These give us very different views of the event and it is worth understanding what these sources represent.

While correspondence can be dated fairly readily, journals and memoirs offered more scope for rewriting for publication, and their contribution may tell us more about the cultural significance of the battle than of the events of 18 June itself. From the start of the seventeenth century, memoirs of war had been popular texts. With the spread of literacy and the wider availability of printing technology, however, the late eighteenth and early nineteenth centuries were to see an unparalleled flourishing of the genre. Military memoirs of this date were different to earlier examples, with a new emphasis on personal experience of the horrors of war — although elements of impersonal narrative remained.

What should historians consider when using memoirs?
These documents need to be approached with a sense of criticism, to establish who wrote the memoir, their rank, where and when they saw service — that is, whether they were in fact witnesses to the events described. Equally, it was not uncommon for officers to assist in the preparation of their soldiers’ memoirs for publication. Texts may have been edited and abridged; and there is also a question of plausibility, for example, in the dialogue that some of these texts include. It is also important to establish when the text written and when it was brought to publication: there are questions here about how memory was formed, when it was recorded, and whether it had been influenced by the earlier publication of other memoirs. These memoirs came to publication throughout the nineteenth century, but there were clusters, for example, around the death of the Duke of Wellington in 1852.

The journal of ‘Thomas Howell’

The wars against Napoleon were remarkable for the numbers of accounts that appeared that were authored by soldiers from the rank and file. One early publication ostensibly by an ordinary soldier was the Journal of a soldier of the Seventy-First, or Glasgow Regiment, Highland Light Infantry, published anonymously in 1819 in Edinburgh. But the question is, which ordinary soldier? The printed text suggests the author was one Thomas Howell, and that the editor, who prepared the book for publication, was his relation, a writer by the name of John Howell. The Royal Highland Fusiliers, however, have a copy of the third edition of the book in which John Howell has noted that one James Todd was the individual who supplied most of the text. The work is now believed to be a compilation based on the memoirs of up to three soldiers: the muster rolls for the regiment make it impossible for James Todd (or, indeed, Thomas Howell) to have been the soldier behind all sections of the account. We need, therefore, to consider critically the preliminary ‘advertisement’ to the reader that the publisher supplied, along with other mentions of Howell’s personal circumstances:

The publishers have taken pains to ascertain the accuracy of the statements in the following Journal, and the result has confirmed them in the belief, that the writer of it has related nothing but what passed under his own observation. His education sufficiently accounts for his expressing himself better than could have been expected from a private soldier. No alteration has been made upon his language, farther than the correction of a few of the more obvious verbal inaccuracies.

The editor of the volume

Characteristics of Thomas Howell’s account
Howell’s account of Waterloo is largely devoid of notions of romanticism that are to be found in many of the more popular publications — but it is, that notwithstanding, an expression of personal experience and was a precursor of many examples of the genre. It was composed some while after the battle itself. Howell notes how the night after the battle his dreams were confused recollections of the events of the day and how, the following morning, he began to talk with his comrades about what had happened. This process served to create and fix a form of communal memory of the event — which Howell was later to set down. He points to the hardships of soldiering, the marching, continued exposure to the elements, the lack of opportunities for eating properly, and the exhaustion of the long days in the period of the battle. His narrative is punctuated by anecdote — the young soldier who has a premonition that he will die, along with the account of his death (the deaths of close comrades and their final words are often a feature of these works); glimpses of the generals, of Lord Hill on reconnaissance early on the morning of 18 June, of the Duke of Wellington riding into a square of the 71st while enemy cavalry attack, and the words of encouragement of General Barnes. There is humour as well as, but also a numbness, almost indifference, at the scale of the killing: the preface to the 1822 edition deliberately set out to point up the Journal’s value as a corrective to the glorification of war. At times Howell’s perspective of the battle was limited physically by the smoke of the action — and he was also struck by the noise, much more so than in his earlier experiences of warfare. The account is comparatively well ordered, with some indications of the time of day, for example, falling in to prepare to attack at noon, lying down under fire for about an hour and a half. While the writing and the dialogues are not typical of the common soldier — individuals who commonly merited little more than the contempt of their contemporaries — the experience of Waterloo was something of wide importance. It was presented here in ways that would have made it acceptable to a wider reading public, such as the dying young soldier who makes a suitable Christian reference and acknowledges his parents and his evils.

The text recounts that Thomas Howell’s Journal was brought to press through the intervention of a childhood friend, a bookbinder, who had found Thomas in distressed circumstances and had suggested that he write his account as a way of relieving his poverty. The memoir was very successful: some 3,000 copies had been sold by the time a third edition was printed in 1822, and was well reviewed in the literary press. It inspired an interest, albeit a sentimental one, in the hardships of the common soldier, and reviewers acknowledged its importance in comparison to publications that focused on the professional details of campaigns.

An instructive comparison can be made with the account of Waterloo in John Kincaid’s Adventures in the Rifle Brigade in the Peninsula, France and the Netherlands, from 1809 to 1815, first published in London in 1830, with subsequent editions in 1838 and 1847. John Kincaid joined the Rifles as a volunteer from the militia and had become lieutenant by the time of Waterloo. Promoted to captain in 1826, his Adventures in the Rifle Brigade was written close to his retirement in 1831. Kincaid also published a second book, Random shots from a rifleman, in 1835, with a further edition in 1847. He told readers of the latter work that, ‘Like its predecessor, this volume is drawn solely from memory, and of course open to error; but of this my readers may feel assured, that it is free from romance; for even in the few soldiers’ yarns which I have thought fit to introduce, the leading features are facts.’ If there are comparatively few memoirs of private soldiers, it is striking that we have a cluster from the Rifle Brigade, as well as memoirs of officers from this formation — military memoirs are not distributed evenly across the army and we know much more about the experience of some formations, such as the Rifle Brigade and the wider Light Division. 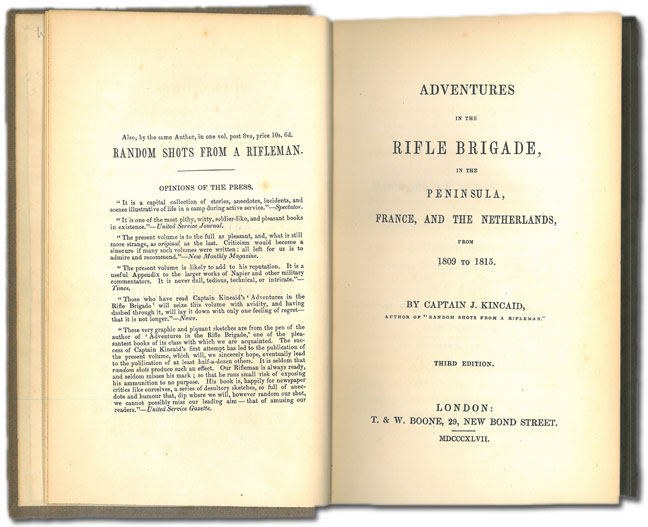 Characteristics of Kincaid’s account
Kincaid’s account of Waterloo unfolds in a careful timed sequence, which serves to structure the narrative. He describes the preparations for the day, the sending of the baggage to the rear, his location at La Haye Sainte and the other troops around, in the left centre of the battlefield. He gives a thoughtful account of the disposition of the forces and the immediate topography; he catches a glimpse of Napoleon and describes the advance — and noise — of the advance of the French troops towards his position. There may not be romantic yarns, but he does include anecdotes; and we should bear in mind the words of the Preface to Random shots of a Rifleman — ‘the leading features are facts’ — that is, this is a literary account and may not be relied upon exactly in all its details. It also contains reflections on the battle: ‘If Lord Wellington had been at the head of his old Peninsula army, I am confident that he would have swept his opponents off the face of the earth immediately after their first attack; but with such a heterogeneous mixture under his command, he was obliged to submit to a longer day.’ While he believed that Wellington would not have fought at Waterloo unless Blücher had promised to bring substantial Prussian forces to the fight, he still asserted that Wellington would have defeated Napoleon even if the Prussians had not arrived.

You will have heard part of Kincaid’s account of Waterloo in the step ‘Soldiers’ voices’.