This article describes the re-establishment of the Bourbon monarchy in France with Louis XVIII following defeat at the Battle of Waterloo. 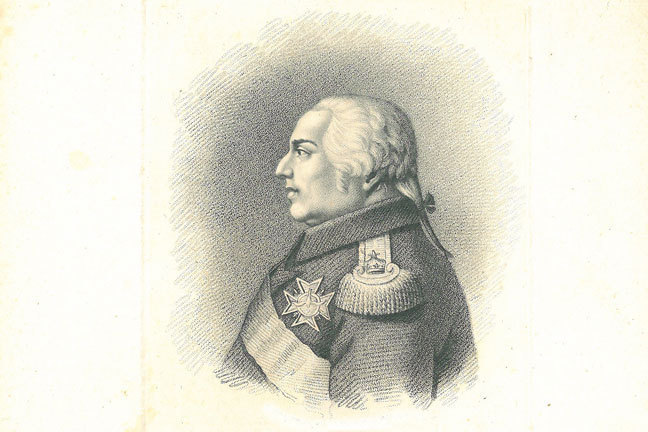 The revolutionaries of 1792 had intended that by abolishing the monarchy — and by guillotining Louis XVI early the following year — the rule of France by the Bourbon family would come to an end. Members of the family escaped, however. Among these was the brother of Louis XVI, the Comte de Provence, known as Louis XVIII after the death of the guillotined king’s 10-year-old son, Louis (XVII), in a Paris prison in June 1795.

Louis XVIII
Louis XVIII (1755–1824) had escaped to Coblenz in 1791, and he spent the years until 1814 in exile. Isolated, and comparatively poor, he moved where he might, not always clear whom he could trust. There were attempts on his life, instigated by the French government, and he was a political pawn or a potential embarrassment for his hosts. From 1798, he accepted Russian hospitality and based himself at Mittau (now Jelgava, in Latvia). Louis XVIII expected to be restored to the French throne as the legitimate king: from 1795, therefore, how that might achieved and what might be the basis for and the politics of his government were important questions. Royalist uprisings in France had little success, however.

Louis XVIII decided in early 1806 that a move to England would bring him closer both to France and to the active opponents of Bonaparte — from the British government to the French royalist agents that were active in London. The Treaty of Tilsit in June 1807, which created an alliance between Russia and France, made a move from Russian-controlled territory inevitable — but Louis’ arrival in England was not welcome news. The British government kept him at sea off Yarmouth for five days, before it was agreed that he might land — on condition that he called himself the Comte de l’Isle and did not go within 50 miles of London. Two Foreign Office officials, who were sent, belatedly, to meet him, studiously avoided calling him the King of France (although they styled him His Most Christian Majesty and Louis XVIII).

What was Louis’s significance in exile?
But the British government had misjudged the strength of Louis’ position: as King of France he had a political significance far beyond that of other exiles. Louis was given a generous pension by the British government and could effectively go wherever he pleased: from 1809, he resided at Hartwell House, near Aylesbury. Two years later, when the Prince of Wales became the Prince Regent, Louis XVIII and all his entourage were invited to the celebrations to mark the start of the regency — and thereafter there was regular contact between the Prince Regent, the British royal family and the Bourbons, founded on a mutual hatred of Napoleon.

It was not only in England that Louis was beginning to attract support. Napoleon’s regime was not popular among all in France, and some came to believe that France under Louis might prove more liberal and less reactionary. Louis had grown in stature in exile. Even former revolutionaries began to favour a Bourbon restoration. In 1812–14, some parts of France became notably pro-royalist — the south-west and the area around Bordeaux in particular. The timing of a restoration was complex, however: the allied powers did not want to forego the possibility of bringing the wars to a close by making peace with Napoleon. At the start of 1814, three of the Bourbon princes — Louis’ brother the Comte d’Artois (later Charles X of France) and his sons, the Duc de Berri and the Duc d’Angoulême went to France in great secrecy — but their reception was not enthusiastic. What was lacking was an allied declaration in their support. The balance was tipped in the south-west. The Duc d’Angoulême was a moderate, his wife was the daughter of Louis XVI (and his cousin), and he was with an army in France — Wellington’s — which paid its way. Some smaller towns declared for the Bourbons, followed on 12 March 1814 by Bordeaux. Over the next month, all over France, towns were to declare for the king. In the wake of Napoleon’s abdication, the French senate proclaimed Louis XVIII King of the French, provided he accepted their constitution.

The return of the king
Louis XVIII returned to France on 24 April, with the support of the elite and with comparatively little opposition from groups such as the mob in Paris. But the return was not unproblematic. The resources of the French crown were seriously depleted, and it was a feature of both the restoration of 1814 and the return of the King in July 1815 that major loans had to be advanced: in April 1814, the British government provided a loan of £100,000, and further funds were advanced by the Rothschilds. The rapidity with which support for the Crown melted with the return of Napoleon was indicative of the fragility of Louis’ position. While the restoration of the monarchy was popular in some parts of France — the terrors of the Revolution had an impact on the attractiveness of republicanism — many were opposed or ambivalent. The monarchy was to remain vulnerable, not only in 1814–15, but in the longer term too. Repressive measures were needed in 1820 to ensure the position of the Crown. There were to be further revolutions in 1830 and 1848; after several attempted coups d’état, Napoleon’s nephew, Louis-Napoleon Bonaparte, later Napoleon III, was elected president of the Second Republic in 1848 — and no Bourbon was again to return to the throne of France.