This article describes the painting 'Chelsea Pensioners' by Sir David Wilkie, commissioned by Wellington to commemorate the Battle of Waterloo. 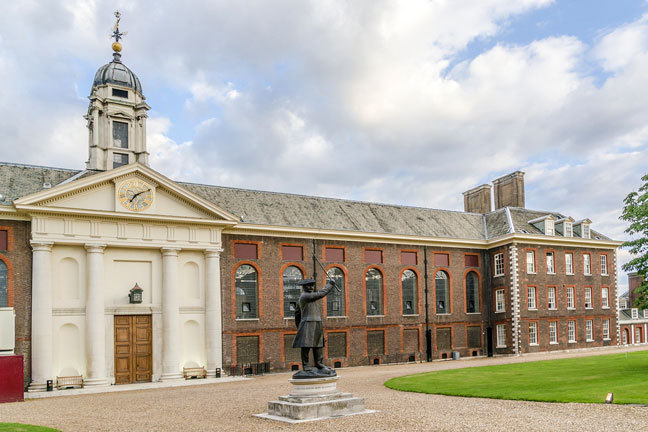 In 1816 the Duke of Wellington commissioned Sir David Wilkie (1785–1841) to paint a picture to commemorate the Battle of Waterloo. The Scottish painter had trained in Edinburgh and moved to London in 1805. Strongly influenced in technique and subject matter by seventeenth-century Dutch artists, Wilkie’s paintings were renowned for the lively incidents that they contained.

His Chelsea Pensioners Reading the Gazette of the Battle of Waterloo, was a very different image from other commemorations of the war. It was to make a link to veteran soldiers, the Chelsea Pensioners of the title — all of whom had been invalided out of the service. The painting, which was completed in 1822, was to prove very popular with the public. When it was shown at the Royal Academy in London a rail had to be erected in front of it to protect it from the crowds. Why was it to prove so popular?

What does the painting show?
The painting captures a moment of exhilaration and joy at the news of the battle. The pensioners are drinking loyally outside the Duke of York public house (named after the commander in chief of the army). They have just received, from the cavalryman — an orderly of the Marquess of Anglesey’s Lancers — the London Gazette Extraordinary of 22 June, which included the Waterloo Despatch.

The inclusion of the cavalryman gives the impression of the news having arrived post-haste, much as Wellington’s aide de camp, Major Percy, had carried the official despatch from Brussels to the Secretary of State in London. As the central figure reads the despatch aloud (it was common practice for letters and newspapers to be read out to groups), dogs bark, handkerchiefs are waved and a baby is hoisted up to see the scene, the mother anxious to hear of the father’s regiment.

In its figures, the painting makes a direct link to Britain’s wars over the preceding 50 years. The pensioner who reads out the despatch had fought with Wolfe at Quebec; a sergeant from the 42nd Foot, had fought in the Peninsular War at Barossa; and there is a link to the Revolutionary Wars in the person of the black soldier — who had become a musician in the 1st Foot Guards. In notes composed for the first exhibition of the painting at the Royal Academy, Wilkie describes this soldier as ‘…one of the band of the 1st Regiment of Foot Guards, who was in France during the Revolution; was present at the death of Louis XVI, and was afterwards servant to General Moreau, in his campaigns in Germany …’

Wilkie’s encapsulation of national pride and joy at victory, in which the battle is represented only indirectly, differs from the depictions of heroism or military achievements on the battlefield that characterise other paintings of Waterloo, such as J. M. W. Turner’s The Field of Waterloo. Exhibited in 1818, Turner imagines the battlefield on the night of 18 June, and shows a landscape strewn with corpses. Wilkie’s men have served, they are veterans; we know they are heroes; we do not need to see the field of battle, but know that is where they have been wounded.

The evolution of the painting
The painting the Duke commissioned now hangs at Apsley House. There are many sketches surviving (at least 80), and Wilkie may also have worked with clay models to help set out the figures. From some of these sketches and other information we can trace the painting’s evolution. For example, in 1816 the Duke had told Wilkie ‘that the subject should be a parcel of old soldiers assembled together on their seats at the door of a public-house chewing tobacco and talking over their old stories. He thought that they might be in any uniform, and that it should be at some public-house in the King’s Road, Chelsea.’ Wilkie thought there should be some incident to connect them, perhaps reading a newspaper. He proposed to send Wellington sketches, so that ideas might develop. That the central theme would be reading of the Waterloo Despatch appears to have been fixed upon at Wilkie’s suggestion, by at least February 1821.

An early working of the composition, also in oils, is in the Royal Hospital, Chelsea — there are fewer figures, and their positioning is less dramatic and animated; the final painting has a tighter focus on the central table and the activity there. An engraving of the painting was published in 1831. The Duke commissioned a second painting, by John Burnet, known originally as ‘Greenwich Hospital and the naval heroes’, but now more generally known as Greenwich Pensioners commemorating the Battle of Trafalgar — which was completed in 1837, and which was intended to hang with the Wilkie.

Wellington as a collector and patron of art
For all that Wellington complained of the demands painters made upon him, he was sympathetic to the medium. The Waterloo Gallery at Apsley House was a fine place to show his collection. Beyond the material that had come from Spanish royal picture collection and his interest in Old Masters, about a third of the pictures were the Duke’s own commissions, mainly portraits of his comrades in arms or statesmen and sovereigns of the day, but with some other, major pictures from contemporary artists. The most expensive of the Duke’s own commissions was Wilkie’s Chelsea Pensioners — the Duke paid Wilkie 1200 guineas, in cash, on the painting’s completion. Wilkie was working in a style that called to mind the seventeenth-century Dutch painters whom Wellington much admired.

The Waterloo Gallery at Windsor
But it was not only Wellington who had a gallery dedicated to Waterloo. George IV had planned to build a Waterloo Gallery at Windsor, but it did not take shape until the 1830s, under William IV. It was to be hung with a series of magnificent portraits of the military commanders and statesmen most closely associated with the defeat of Napoleon. The first of these portraits had been begun by Sir Thomas Lawrence as early as 1814 — and Lawrence was to travel around Europe in 1818–20 to complete the sequence. The room was completed as part of the remodelling of the State Apartments at Windsor, providing an impressive space for formal state visits and receptions from the reign of Victoria onwards. Waterloo was a potent evocation of national memory and Britishness.