Achilles and the ladies of England

This article describes the controversial statue of Achilles erected in Hyde Park in 1822 as a monument to the Duke of Wellington. 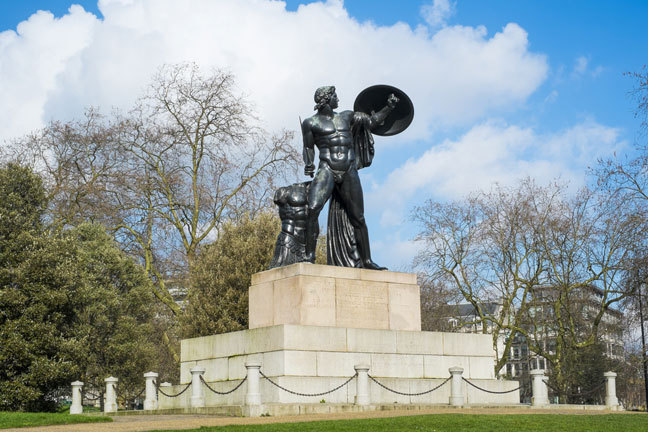 In the period after Waterloo, there were many proposals for monuments to the Duke of Wellington, most of which did not come to fruition. The nation’s gratitude to Wellington had been demonstrated by grants of £400,000 from Parliament to construct for him a grand Waterloo Palace.

Between 1814 and 1819, the Royal Academy exhibitions included drawings of ideas for the palace and for other monuments to Waterloo, the Duke and the men who had served with him and died in the service of their country. The extravagant designs for the palace were too costly and the Duke used the funds to purchase a more modest estate at Stratfield Saye — and a Waterloo Gallery was added to his London residence, Apsley House.

Some of the public monuments were much more than commemorative, aiming to reflect high art and to unite the public in an expression of patriotism. It had been intended that there should be a National Waterloo Monument, close to Regent’s Park, or near the Royal Mews (roughly to the north of what is now Trafalgar Square), to parallel a proposal for a naval monument at Greenwich. These plans, however, were to be transformed into the Marble Arch, which was located — in the first instance — as an entry to Buckingham Palace.

A mark of patriotism
In London, there was, however, a significant ‘national’ commemorative piece of art. Standing in Hyde Park, close to Apsley House, this was a colossal statue of Achilles, the tribute of the Ladies of England, a mark of the patriotism of the nation’s women. The statue was destined for immediate controversy, as in 1822 it was London’s first public nude statue. Achilles stands some 18 feet high: the statue is cast from enemy cannon captured at the Battles of Salamanca (1812), Vitoria (1813), Toulouse (1814) and Waterloo. It is the work of Sir Richard Westmacott (1775–1856), an enthusiast for Ancient Greece. Westmacott’s Achilles was based on an antique statue at Monte Cavallo and was cast in his foundry at Pimlico. It may have been that the original location for the statue was to be Horse Guards’ Parade, or close to it; but Hyde Park, near to Wellington’s house, became the site.

Why was the statue problematic?
Firstly, there was doubt among some members of the public at least whether the figure was intended to be Alexander the Great, rather than Achilles — perhaps an understandable confusion, as it was not entirely clear why it had been named after Achilles, despite his classical military renown. There may have been a connection, in inspiration, to the Achilles’ Shield sculpted by John Flaxman (1755–1826), made for George IV in 1821 — the Wellington Shield of 1822, by Thomas Stothard (1755–1834), had many similarities to it. Achilles’ shield, in classical mythology, was created for him by the gods and was of fantastic potential.

Secondly, contemporary notions of heroism and bravery did not sit well with those of classical art, and especially those that saw ancient dress or ‘timeless nudity’ as a crucial element in the composition. By 1821, it was apparent that the nudity provided scope for misinterpretation, for scurrility. Lord Spencer, whose wife headed the list of subscribers to the monument, wrote to the Committee of Taste, responsible for the selection of public works of art: a fig leaf was required, especially as this monument was the tribute of the Ladies of England — decency and decorum were essential.

Nobody was fooled. George Cruikshank lampooned the statue in 1822, in his Backside & front view of the ladies fancy-man, Paddy Carey, noting additionally that it was erected in Hyde Park, ‘in honor of the “Waterloo Man” & his soger men’, ‘supposed to be erected by his country women for the relief of his starving country men’. Here Cruikshank had hit a nerve. Wellington was a member of the government at this time: how appropriate was it that resources, public or private, should be devoted to projects like this in a time of distress?