The Battle of Waterloo in Thackeray’s Vanity Fair

This article describes the novel Vanity Fair by William Thackeray, published in 1848 and set at the time of the Battle of Waterloo. 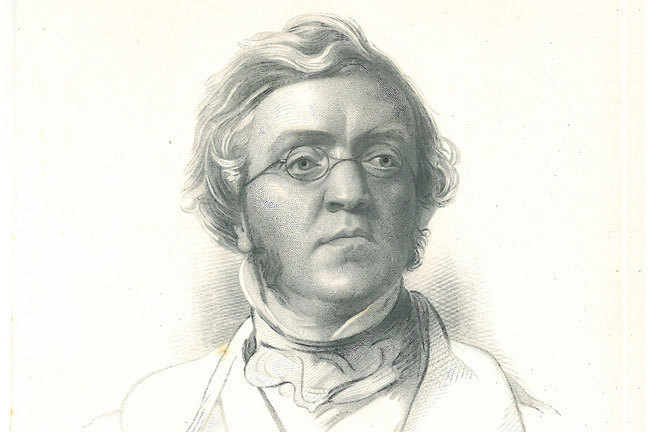 William Makepeace Thackeray (1811–63) was born in Calcutta to Anglo-Indian parents. He came to Britain in 1817 to attend school and then spent two years at Cambridge. Thackeray studied art before turning to writing as a living. He began to make his reputation in the 1840s through his writings for Punch. Vanity Fair was his first major novel.

A novel without a hero
First published in monthly parts over 1847–8, and then as a single volume in 1848, Vanity Fair: a novel without a hero, traces the interwoven destinies of two very different heroines during the period of Waterloo and its aftermath. The orphaned Becky Sharp is resourceful and socially ambitious, whilst her school friend Amelia Sedley is trusting and unworldly. As the war clouds gather, the main characters move with their soldier husbands and the British army to Brussels. George Osborne, Amelia’s husband dies in the Battle of Waterloo, although we learn nothing more about his death. The novel is filled with references to the battle, yet the action remains off-stage. Thackeray had created a novel without a hero, leaving readers to provide their own interpretation of the action.

Commemoration and the 1840s
Since it first appeared, there has been speculation over how much the novel was about 1815 and how much it was about the 1840s. At the time it was written, there were public debates about the ways in which war heroes might be honoured and commemorated. There was public controversy over the equestrian statue of the Duke of Wellington, mounted on the Wellington Arch, opposite Apsley House. 1847 also saw the issue of a military general service medal for all ranks in the British army who had taken part in the Peninsular War — at least, for those that had survived until this point and who made application for it. The conflicts of the Napoleonic Wars were thus still very much in public consciousness and continued to have a place in helping define a sense of British national identity and an evocation of national pride.

1848 was also remarkable as a year of revolutions and uprisings across Europe: the government of France was one of those to be overthrown. Faced with the spectre of a challenge to the European status quo, it is not hard to see how the concerns of the 1840s became blended with those of 1815. Reviewers of the novel in 1848 saw both the contemporaneity and universality of the story as a romanticised history of Britain. As Abraham Hayward noted in his review of the book in the Edinburgh Review of January 1848, it harked back to a time when ‘the war fever was at its height: Napoleon was regarded as an actual monster: [and] the belief that one Englishman could beat two Frenchmen, and ought to do it whenever he had the opportunity, was universal …’

How did Thackeray treat Waterloo?
Thackeray treats Waterloo as a historical narrative revisited and revised through a prism of patriotism. Yet the contemporary resonances of the battle and the leaders of the opposing armies were also apparent: connections between imperialism and competition, war and profit, and war and social advancement were as meaningful in the context of the 1840s as in 1815. Wellington was an elder statesman of the Tory party and its leader in the House of Lords in the 1840s. He was still a figure in whom the nation could place its hope, just as the Wellington evoked in the novel was one in whom ‘everyone had such a perfect feeling of confidence’.

Thackeray’s depiction of the battle is nevertheless not romantic. The character who becomes the main authority on the battle is Jos Sedley, Amelia’s brother, who, as a civilian, does not set foot on the battlefield and spends most of the time during the engagement getting ready to flee Brussels, abandoning his sister as he goes. The devastation of close combat warfare — the fury of the fighting, the terrible damage wrought by artillery ‘ploughing up their ranks’, the comradeship and loss as men fell and ‘resolute survivors’ closed in — are described in a few eloquent sentences. From these lines the reader also learns of the tactics of close action in the battle, the formation of British infantry in their squares, which worked so effectively against French cavalry charges, and the last desperate push by the elite Imperial Guards of the French army before the balance of the action turned and the battle was lost to Napoleon.

All that day from morning until past sunset the cannon never ceased to roar. It was dark when the cannonading stopped all of a sudden.

All of us have read what occurred during that interval. The tale is in every Englishman’s mouth; and you and I, who were children when the great battle was won and lost, are never tired of hearing and recounting the history of that famous action. Its remembrance rankles still in the bosoms of millions of the countrymen of those brave men who lost the day. They pant for an opportunity of revenging that humiliation; and if a contest, ending in a victory on their part, should ensure, elating them in their turn, and leaving its cursed legacy of hatred and rage behind to us, there is no end to the so-called glory and shame, and to the alternations of successful and unsuccessful murder, in which two high- spirited nations might engage. Centuries hence, we Frenchmen and Englishmen might be boasting and killing each other still, carrying out bravely the Devil’s code of honour.

All our friends took their share and fought like men in the great field. All day long, while the women were praying 10 miles away, the line of the dauntless English infantry were receiving and repelling the furious charges of the French horsemen. Guns which were heard at Brussels were ploughing up their ranks, and comrades falling, and the resolute survivors closing in. Toward evening, the attack of the French, repeated and resisted so bravely, slackened in its fury. They had other foes besides the British to engage, or were preparing for a final onset. It came at last: the columns of the Imperial Guard marched up the hill of Saint Jean, at length and at once to sweep the English from the height which they had maintained all day, and spite of all: unscared by the thunder of the artillery, which hurled death from the English line — the dark rolling column pressed on and up the hill. It seemed almost to crest the eminence, when it began to waver and falter. Then it stopped, still facing the shot. Then at last the English troops rushed from the post from which no enemy had been able to dislodge them, and the Guard turned and fled.

No more firing was heard at Brussels — the pursuit rolled miles away. Darkness came down on the field and city; and Amelia was praying for George, who was lying on his face, dead, with a bullet through his heart.