Gurwood’s Dispatches of Field Marshal, the Duke of Wellington

This article describes the 12 volumes of the Duke of Wellington's correspondence edited by Lieutenant Colonel John Gurwood. 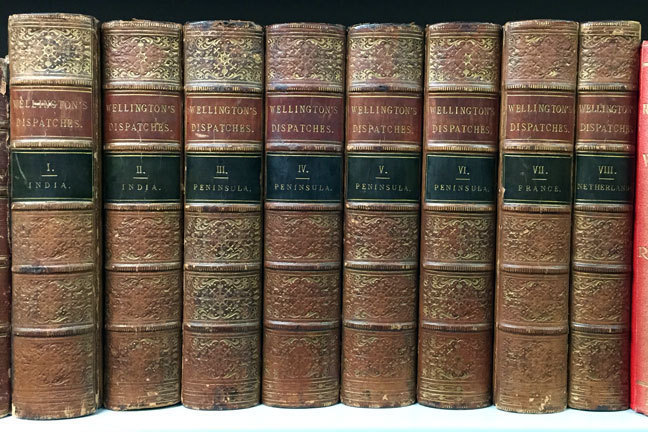 The Duke carefully refrained from expressing an opinion upon these publications. It was at this point that Lieutenant Colonel John Gurwood (1790–1845) appeared with a proposal to produce an edition — that is, to print the text — of Wellington’s General Orders. The General Orders were the instructions that the Duke had issued for the army, both in the Peninsula and in the Waterloo campaign, and which had established what was effectively a set of standing instructions of great detail, to regularise the conduct of the army on campaign.

Gurwood may have been known to the Duke before he corresponded with him about the General Orders: he had served in the Peninsula and had been in the forlorn hope (the first party into the breach in the walls, who were unlikely to survive) at the storming of Ciudad Rodrigo in 1812. In 1827, Gurwood was posted to the West Indies and took with him the orders he had from the Peninsular War. On his return to England in 1830, he wrote to Wellington once he had prepared the text for publication, seeking the Duke’s sanction. This was easily given: it involved Wellington in only minor work and the Duke knew the orders contained much on discipline, which would be useful in all sorts of circumstances.

The publication of the General Orders in 1832 had a striking effect on the Duke. That September, he was at Woodford, the home of his friends Charles and Harriet Arbuthnot, for Mrs Arbuthnot’s birthday. Charles Arbuthnot was able to tell Gurwood, that the Duke of Wellington ‘has taken the greatest interest in your book. He was so delighted with reading his old orders that he did nothing else all yesterday but read them aloud.’

What were the Dispatches?
Gurwood was able to follow up the General Orders with a proposal for a remarkable publication, an edition of Wellington’s despatches, that is, his official reports and correspondence. These had been written by the Duke partly in anticipation of official publication in the course of normal business, for example, in Parliament or the London Gazette. Gradually the scope was broadened to include other material that Wellington had written or had in his possession that had not been previously printed. The aim was that the correspondence would speak for itself. As the Duke told Gurwood:

I think that the character of your work is one compiled from publick or official documents that you could obtain. It would not answer for you in your work nor should I like that you should make any correction of other people’s statements founded upon any statement of mine from recollection.

The authority of the Duke’s writing at the time was to be crucial. Over the course of the years 1834 to 1839, Gurwood produced 12 volumes of the Duke’s correspondence and a further, index volume — known to posterity as the Wellington Dispatches — they are best consulted in their revised edition, J. Gurwood, ed., The dispatches of Field Marshal the Duke of Wellington, KG, during the various campaigns … from 1799 to 1818 (13 vols., new edition, London, 1837–9).

Problems of the project
While the publication of the material relating to Wellington’s campaigns in India was relatively uncontroversial, difficulties arose as the project came to the Peninsular War. Wellington himself had been Foreign Secretary in 1834–5 and there was civil war in Spain at this point. There were sensitivities that nearly derailed the project. As the Duke wrote to Gurwood: ‘I am afraid that the examination of these papers will leave many statues without pedestals.’ Caution was exercised and a way through to publication was found, excising some names and passages from the text.

Gurwood was an inexperienced editor and by 1837 it had been necessary to issue a revised edition of the first volumes of the work, with the material arranged differently after new items had come to light. That notwithstanding, this was to be a large-scale publication of enduring significance. It was also a ground-breaking exercise: no other general or politician at this point had personally published their papers on this scale — the only individual who came close was Wellington’s older brother, Richard, who had five volumes of his Indian papers published in 1836–7, with further material relating to his embassy to Spain in 1809 appearing in 1838. At the same time it was an effective monument to Wellington’s generalship, showing the detail and depth of skill in his work. It was an impressive counter to the histories of the wars that were increasingly coming to publication, some of which were critical of the Duke. Fortunately, Wellington was for the most part out of government during the 1830s and had leisure to work with Gurwood on the project. Above all, it allowed Wellington to have the case made for his generalship in his own words without engaging directly in discussion with individuals, and without having to argue it at first hand.

Wellington’s reputation
This publication of the Dispatches had the effect of deepening the appreciation of the Duke’s position. For those who cared to read them — and the abridged edition must have been found on the bedstands of many who fancied a military life for themselves — there was a wealth of detail. Even politicians who had not appreciated at the time what Wellington had done were magnanimous when the material came to print: the Whigs in particular, had attributed much of the Duke’s success to his subordinates. That view could no longer stand.