This article describes the Wellington Arch at Hyde Park Corner in London, built to commemorate British victories in the Napoleonic wars. 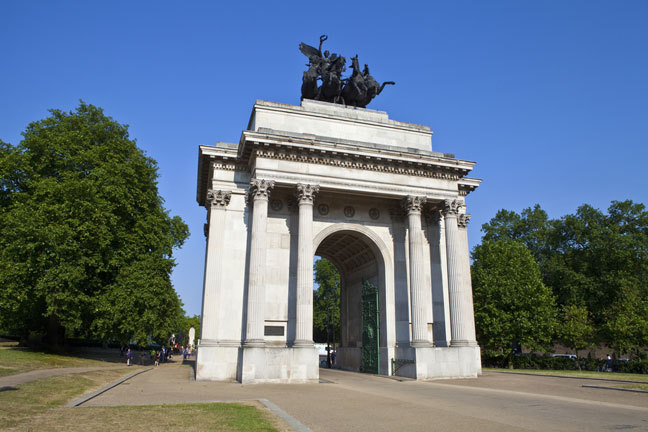 Built in 1825–7, the Wellington Arch at Hyde Park Corner, London, was intended as a victory arch to commemorate the British victories in the Napoleonic wars.

Both the Wellington Arch and the Marble Arch were designed to form entrance arches to the newly-built Buckingham Palace — the Wellington Arch was conceived as an outer entrance to the palace area, in Green Park. They were part of a group of projects intended to improve the city and the royal parks. These arches were based respectively on those of Titus and Constantine, in Rome, and were intended to be decorated with sculptural celebrations of British military victories.

Designed by the young Decimus Burton (1800–81), who was to become a highly successful architect, the Wellington Arch was originally planned as part of a single composition with the Hyde Park screen, which was also designed by Burton. Apsley House, the London residence of the Duke of Wellington, adjoined this screen.

The Wellington Memorial
As early as the 1820s, it had been intended to erect a statue of the Duke of Wellington close to Apsley House, and a formal Wellington Memorial Committee was established in the 1830s. Raising a subscription took time. The idea for an equestrian statue of the Duke seems to have originated with John Wilson Croker (1780–1857), who was a member of an inner group in the committee (it had 80 members in all) and who had long been Secretary to the Admiralty. Croker had worked with Wellington when the Duke was Chief Secretary for Ireland, c.1808, and they were lifelong friends. The statue was not commissioned until 1838 — from Matthew Cotes Wyatt (1777–1867). Starting out as a painter, Wyatt turned more to sculpture from 1815 onwards and received the patronage of George III: his equestrian statue of George III, unveiled in 1836, is considered among his best work.

In 1846, the Green Park arch was chosen as the site for Wyatt’s equestrian statue of the Duke. Despite Croker’s enthusiasm, the statue of Wellington was problematic from the outset.

Why was a Wellington statue controversial?
Wyatt had been selected without competition and some suspected jobbery; but the committee of subscribers approved the commission in July 1839 — and the government then advised Queen Victoria to give her permission for the statue to be mounted on the arch. The statue was heavily criticised: at 30 feet high it was disproportionate to the arch on which it was placed, dominating the skyline. It also was so heavy the arch had to be reinforced to take it. Punch magazine, which lampooned the statue as oversized and ruining the arch aesthetically, noted that ‘as the arch at Hyde-Park-Corner is a very respectable structure, it is too bad to allow the DUKE of WELLINGTON to ride rough-shod over it.’

Although not necessarily fond of the statue and its proximity to Apsley House, Wellington was sensitive to the consequences of removing it. It was disliked by Decimus Burton, the original architect of the arch, who left money in his will for its removal. Even though Queen Victoria shared the dislike of the statue, she rejected all requests for it being moved during Wellington’s lifetime, to avoid giving the impression of insulting the Duke.

Equestrian statues
Using equestrian statues to celebrate military heroes was a practice that dated back to classical times. The importance of antiquity in influencing the construction and definition of heroism cannot be understated. In ancient Rome, equestrian statues commemorated military leaders who wished to emphasise the active leadership of the equites, the equestrian class or knights. This tradition of monumental equestrian bronze statues was revived during the Renaissance, in works such as Donatello’s equestrian statue of Gattamelata in Padua, and served as a precedent for later works.

The statue is removed
In 1883, when the Wellington Arch was repositioned to improve the road layout in that area of London, Wyatt’s statue was taken down. While the Arch was rebuilt in its new location reusing all the original Portland facing masonry, the equestrian statue was not replaced. Instead, a smaller equestrian statue of Wellington was commissioned from Joseph Edgar Boehm to stand on a plinth nearby. The quadriga — a four-horse war chariot — that Burton had originally envisaged topping the arch was finally added in 1912, when the bronze by Adrian Jones was installed.

At the suggestion of the Prince of Wales, the future Edward VII, Wyatt’s statue of Wellington was transferred to Aldershot, Hampshire, in 1884, where it was reassembled on Round Hill close to the Royal Garrison Church. It was officially handed over to the Aldershot Division by the Prince of Wales in August 1885. 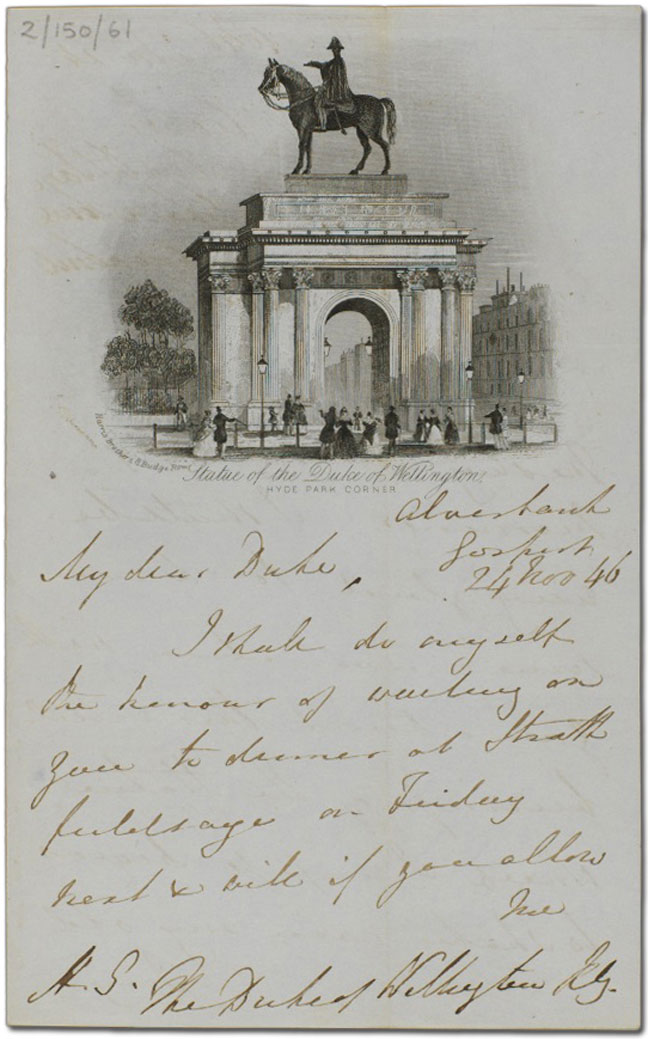 Croker celebrated the siting of the statue on the arch with an engraving of it on his letterhead. Here he writes to the Duke of Wellington. A similar engraving appeared in the Illustrated London News. © University of Southampton Library, MS 61, Wellington Papers 2/150/61.