We have learnt that each year there are 15 million newborns born into 4 different worlds, with very different chances of survival if born prematurely. Of these 15 million births, 1 million of these babies die due to preterm birth, and 70% of these deaths are preventable with inpatient care.1,2

The opportunities for intervention come at two critical times: just before birth, with corticosteroids, tocolysis, magnesium sulphate, and antibiotic prophylaxis; and the period just after birth, with thermal care of the newborn, and respiratory support with oxygen or continuous positive airway pressure.3 In this step we will focus closely on a key postnatal strategy: Kangaroo Mother Care (KMC).

But what does this mean in practice? Since scale up of KMC has begun, it has been applied in many ways, with variation in what is considered early, continuous and prolonged skin-to-skin contact.4 In order to be early enough to prevent the 75% of neonatal deaths which occur in the first week, skin-to-skin contact should be initiated within the first few days after birth, preferably in the first day.1 Continuous and prolonged means minimising disruption in skin to skin contact and maximising the duration, aiming to achieve 18 hours or more each day. 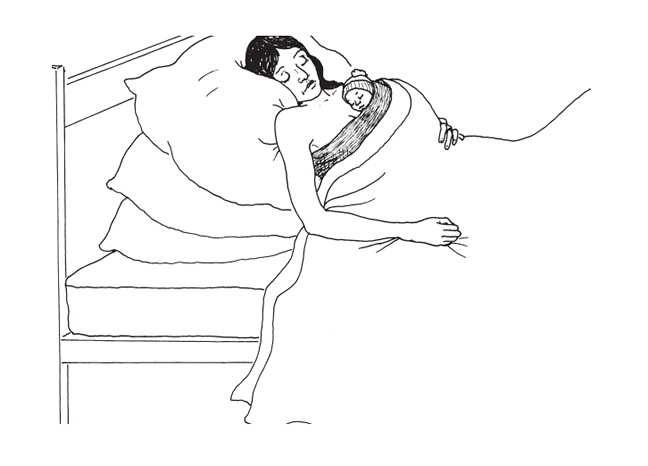 Figure 1 A mother sleeping with her newborn in the Kangaroo position.

Who is it for?

The best evidence for improvements in survival with KMC is for babies born weighing less than 2500g and the WHO recommends that almost every small baby can be cared for with KMC.5,6

The mother’s suitability must also be taken into consideration. Although any person can provide the skin to skin aspects of KMC, and family members are encouraged to do so to provide respite, the critical element of frequent or exclusive breastfeeding can only be provided by the mother. She must therefore be willing, healthy enough, and have sufficient family support to be able to commit to being in the hospital full time with her baby.

Once the newborn has reached at least 1500g, is in good general health, and is achieving consistent adequate weight gain, KMC may be continued in the community. Once home they should receive follow up at least weekly, with KMC carrying on at home until the newborn achieves a weight of 2500g.5

What are the benefits and how does it achieve them?

KMC reduces all-cause neonatal mortality for babies born less than 2500g by 40%.6 The skin-to-skin contact along with the resultant increased breastfeeding appears to achieve these improvements through cutting rates of hypothermia and infections, along with earlier recognition of illness.6 The early, continuous, and prolonged skin to skin contact has been shown to improve bonding, maternal responsiveness to babies’ needs, and lactogenesis, and result in newborns receiving KMC gaining an additional 4 grams of weight every day compared to babies receiving normal care.6

What coverage has been achieved and what do we hope to achieve in the future?

Unfortunately, coverage of KMC has always lagged behind the evidence of its effectiveness. Thirty years after the principles of KMC were first published by UNICEF in 1984, only 44% of countries reported having a policy for KMC.7 However, some countries have made strong progress: Mali, Malawi, Rwanda, and Uganda have some aspect of KMC in 95% of facilities.7 The every newborn action plan, a global strategy for reducing neonatal mortality to less than 10 per 1,000 live births by 2030, includes specific targets for KMC, highlighting its central role in reducing newborn mortality.8

In order to chart the way to achieve these goals, Vesel et al performed an assessment of health system bottlenecks which were preventing scale up of KMC across 12 low- and middle-income countries.7 They found bottlenecks for scaling up KMC in all 7 WHO building blocks for health care systems.7,9 Details of the 5 most significant bottlenecks and priority actions to overcome them are shown in the figure below. 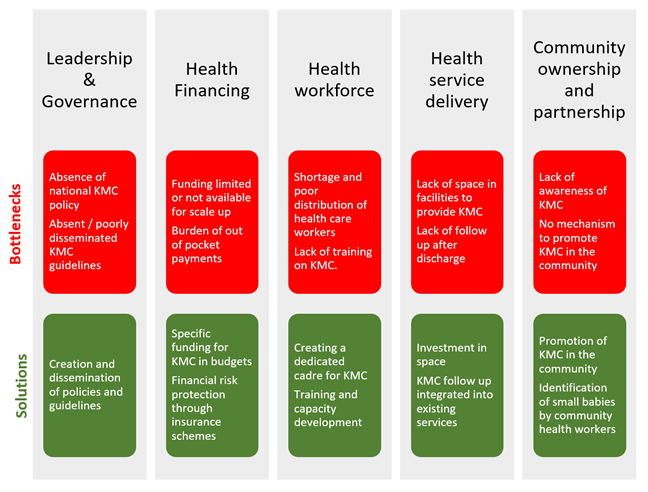 What are the evidence gaps?

Facility-based KMC places a substantial demand on the mother and her family, as she may need to spend many weeks in a facility far from home in order to provide it. If KMC could be provided in the community from the outset, this could deliver the benefits of facility-based KMC while minimising these negative consequences. However, the evidence base for community KMC is lacking. The data we have displayed regarding coverage have been pulled together from several ad hoc studies. No formal international mechanism for monitoring implementation of KMC has been established. Without up-to-date information it is difficult to target technical and financial support to increase coverage in areas falling behind.

Is KMC provided in your health care system? If so, in what form is it implemented? What do you think the barriers are to increasing coverage of KMC in your own setting? How do you think they could be overcome? How could the evidence gaps be filled?