Find out more
Home / Healthcare & Medicine / Improving the Health of Women, Children and Adolescents: from Evidence to Action / Donor funding for women’s and children’s health

Low- and middle-income countries (LMICs) have three sources of funds they can use to finance women’s and children’s health: (i) domestic government financing raised through taxes and government revenues, (ii) directly from health service users, either as user fees or pooled as part of an insurance programme, and (iii) external financing provided by donors.

In LMICs, donor financing plays an extremely important role in financing key services for women and children. However, unlike the other sources of financing, recipient governments have less control over funds coming from donors. Volatility of external funding can have substantial consequences on governments’ ability to provide services and plan future budgets, hindering accountability to their own populations. It is therefore essential to keep donors accountable for spending on women’s and children’s health, to track their ability to fulfil funding pledges, and the distribution and quality of their aid.

How do we track donor funding for women’s and children’s health?

When tracking donor funding for women’s and children’s health, three things must be considered: data, definitions and analysis. It is important to consider these choices carefully, as they can have a substantial impact on results.

There are a number of sources of data on funding for women’s and children’s health. The Creditor Reporting System (CRS) of the Organization for Economic Development and Co-operation (OECD) contains data on every aid transaction made, classified under a number of fields, including purpose, sector, donor and recipient. Most donor tracking studies and databases are based on this database. The Countdown to 2030, an initiative set up in 2003 with the purpose of tracking progress towards women’s and children’s health 1, has produced an open access database of project-level funding for Reproductive Maternal Child and Newborn Health (RMNCH) by donor and recipient 2. AidData is an open access database produced by the College of William and Mary, which includes data from the CRS plus donors not reporting to the OECD, such as China. Finally, the Institute for Health Metrics and Evaluation (IHME) has produced a database on Development Assistance for Health, which is updated annually, and contains data on maternal, newborn and child health from donors reporting to the OECD as well as some private foundations.

Definitions are essential. Researchers must decide both what type of funds should be classified as aid (for instance grants versus loans), and which funds should be classified as benefiting women’s and children’s health (for instance should sexual health and malaria projects be included?). For a comprehensive review of how decisions on data and definitions impact results please see a recent article by Pitt et al. (2018)3.

Finally, there are a variety of ways in which donor funding for women and child health can be assessed. Previous studies have examined trends in total funding for women’s and children’s health, the distribution of funding according to need4, prioritisation of different sub-groups5, and quality of aid6.

How much donor funding is available for women’s and children’s health? 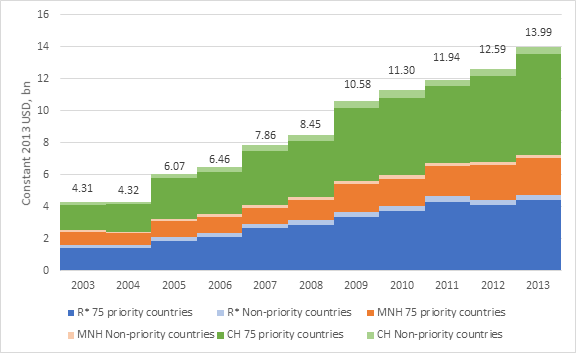 Now that we have seen how donor funds for women’s and children’s health can be analysed, let us see some results. The results presented in this section come from the Countdown project. Figure 1 shows donor funding for RMCNH between 2003 and 2013 for the 75 Countdown priority countries (accounting for over 95% of all maternal and child deaths), and other recipients of aid (non-priority countries). Total funding for RMNCH increased from $4.31 billion in 2003 to almost 14 USD billion in 2013; however, increases were much more pronounced in the earlier part of the time period, with a plateauing of funds from 2009. Child health received the most funding ($6.8 billion in 2013, 48% of all funds to RMNCH), followed by reproductive health (which includes HIV, $4.7 billion in 2013, 34% of all RMNCH funds), with maternal and newborn health receiving the least funding ($2.5 billion in 2015, 18% of all RMNCH funds)4.

The top donors for women’s and children’s health during the time period of 2002-2013 were the United states ($32 billion), the Global Fund for TB Aids and Malaria ($11 billion) and the United Kingdom ($7·3 billion). Although countdown priority countries received most of the aid funding available for RMCNH, funds were not allocated equally between countries. There were for instance substantial disparities in per capita funding for child health, with São Tomé and Príncipe receiving $103 of aid for child health per child, compared to Mexico’s $0.074. Trends over time show that RMNCH has become better targeted to need4. Despite this, funds have been increasingly disbursed outside of government channels, and through an increasing number of donors and mechanisms, undermining recipient government’s capacity to plan and deliver services efficiently6.

The global community is facing an estimated $33.3 billion funding gap to meet the targets of the Global Strategy for Women’s, Children’s and Adolescents’ Health (2016-2030)7.

As the amount of donor funding available for women’s and children’s health plateaus, there has been increasing recognition that countries need to look for alternative sources of funding to meet funding gaps. The Global Financing Facility for Women Children and Adolescents (GFF) was established in 2015 to help governments in low- and lower-middle-income countries catalyse investment in the health and nutrition of women, children and adolescents. The GFF aims to increase funding from four sources: domestic financing, the World Bank, other donors and private actors. The GFF currently works in 27 LMICs through a country-led approach, where all parties agree a common plan and financing framework for women’s and children’s health. The GFF has developed a monitoring framework to assess progress towards funding for health and nutrition of women, children and adolescents. Over the next few years we will be able to learn whether its approach succeeded both in leveraging extra funds and in improving the lives of women, children and adolescents.