Article describing funding for child health.
© London School of Hygiene & Tropical Medicine
In 2015, Arregoces and colleagues conducted an analysis of selected donor funding for women’s and children’s health worldwide for the period 2003-2012. This work forms part of Countdown to 2015, and is intended to help assess whether donor funding is going to the countries and conditions that most need it, and to promote accountability for change if that is not the case. The 75 Countdown countries were prioritised for support to meet MDG 4 (reduce child mortality) and MDG 5 (improve maternal health), since over 95% of all maternal and child deaths occur in these countries.

Official Development Assistance (ODA) is a record of the amount of international aid received from all donors. This is reported to the Creditor Reporting System of the Organisation for Economic Co-operation and Development (OECD). This aid comes from:Donors not reporting to the CRS, such as China, were not included.In the analysis, grants given by the Bill & Melinda Gates Foundation from earlier years that are also reported to the CRS were added to ODA values, resulting in what they called ODA+.1

Globally, high level commitments have been made to meet MDG 4 and MDG 5, and these commitments must be matched by funding pledges. Bilateral aid remains the dominant source of funding for reproductive, maternal, newborn and child health (RMNCH). 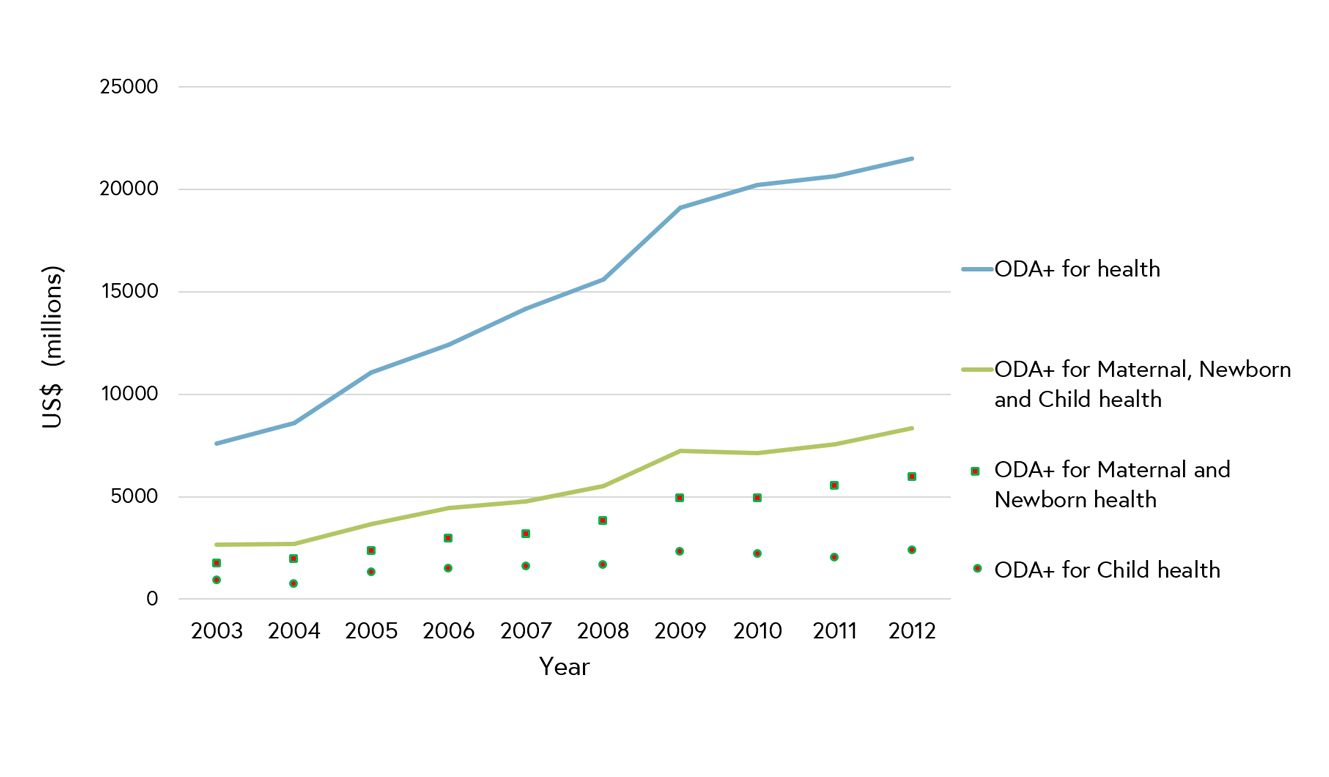 View Course
The majority of ODA+ for maternal, newborn and child health was spent in the 75 Countdown countries that suffer the highest mortality burden, and this share remained constant over time. In 2003, 77% of ODA+ spending on maternal, newborn and child health (MNCH) occurred in the 75 priority countries ($2.0 billion of the total $2.7 billion spent worldwide); compared to 74% in 2012 ($6.2 billion of the $8.3 billion spent worldwide).In 2011, ODA to MNCH reduced for 60% of the 75 priority countries relative to 2010, with an increase in MNCH noted for only 40% of countries. Half of the countries that had a reduction in ODA to MNCH in 2011 had a further reduction in 2012. Of the 75 priority countries, Ethiopia received the largest level of ODA to MNCH in 2011 and Nigeria received the largest level in 2012. Turkmenistan received the lowest level of ODA to MNCH in both years. Mexico, China and Brazil, who are all middle-income countries, received the least ODA to child health per child and to MNH per livebirth in 2011 and 2012.

Just under 20% of funding to child health is for immunisation projects. While ODA mentioning newborns has increased from previous years (now at $1 billion, a 34-fold increase since 2003), this is most commonly alongside maternal and/or child health. The proportion of ODA noting interventions exclusively benefiting newborns, was only $6.0 million in 2012, representing 0.3% of ODA to maternal and newborn health. Whilst this is a 6.5-fold increase relative to 2003, the proportion remains very low given 45% of child deaths are now neonatal.
© London School of Hygiene & Tropical Medicine

Hi there! We hope you're enjoying our article: Donor funding for women’s and children’s health
This article is part of our course: Improving the Health of Women, Children and Adolescents: from Evidence to Action