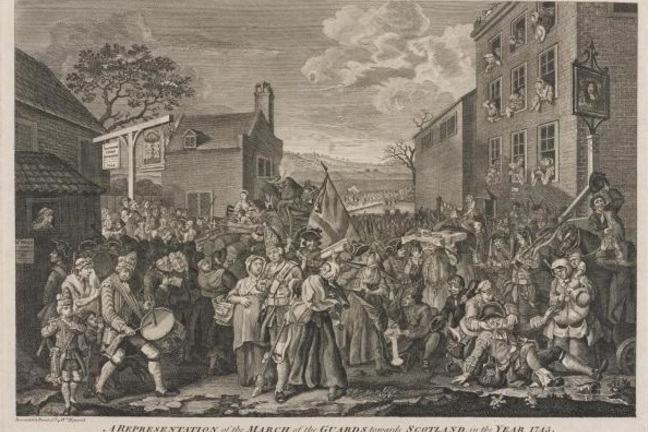 Engraving entitled "A representation of the march of the Guards towards Scotland in the 1745", from a painting by W. Hogarth/M.1954.508

The army on the move

The next few short paragraphs condense almost nine months of relentless marching, skirmishes, a siege, battles and the eventual retreat of Prince Charles Edward Stuart and his army.

For six months, from October 1745, to April 1746, the Prince rode or marched with his supporters from Scotland through England, taking Carlisle, Manchester and other English towns.

You can download a map at the end of this article, to help you follow the route taken by the prince and his Jacobite supporters.

The Jacobite forces numbered just under 6,000 men and included French and Irish troops. Four French ships had been despatched with weapons and supplies.

On 4 December they reached Derby, a town only 100 or so miles from London.

Could the Jacobites take the capital city? Was a decisive military victory within their grasp?

The Duke of Cumberland, the youngest son of King George II, had been recalled from the war in Flanders to take command of the Hanoverian forces. A successful military leader, Cumberland was four months younger than Prince Charles – both men were just 24.

Charles received news that Cumberland’s troops were at Lichfield, just south of Derby. General Wade, a British army officer who had served in the 1715, was leading a regiment approaching from the north; and an army was reputedly gathering on Finchley Common to defend London.

The Prince was determined to head further south, although the expected support from English Jacobites and promised French reinforcements had failed to materialise. His commanders advised a retreat north.

On Friday, 6 December – a day known to Jacobites as Black Friday – the retreat to Scotland began.

There has been much debate about the decision to retreat north from Derby. With the benefit of hindsight, it may appear that the Jacobites would have had a good chance of capturing London.

But for a small force of men that had covered a substantial geographical distance in a short period of time and with the prospect of being surrounded on three sides and outnumbered by professional troops, retreat seemed the only sensible option.

At the top of this page, we have reproduced an engraving entitled “A representation of the march of the Guards towards Scotland in the 1745”, from a painting by William Hogarth. It shows the chaotic scene at the Tottenham Court Road Turnpike, at the intersection of the Euston and Hampstead Roads, as the British Army assembles to march north to Scotland to put down the Jacobite Rebellion. The central figure is a bemused soldier, accosted on one hand by a young pregnant ballad singer and on the other by a screaming hag waving a copy of the (Jacobite) journal.

At the battle of Falkirk on 17 January 1746, the Hanoverian force commanded by General Henry Hawley were subjected to the Highland charge which had previously proved so successful at the battle of Prestonpans.

This was to be the last Jacobite victory.

The Prince and his council of war, led by Lord George Murray continued to disagree over strategy. The commanders won and the army continued north.

The reluctant prince was now heading ultimately for Inverness and the final bloody battle at Culloden.