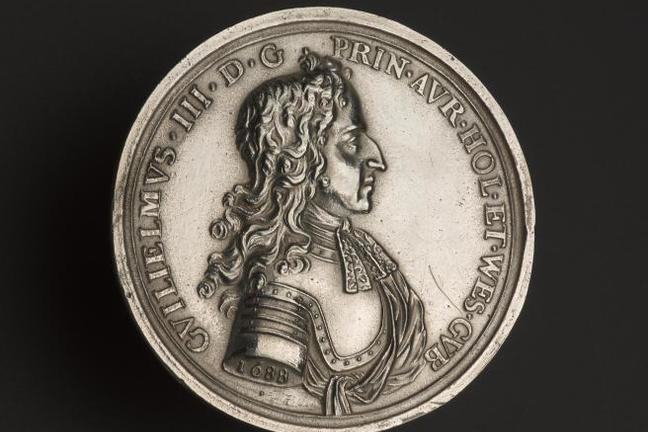 Silver medal of William III of Orange on his landing at Torbay, 1688/H.R 71

We have seen how the birth of Prince James Francis Edward increased the likelihood of a continued Catholic succession.

Opponents of the Stuarts took extreme measures and invited James’s Protestant son-in-law, William of Orange to land an invasion force in England with the aim of deposing James.

William arrived at Torbay, in the southwest of England, in November 1688 with 14,000 troops. His forces met with little opposition. Many of those formerly loyal to James VII and II changed their allegiance.

When widespread anti-Catholic riots broke out James sent his wife and six-month old son to France, in December 1688.

Attempting to follow them, James was captured near the Kent coast. William arrived in London on 18 December. Rather than imprisoning James he allowed him to sail for France, where he was reunited with his family.

In February 1689 William and his wife, Mary (James’s daughter) were proclaimed King and Queen of England. Scotland declared them in April.

Supported by 5,000 French troops, James landed in Ireland on 12 March 1689. He was confident his Catholic subjects would support his challenge. In June 1690, William landed at Carrickfergus. By July, James, defeated, fled to France.

There were now two Stuart Courts. The exiled king and his supporters became known as Jacobites from the Latin for James – Jacobus