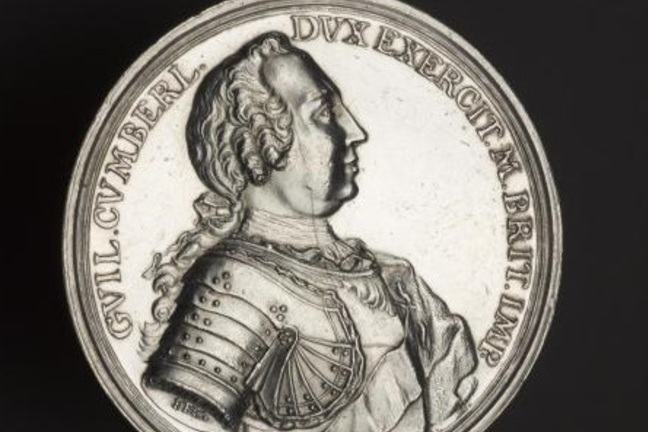 Silver medal of the Duke of Cumberland on the Defeat of the Jacobite Rebellion, 1746

In an earlier step we saw how the British army pursued the Jacobites who had been scattered after the battle at Culloden. Little mercy was shown to the wounded or to the remnants of broken Jacobite regiments, and fleeing soldiers were chased down and killed along the road to Inverness.

The brutal treatment suffered by the defeated Jacobite army at Culloden was only the beginning of a wider campaign of reprisals. Highlanders who had taken up arms in the Jacobite cause were dealt with as rebels and traitors.

In the months following the battle, Jacobite military forces were still active in parts of the highlands. British troops occupied and laid waste to areas of Jacobite support, rounding up suspects, burning houses, driving off livestock and dealing out summary justice.

This was a campaign of terror intended to ensure that the Scottish Highlands would never again provide military support for the Jacobite cause.

Even staunch Hanoverian supporters were shocked by reports of the atrocities taking place.

The immediate reprisals did not last long, but with them came a series of measures designed to attack the power structures and martial culture of the Highland clans.

The carrying of weapons and the wearing of highland dress in Scotland was banned, and highland chiefs were stripped of their powers of justice.

The entirety of the Scottish Highlands was brought fully under the control of the Hanoverian state.

What do you think of the government response to the 1745 Jacobite rising? Add your comments below.