Discover the importance of LGBT History Month in the UK, and why it’s so important, as well as how it’s tied to diversity and inclusion in education. 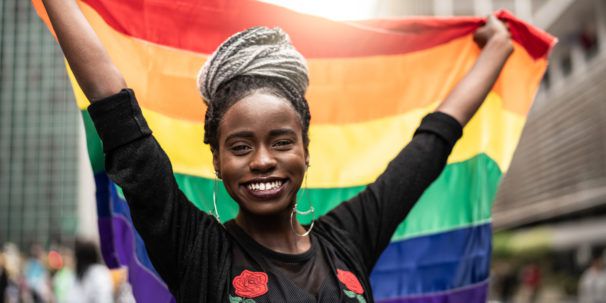 February is LGBT History Month in the UK. This annual month-long celebration aims to raise awareness of LGBTQ+ people and history, particularly among young people. So why is this such an important occasion? And what are the origins behind it? We explore the story behind LGBT History Month and what it means today.

We’ll also look at the close ties between LGBT History Month and issues of diversity and inclusion in education. As we’ll see, despite a lot of progress, there are still many challenges ahead that we can address together.

What is LGBT History Month?

The annual LGBT History Month is a celebration that promotes awareness and education of the issues faced by the LGBTQ+ community. It’s a way of promoting inclusivity and teaching young people about the history and lives of LGBTQ+ people.

In the UK, the celebration is organised by Schools OUT UK – The LGBT+ Education Charity. Their ultimate aim is to promote equality and diversity for the benefit of the public. As well as working to raise awareness, they also aim to ensure that educational institutions are safe spaces for those in the LGBTQ+ community.

Why is LGBTQ History Month important?

LGBT+ History Month is an annual celebration of lesbian, gay, bisexual, trans, and non-binary history. As well as providing role models and support for young people, it also helps draw attention to the history of the civil rights movements of the LGBTQ+ community.

It’s a time to remember those people around the world without rights, as well as to recognise the struggles of the LGBTQ+ community to gain rights. By raising awareness of the often hidden or erased history of LGBTQ+ people, we can give young people a chance to learn about people that share their identity.

When did LGBTQ History Month start?

LGBT History Month was founded in 1994 in the US, where it’s celebrated in October to coincide with National Coming Out Day. October also marks the first and second LGBT Marches on Washington.

In the UK, the event takes place in February, and the first LGBT History Month took place here in 2005. Two teachers and LGBT activists, Sue Sanders and Paul Patrick, organised the event through their Schools Out project.

They chose February as it marked the month in 2003 when Section 28 of the 1988 Local Government Act was abolished. This act prevented local authorities from ‘intentionally promote homosexuality or publish material with the intention of promoting homosexuality.’

Each year, the celebration has a theme, and since 2011, this theme has been linked to the National Curriculum. For 2021, the subject is PSHE, and the theme is ‘Body, Mind, Spirit.’

Diversity and inclusion in education

One of the key elements of LGBT History Month is the celebration and promotion of diversity and inclusion in education. This strive for a more inclusive learning environment means that students and individuals in education are treated fairly and equally, regardless of their race, gender, age, disability, religion or sexual orientation.

According to the Stonewall School Report of 2017, while anti-LGBT bullying and language have decreased across Britain’s schools since 2012, there is much still that needs to be done. Almost half of all LGBT pupils still faced bullying for being LGBT. Shockingly, more than two in five trans youth had tried to take their own life.

Events such as LGBT History Month help to promote LGBT-inclusive teaching and education. They give young LGBT people and those with LGBT families the chance to see themselves reflected in what they learn. It also encourages an inclusive and accepting attitude from all students.

There have been positive changes as a result of such campaigning. In April 2019, for example, the UK government announced that pupils in schools in England must learn about sexual orientation and gender identity. What’s more, all primary schools must teach about different types of families, including LGBT families.

As the Stonewall report and other research have highlighted, more needs to be done to make education inclusive. A 2018 report from the UK government found that, on the whole, LGBT students do not feel their needs are addressed. This is felt particularly strongly in areas of sex and relationships education.

LGBT History Month continues to raise awareness and promote an inclusive approach to education. At FutureLearn, this is a sentiment we’re very much behind. Diversity and inclusion are at the heart of our policies, meaning we have zero tolerance to exclusion, and we have taken drastic internal measures to enforce it. There are no nuances; zero is zero.

Using the internal speak up channel, our colleagues feel that they can raise issues without the risk of retaliation and that there is due follow up process. We also have appointed a volunteer Diversity and Inclusion champion amongst staff, acting as another impartial route for conversation. This is an expansion on our existing champion programme, which has helped to support colleagues through mental health issues, bereavement, and domestic abuse.

We also have a diverse range of courses and learning opportunities on our platform that promote diversity and awareness. Whether it’s through exploring inclusion in education or the history of sex and gender, we’re proud to support LGBT History Month and the LGBT+ community.